You are at:Home»Politics»Media»London’s original graffiti artists were poets, playwrights and revolutionaries

Roger Perry’s long out-of-print The Writing On the Wall – a collection of photos charting London’s early graffiti scene – is being republished this week. Here, George Stewart-Lockhart – an art historian and publisher who wrote the extensive new foreword for the re-release – takes us through a few of his most striking images.

London’s graffiti culture hasn’t always revolved around big bouncy graphics and Shoreditch street art tours. Forty years ago, in the wake of the 1968 Paris riots, London was engulfed by a wave of politically charged and poetic statements, scrawled on the corrugated iron fencing and dilapidated buildings of Notting Hill by members of the disillusioned post-war generation.

Their style was unlike the one beginning to take off in New York at the time. Where Manhattan’s trains were sprayed with the kind of wildstyle you’re now likely to see in shoe shop window displays, the focus of London’s graffiti writers was the message; style wasn’t important. More Blake than Basquiat.

The culprits weren’t “artists” in the sense they are now, but poets, playwrights, political revolutionaries and the saxophonist from Madness (who I’ll get to in a bit).

Those familiar with the burgeoning graffiti scene of the time (not that there was really much of a “scene”, per-se) would be acquainted with the work of the Wise Brothers. Dave and Stuart Wise were better known as part of King Mob, a mutation of Guy Debord’s Situationist International, and were responsible for a number of the period’s most iconic pieces of graffiti. 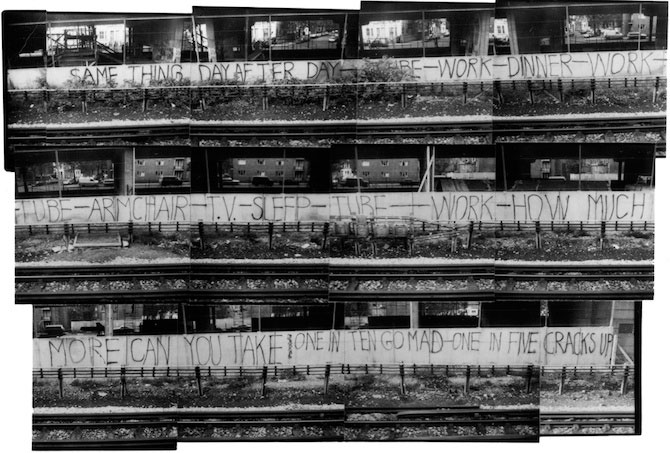 One work of theirs sticks out in my mind: a lengthy tirade against the banality of commuter life, written alongside the Hammersmith and City line – between Ladbroke Grove and Westbourne Park stations – in the shadow of the Westway. It was a collective effort by Dave Wise, Chris Gray, Don Smith and Madeline Neenan, and actually precedes the May 68 riots, having been painted in January of that year.

The tradition of tracksides is well established now, but this would have been one of the very first – certainly in London, at least. Take the train along this line now and the walls are cluttered with layer upon layer of tags and throw-ups (a slightly more complex tag), some of which don’t last more than a few weeks before either being painted over or buffed. I get excited when I spot a single rogue “Tox04” that may have survived the last ten years, high up and inaccessible on a railway bridge. But this was prime trackside that stood untouched for a decade. In modern terms, that’s pretty extraordinary. 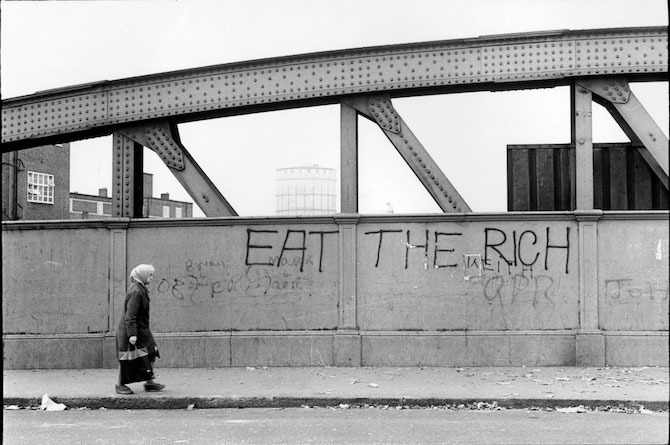 In a bizarre synchronicity, Banksy would work from a studio directly behind this piece around 30 years later. Mind you, graffiti culture has continually been drawn to this small section under the Westway, so perhaps it’s not so bizarre. When legendary graffiti writer Futura 2000 came over to London in 1981 to hang out with The Clash, for example, he painted a wall under this innocuous stretch of dual carriageway, bringing modern graffiti as we know it to the UK.

Another key player in the scene at the time (again, there wasn’t really a “scene”, so to speak) was Heathcote Williams, who’s now best known for his epic polemical poems, such as “Autogeddon” and “Whale Nation”. But back before Harold Pinter was praising his work, he ran a large squat in Notting Hill inside an old bingo hall, known as the “Meat Roxy”, which was part of the Albion Free State – his utopian vision of a Britain without government or rule. 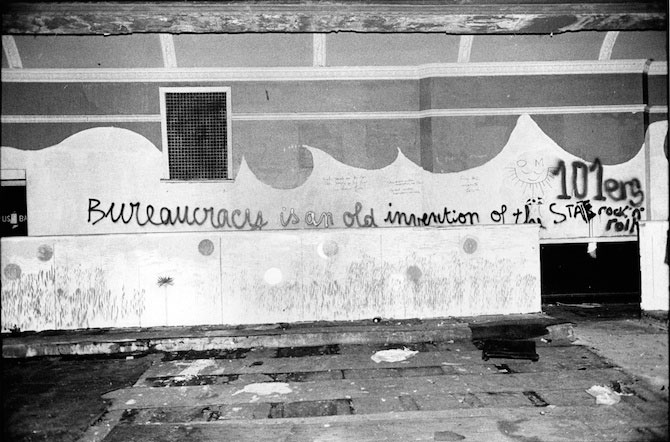 The squatters frequently held gigs there, with Gong collaborators Here & Now playing regularly. The photo above is an interior shot of the Meat Roxy, showing a tag left by the “101ers”, a short-lived pub rock band fronted by Joe Strummer before he joined what would soon become The Clash.

When Heathcote wasn’t at the helm the Albion Free State, working at his “Ruff Tuff Creem Puff Estate Agency for Squatters” with writer and comedian Tony Allen, he would be adorning the walls of North Kensington with his own brand of humorous graffiti.

The Heathcote piece in the above photograph was painted on the eve of Princess Anne’s 1973 wedding to Mark Phillips. It references the Princess’s trip to Kenya in 1971, where she was accompanied by Blue Peter OG Valerie Singleton. The simplicity and absurdity of the humour speaks for itself.

It would be wrong to think that all graffiti at the time was antagonistic or poetic in its execution. Much like today, there were also a number of prolific taggers – none more so than a writer by the name of “Kix”, who worked mainly around his native Kentish Town (some of his graffiti from the early 70s survives there to this day).

Despite probably never having come across his work, you’ll almost certainly be familiar with the output from his day job. When he wasn’t tagging West London, Lee “Kix” Thompson was playing saxophone as a founding member of Madness, alongside – amongst others – keyboardist Mike Barson, known for his tag “Mr B”. 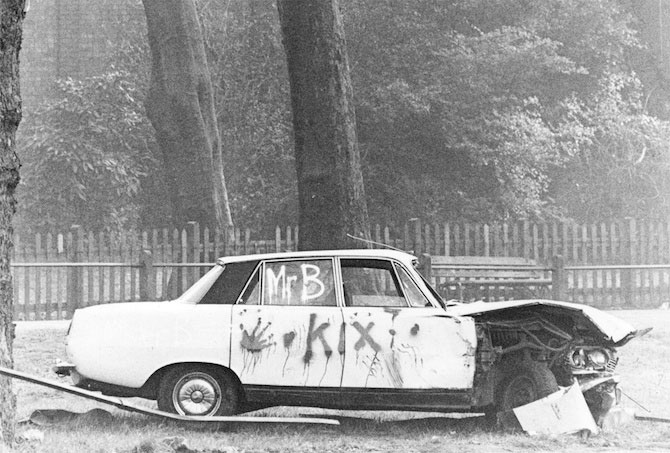 The image above stands out amongst the rest of Roger Perry’s photos, in that it isn’t anonymous. The majority of the works illustrated in The Writing On the Wall express some kind of group sentiment; whether its a plea for social housing or an affinity for the IRA, the graffiti usually let the combined voices of a certain section of society be heard.

These phrases can occasionally seem mundane to the modern viewer, but for them to have been committed to such a surface in the first place means they must have meant the world to whoever wrote them. A good example of this is the “Clapton Is God” image below. This was a sentiment felt and subsequently expressed by the vast majority of a certain generation. It became ubiquitous on the walls of London in the 1970s, with no fixed perpetrator. It was open-source graffiti. 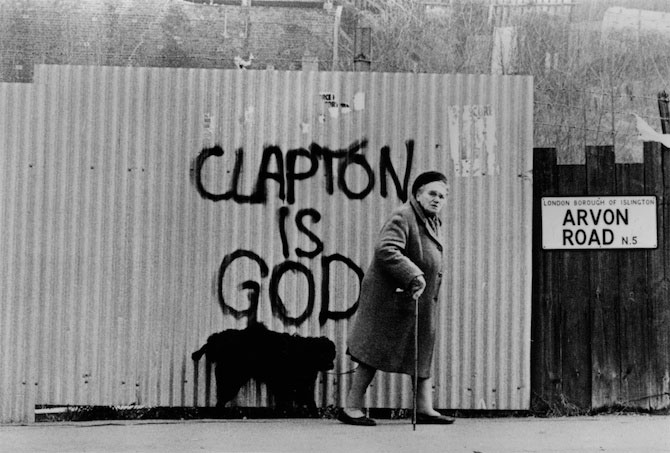 Roger Perry’s example was actually “faked”, in so much that it was needed for a book on Eric Clapton, but with a deadline looming they couldn’t find a suitable example anywhere. Determined, Perry headed out with graphic designer Pearce Marchbank and found a corrugated iron fence in North London. Perry was on lookout while Marchbank painted the proclamation on the wall.

While the majority of the assertions that “Clapton Is God” were unsolicited (save for the above example, obviously), the 70s saw graffiti being adopted by advertising agencies for the purpose of guerrilla marketing. Nowadays, this is common practice, but back then it was still somewhat of a novelty, particularly when the Rolling Stones decided to utilise the medium for the promotion of their 1974 album It’s Only Rock ‘n’ Roll. The less said about this, the better, as it marks a serious hijacking of what should be a powerful and independent way of expressing oneself, not a means to sell records.

The graffiti in Roger Perry’s photos is so far removed from that in Martha Cooper and Henry Chalfant’s seminal Subway Art that you can’t really compare them. What went on in London at the time was a cultural bubble. It wasn’t taking influence from the US, and in turn didn’t have any influence on it.

The London graffiti scene that we know today really owes more to what went on in New York, but that doesn’t make these works any less important. They are a uniquely English take on graffiti; charged with subversive humour and heartfelt poetic sentiment that is all but absent from the majority of work today. That isn’t intended as a knock to either party, but merely a statement of the facts. People’s priorities have changed, with use of colour and form taking more prominence than the message conveyed within those forms.

These images, along with over 120 others, are included in Roger Perry’s The Writing On the Wall, which includes an introduction by the late George Melly, a new text by Bill Drummond and an extensive foreword by George Stewart-Lockhart. Find more details at rogerperrybook.com.