You are at:Home»Politics»Black Lives Matter»The murder of George Floyd — just another day in Trump’s America

Whether is was the robotic-like lack of emotion on the face of Minneapolis police officer Derek Chauvin as he slowly choked the life out of George Floyd on the ground, keeping his knee on his neck for five long minutes despite Floyd screaming that he couldn’t breath, and despite him pleading; or whether it was the fact that Chauvin felt completely at ease in executing his prey in front of witnesses and in broad daylight; the image of him doing so was at that moment more representative of America than the Constitution, Bill of Rights, Statue of Liberty, or any of the baubles deployed in service to the myth of the United States as the land of the free.

Chauvin with his knee on the neck of a supine George Floyd was the acme of evil that is white supremacy. He was the overseer with his knee on the neck of a runaway slave. He was the Confederate Flag raised in triumph, the slaver’s whip, the lynch mob’s noose, the prison guard’s boot. In other words, Chauvin symbolised in those five horrifying minutes the entire legacy and long history of racial oppression in country that was born in genocide and developed and nourished for two centuries on the back of the African slave trade.

Here we are obliged to wrestle with an unvarnished truth — namely that though slavery in its chattel form may have been ended, the consciousness of the slaveowner remains alive and kicking within the diseased minds of racist white police cops all over that God-forsaken land. They are, in fact, less police officers protecting and serving, and more members of increasingly militarised right wing militia groups hunting for prey — black prey.

Trump’s election was a racist pushback against Barack Obama’s two terms in office. You don’t have to approve of Obama’s legacy as president (I certainly don’t) to appreciate the symbolism of a black American with an African name being elected to the highest office in America back in 2008. For racists everywhere it was a moment to mourn, with Trump’s championing of a birther movement designed to prove that Obama was not a ‘real American’, leaving not doubt that he was among them.

You see, it’s very simple. In the hearts and minds of white supremacists, black and brown Americans are not real Americans. They are instead a threat to real Americans, white and proud Americans, and thereby dehumanised, demonised, and ultimately murdered with impunity as such.

With Trump’s election as president in 2016 the KKK and every card carrying white racist and white supremacist in America finally got their most precious wish; they finally got their man in the White House. And since he entered it has been open season on black and brown people.

Shifting focus for a moment, the issue of racial oppression in America is hugely important for people of conscience and consciousness living outside America to understand. For if the most powerful truths are the most simply expressed, then who better than Malcolm X to remind us that ‘You can’t understand what’s going on in Mississippi if you don’t understand what’s going on in the Congo’.

And staying with Baldwin, when he averred that ‘To be a Negro in this country and to be relatively conscious is to be in a rage almost all the time’, he gave voice to the rage behind the riots that have taken place, and continue at time of this writing to take place, in various cities across the US in the wake of George Floyd’s execution.

Founding member of the Black Panther Party, Huey Newton, was not a man who ever wasted time in beating around the bush.

The racist dog oppressors have no rights which oppressed Black people are bound to respect. As long as the racist dogs pollute the earth with the evil of their actions, they do not deserve any respect at all, and the “rules” of their game, written in the people’s blood, are beneath contempt.

The militancy with which he was writing in 1967 was forged by racial oppression. As these words are being written a new generation of Malcom X’s and Huey Newton’s are likewise being forged. 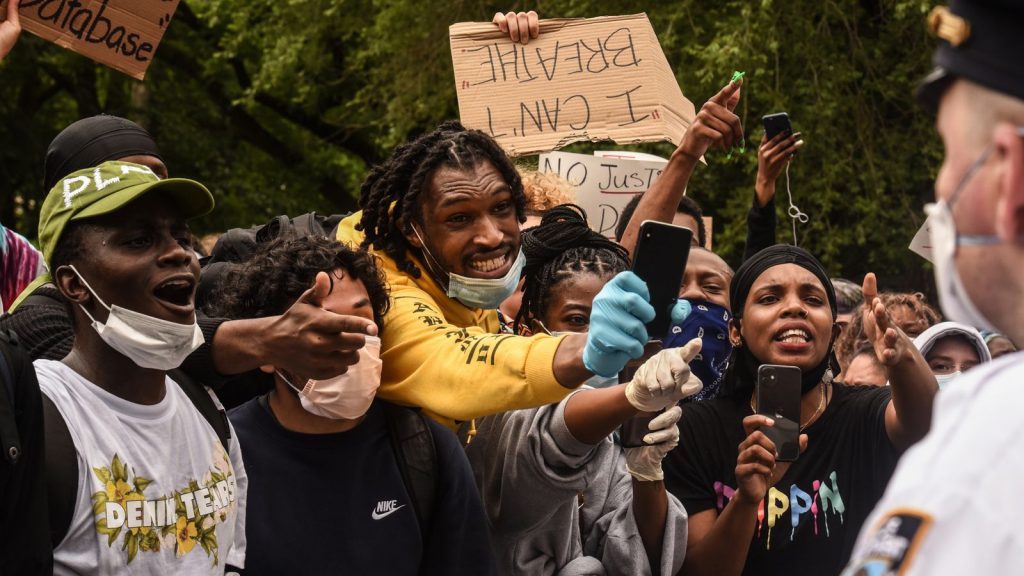 New York protest against the murder of George Floyd.

The people are rising in Minneapolis and across the US. The police station where Floyd’s murderer worked  was burnt to the ground  and there have been dozens of other protests across the whole country. As many protesters said ‘we’ve had enough’.

Solidarity with those who resist.