You are at:Home»Politics»Far Right»The Brexit traitor trope: how hard-right fantasies put us all at risk

With extremism on the rise in Britain, the use of toxic language over leaving the EU is dangerous folly. 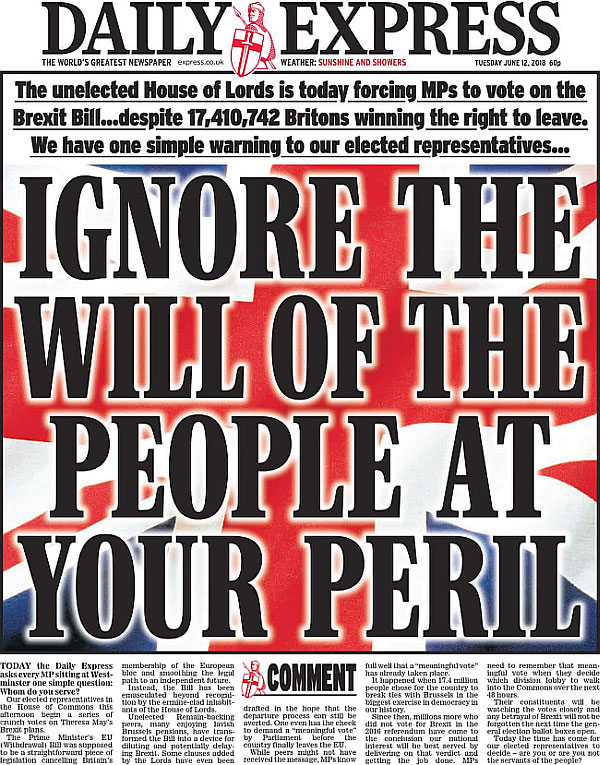 Oswald Mosley’s Blackshirts were a menace. So were the Nazi sympathies of many British aristocrats in the 1930s. Today’s ascendant far right poses its own unique dangers, using familiar tropes that have been fuelled and legitimised by the political and media elite – and there is all too little appreciation of where Britain could be heading.

Brexit, for the Tory right, was a national revolution: not simply a recalibration of Britain’s relationship with the EU but a blunt instrument to roll back progressive social norms. Those deemed to be critics or opponents were now enemies of the people, saboteurs, traitors, all splashed on newspaper front pages. A rising Labour left is portrayed as treacherous, in league with terrorists and foreign powers. For the hard right, in Britain and beyond, the left is an agent of the nation’s destruction because of its support for migrants and refugees, and opposition to anti-Muslim bigotry. Islamophobia is a respectable bigotry, fanned by national newspapers such as The Sun and The Times which are forced to publish corrections after publishing articles which twist the truth and whip up hatred, but by then the damage is already done.

A classic far-right trope has always been to portray opponents as betrayers of the nation. This week, it reached a zenith with the threatening Daily Express headline: “Ignore the will of the people at your peril”. Little wonder that the Labour MP for Wigan, Lisa Nandy, tweeted: “These front pages are not just disgraceful but downright dangerous. What the hell is happening to our democracy?” This while an alleged member of a banned neo-Nazi group has admitted to plotting to kill her friend and neighbouring Labour MP for West Lancashire, Rosie Cooper, with a knife. Jo Cox was murdered by a fascist terrorist almost exactly two years ago; the anti-Muslim terrorist Darren Osborne drove to London last year hoping to murder Jeremy Corbyn, and mowed down a group of Muslim worshippers, killing one; and four far-right plots were thwarted last year.

The profile of Stephen Yaxley-Lennon (or “Tommy Robinson”), who founded the English Defence League, flourishes despite, or perhaps because of, his being jailed last month for contempt of court. His growing far-right movement benefits from the promotion of bigotry by the media and political elite.

Today’s far right has many parents. The industrial era should not be glorified: many of the old jobs were dirty, unhealthy and often excluded women. But the disappearance of millions of secure manufacturing jobs under both the Tories and New Labour in favour of the service sector had far-reaching consequences. Much of the work that replaced them was not only lower paid and more insecure: it had less prestige. The old work often conferred a sense of pride. Well-paid, secure jobs for those who didn’t go to university disappeared, as did their communities based around mines, factories and docks. A sense of being ignored and abandoned set in. It nurtured grievances that waited to be fed upon.

The disappearance of secure jobs, stagnating living standards, the failure to build council housing, public services under strain: rather than being the consequences of an economic model rigged in favour of elites, these were blamed by politicians and the media elite on immigration. With the working class erased as a category – “we’re all middle class now” – and New Labour’s failure to fully reverse the social damage of Thatcherism, the demagogic deceit that politicians cared more about migrants, refugees and minorities than working-class people resonated with some who felt abandoned. Those who were struggling were encouraged to resent each other, rather than the elites. The diversity of many working-class communities was erased in favour of a besieged white working-class man, oppressed not because of his class, but because of his colour. And while immigration increased under New Labour, no positive case was made for it. The tabloids peddled vicious half-truths, myths and outright lies, while Blairite stalwarts such as David Blunkett spoke of schools being “swamped” by non-English-speaking migrants.

Enter Brexit. David Cameron argued for remain after spending years presenting immigration as a problem to be dealt with (“for too long, immigration has been too high”, he declared in 2011), and having set immigration targets he knew could not be met. Rather than engage with a referendum about our relationship with a trading bloc, some leave campaigners made the cynical decision to win by using toxic language about immigrants and refugees.Immigrants portrayed as potential rapists, murderers and terrorists; lies about Turkey joining the EU, leading to Turkish criminals flooding into Britain; Nigel Farage standing in front of a poster of mostly dark-skinned migrants with the headline: “Breaking point”. Millions of leave voters are not racists or bigots. The rhetoric of the leave campaign, however, gave renewed legitimacy to already deeply entrenched and systemic xenophobia and racism.

It will only get worse. The Tories’ Brexit strategy is, to put it mildly, bungled. The odds of a Brexit deal being negotiated to the satisfaction of the Tory hard Brexiteers are low. And what then? Another trope of the radical right is the “stab in the back” myth: the claim that traitors and saboteurs wrecked their sacred national project. Hysteria will be whipped up mercilessly by the rightwing media. And one of the chief beneficiaries will be an increasingly assertive and dangerous far right. There will be some voices who will point to this as further evidence that Brexit must simply be reversed, rather than a deal negotiated that reconciles a referendum result they did not want with the needs of Britain’s communities. But they spend all too little time understanding the factors that drove the referendum result – or how extreme rightwing elements will benefit if Stop Brexit aspirations are realised.

Were it not for Corbynism, the radical right would have a monopoly on resentment of the status quo, and would be even stronger. But the radical left has to better confront the expanding far right. When it mobilises on the streets, the left must do so in greater numbers. The left – from Labour to Momentum to the trade unions – must debate how it can more effectively organise in working-class communities. The far right is effectively using social media as a tool of radicalisation; the left needs a counter-strategy. There is an alarming lack of appreciation of just how dangerous this political moment is, or where we could be heading. The potential consequences should frighten us all.

Owen Jones is a Guardian columnist

Video: Tommy Robinson is not a free speech martyr