Manolis Glezos, the great Greek resistance hero is dead. We mourn his loss along with his comrades in Greece and througout the world. Below we publish the moving tribute from Panagiotis Sotiris. There are many such. This is Helena Smith in the Guardian. The left in Britain salutes Manolis. He was a true internationlaist. As a young man he climbed the Acropolis to tear down the flag of the Nazis. During the battles of the Eurozone crisis he launched with Mikis Theodorakis the Common Appeal for the rescue of the Peoples of Europe. A call for international solidarity. In Britain we responded and out of that appeal came the Coalition of Resistance the forerunner of the Peoples Assembly and the Greece Solidarity Campaign. In 2012 we sent a delegation to Greece, the first of many, in solidarity and we visited Manolis at his house. He welcomed us and spent considerable time talking through the crisis that Greece faced. We all owe him an enormous debt and will continue the struggle in his honour. RIP Manolis 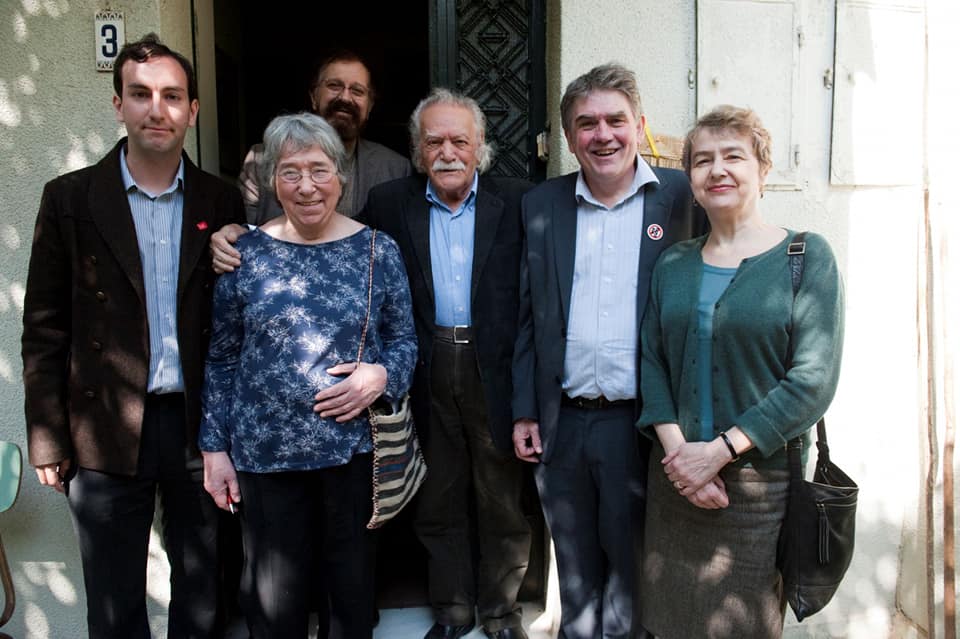 Manolis with the Greece Solidarity UK delegation 2012On the evening of Monday 30 March 2020, around 9 pm, one could hear people clapping their hands in many Greek neighborhoods. The clapping was followed by old partisans’s songs from the Resistance and in particular one called ‘Heroes’. In its lyrics one can find this line: ‘Heroes with twelve lives’.
If there was a person, that lived these ‘twelve lives’, this was Manolis Glezos, and the people clapping their hands in their balconies and shouting his name and playing old partisan songs were doing it to honor him, because today he passed away at the age of 98.
When Glezos was only 19 he made history, because along with his comrade Lakis Santas on the night of May 30/31 1941, just a few weeks after the Germans had entered occupied Athens, they brought down the Nazi flag from the Acropolis.
But this was just the beginning of eight decades dedicated to struggle. Active in the Resistance as a young communist, he would be arrested first by the Germans, later by the Italians and also by the Greek collaborators. His younger brother, Nicos, was executed by the Germans on May 1944. Glezos would always show the small note that his brother managed to write and throw out of the truck that was carrying him to the place of executions.
Manolis Glezos himself would be later condemned to death twice during the Civil War, but in 1950 his death sentences were commuted to life imprisonment. He would be liberated on 1954 only to be arrested again on 1958 on espionage charges and jailed until 1962 despite the international protests against the prosecution for such a symbol of the antifascist Resistance. After the 1967 Colonel’s coup he would be again arrested.
After the fall of the dictatorship he would not join any of the two Communist Parties that had emerged from the 1968 split and tried to revive EDA (United Democratic Left) which was the legal expression of the Left during the 1950s and 1960s. In the 1980s EDA cooperated with PASOK (and Glezos would be twice elected to parliament) but he would distance himself from PASOK. For some time he would be the elected president of his village in the island of Naxos, where he would try to experiment with forms of direct democracy. Active on the Left, in the 2000s he would participate in SYRIZA, being elected again to Parliament in 2012 and the European Parliament on 2014. When SYRIZA capitulated after the referendum, he distanced himself from SYRIZA and in the September 2015 election, he was a candidate with Popular Unity.
During all this time he would always be active in various movements. From the movement to demand German reparations to local struggles and movements of international solidarity. A prolific writer he would dedicate a large part of his energy to defending the history of the Resistance (writing a monumental two-tome history entitled ‘National Resistance 1940-1945), always available to speak at meetings at schools etc. He was also present in demonstrations and protests. On March 2010, during one of the first mass rallies against austerity riot police sprayed him with tear gas with the Minister of Public Order being forced to condemn such practices. During the mass movement of the Squares he was also there speaking to crowds.

During the trial of Golden Dawn he was also there, reminding of the continuity of antifascist struggle.
However, just referring to Glezos’s political trajectory cannot explain the place he had in the collective thinking of many generations. Glezos was never just a ‘living symbol’. He was more like living history, history in the making, history in the present. One is really impressed to see how many people, of many different generations, actually had personal memories of meeting Glezos in one moment or the other.
It is as if he represented the continuity of a spirit of struggle, the red line of commitment, courage and sacrifice, from the Resistance and the Civil War to contemporary movements.
And whatever disagreements one might had with Glezos on one issue or the other, he was living proof of the ‘new humanity’ that the Communist movement had envisaged and projected: always committed but also open-minded, eager to experiment, insisting on the broadening of democracy, trying to avoid dogmatism and bureaucratic mentality. 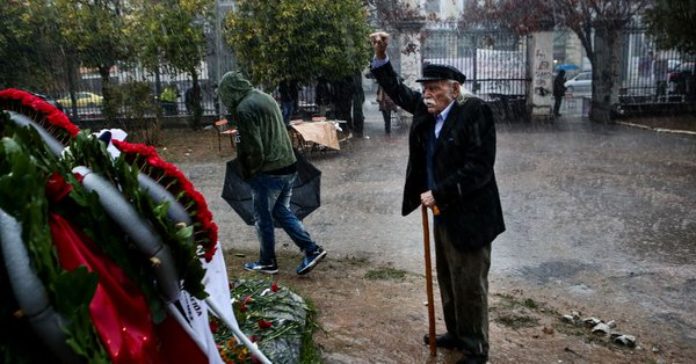 Manolis Glezos pays tribute to the dead of the 1973 Students’ Uprising at the Polytechnic University in downtown Athens.

It is not that he represented a particular line or program. He represented a spirit of struggle and resistance in a society that in the past ten years went from insurrection and hope to capitulation and defeat. A spirit of resistance and struggle most needed now.
Because of the restrictions imposed of the pandemic Glezos’s funeral will not be a mass demonstration as we would have wished. But tonight’s salute to the ‘last partisan’ made evident the place he has in our collective memory, feeling and thinking.