Fabian Figueiredo writes:  In recent weeks, Portugal has witnessed an escalation of extreme right-wing violence, the like of which has not been seen for a long time.

An anti-fascist community centre in Lisbon was invaded by neo-Nazis, the headquarters of SOS Racism was vandalized, a recently formed neo-Nazi group organized a KKK-style parade and several anti-racist activists and left-wing MPs, including Bloco de Esquerda MPs Beatriz Gomes Dias and Mariana Mortágua, were the target of threats.

A group of neo-Nazis, imitating racist criminal groups from the United States of America Ku Klux Klan, marched in front of the association’s headquarters in Lisbon, which will file a complaint with the prosecutor. They gathered in front of the headquarters with their faces covered with white masks, imitating the attacks of the Ku Klux Klan, which, in the United States, for many decades, have made racist attacks and even lynching of African American people. 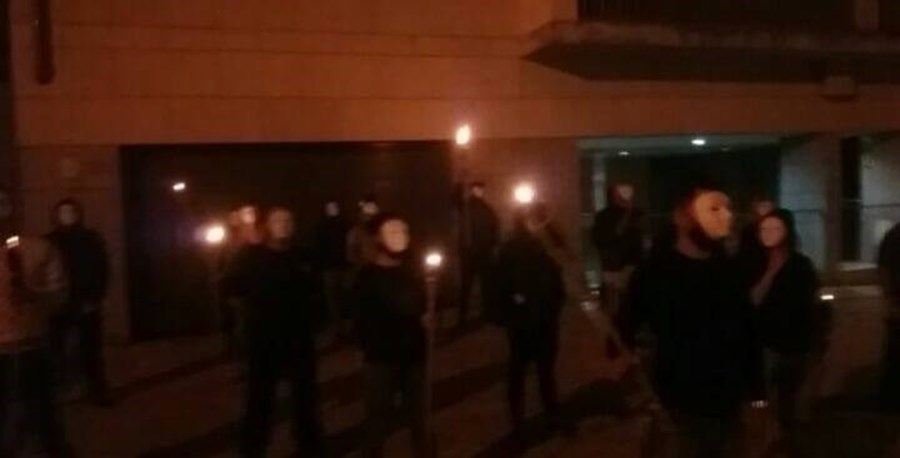 The daily newspaper Público recalls that, a few weeks ago, the headquarters of SOS Racism was vandalized with a painting with the phrase “War on the enemies of my land”. On the night of the 12th to the 13th of June, several graffiti with racist and xenophobic phrases appeared in several parts of Lisbon.

SOS Racism is adding what happened last Saturday (08/08/2020) to other threats that it has received and will complain to the Public Prosecutor for threats to physical integrity, moral offences and property damage and incitement to hatred and violence.

In a statement to the newspaper, SOS Racism leader Mamadou Ba says: “This is an escalation. It is one thing to hold a demonstration in the public space where they take a political stand against anti-racism, which is unacceptable in democracy, but to elect an anti-racist organization as a target to slaughter, make death threats and a military parade in Ku Klux Klan’s style goes of beyond all limits of ideological confrontation”.

The group that made the racist parade last Saturday took the initiative on a Facebook page with the name “National Resistance”.

A neo-Nazi group, the self-proclaimed “New Order of Avis – National Resistance”, sent an e-mail in which it threatened several anti-racist and anti-fascist activists and three female MPs.

“We inform you that a period of 48 hours has been allocated for the anti-fascist and anti-racist leaders included in this list, to terminate their political functions and leave Portuguese territory”, they threaten. And they add: “If the period has passed, measures will be taken against these leaders and their families, in order to guarantee the security of the Portuguese people”.

According to the Portuguese Diário de Notícias newspaper, the Criminal Police (Polícia Judiciária – PJ) has already received a report of the threats and has opened an investigation to investigate and identify the perpetrators of the threats.

Bloco de Esquerda informed the PJ that the MPs Mariana Mortágua and Beatriz Gomes Dias will individually file a complaint with the Public Prosecution.

Speaking to Público, MP Beatriz Gomes Dias states: “This form of intimidation is serious, it is a crime and must be treated as such. We want the investigation to proceed as quickly as possible and that the authors are identified and held responsible”.

SOS Racism leader Mamadou Ba, who gave statements to the PJ on Wednesday, told the newspaper: “This latest threat is proof that we need to take the level of escalation we are seeing very seriously. It means that they are not just threats from social networks and that they have to do with political dispute but with terrorism and direct death threats”.

This threat follows recent ones, the last of which was the “Ku Klux Klan parade”, which took place last Saturday (08/08/2020) outside the SOS Racismo headquarters.

The community centre “Disgraça”, in Lisbon, was attacked by three skinheads during the dawn on the 7th August. Last Friday night, the 7th, the Disgraça community centre, in Lisbon, reopened for the first time after the pandemic. The fact was public and was advertised on Facebook. After one o’clock in the morning, three elements, between 30 and 40 years old, in dark clothes, masks, shaved heads and tattoos, attacked the people present.

The attack took place hours after an email sent by a group that identified itself as “New Order of Avis – National Resistance” and that directly threatened a list of anti-fascists, giving them 48 hours to leave national territory or “measures will be taken against these leaders and their families, in order to guarantee the security of the Portuguese people ”. In addition, it was said that “the month of August will be the month of the nationalist rebirth” that “no longer tolerate the presence of Antifas terrorists on our streets”.

To the daily newspaper Público, some of the ten people present reported what happened. One of them says that they started by chasing two people who were going to enter the centre saying “‘they are anti-fascists, they are anti-fascists, now they will see what they are like’, something like that, but I couldn’t understand the exact words.”

Then they forced their way in, destroyed objects and threw a gas bottle down the stairs. They broke a window with a beer bottle and stole a fire extinguisher. After intimidation and damage, they fled by car. Disgraça defines itself as anti-authoritarian community centre. For this reason, they’ve become a target of the extreme right.