You are at:Home»Politics»Far Right»Christchurch, Islamophobia, and the rise of the far-right

A global alliance of neoliberals, racists, and the fascist far-right is capitalising on the upswing of discontent in the wake of the 2008 financial crash.

Another day, another attack. This time there can be no doubt: Friday’s brutal massacre by a white supremacist terrorist of 49 innocent Muslims congregating for peaceful prayer is yet another manifestation of modern-day fascism’s global surge.

In a sickening twist, the attacker video-recorded and live-streamed himself gunning down the congregation and pumping his bullets into the bodies of the dead, the injured, and those trying to crawl away to safety.

The footage was played live on his Facebook page; shared widely on alt-right platforms such as 8chan, and spread like wildfire across the rest of the internet. Today’s fascists are mobilising on the streets—but cyberspace is their richest recruiting ground, and is the key tool that has enabled them to so rapidly globalise their networks and share tactics and strategy.

This attack was not just an isolated incident. It must be seen in the wider context of rising Islamophobia, spurred on by the political establishment, the mainstream and tabloid media, and institutionalised state racism across the globe.

Directly before his murderous rampage in Christchurch, the attacker, a 28-year-old Australian man named Brenton Tarrant, published a 78-page manifesto in defence of his white supremacist ideology. The UK’s Daily Mail, notorious for its hate-filled, racially motivated headlines, immediately made the manifesto available online for download by its readership.

From Donald Trump’s ‘Muslim ban’ to Nigel Farage’s xenophobic Brexit campaign, Boris Johnson’s dehumanisation of Muslim women as ‘letterboxes’ to Matteo Salvini’s racist statement that ‘Islam has no place in the Italian constitution’ and that Italy must be ‘cleansed’ of migrants ‘street by street’, elected fascist politicians are fuelling the rise in anti-Muslim hatred.

In France, presidential candidate Marine Le Pen has stated that ‘Islam needs to be put back where there is no place for it’, and has compared Muslims praying peacefully in the streets to a ‘Nazi occupation’.

In India, Narendra Modi, formerly a full-time organiser for the known fascist organisation Rashtriya Swayamsevak Sangh, was elected prime minister in 2014 despite having presided, in 2002, over the bloodiest communal riots to occur in decades—when over 1000 people—mainly Muslim—were massacred in the state he was governing: Gujarat.

Under Modi, violence and lynchings of Muslims, as well as the assassination and intimidation of left-wing commentators and journalists, is now commonplace and generally occurs with relative impunity.

In China, vast swathes of the Muslim Uyghur population are being housed in concentration camps, euphemistically billed as ‘re-education camps’. In Burma, we have seen the state-sponsored genocide of the Muslim Rohingyas.

In Israel, Benjamin Netanyahu has recently announced on social media that ‘Israel is not a state of all its citizens’, later telling his cabinet that Israel is ‘the nation state… only of the Jewish people’—rhetorically de-legitimising the existence of Israel’s significant Muslim population.

Back in Britain, Muslims are already being treated as second-class citizens; indeed, in some instances, they are not even considered citizens at all. The UK Home Office’s treatment of the British-born Shamima Begum is a case in point.

Brainwashed by a radicalising ideology at the age of 15, she was induced to travel to Syria and ten days after her arrival, while still a child, she married Dutch-born convert Yago Riedijk.

While much can be said about how this young under-age girl was failed by the British state, the British state’s response to her requests to return are wholly unlawful and have set a precedent for the stripping of citizenship rights for British-born people without white skin; myself included.

Sajid Javid and the Tory Home Office’s actions send out the message that anyone whose parents or grandparents were not born in this country can now be made stateless at the whim of the British government. Indeed, even if your parents were born in this country, as Shamima Begum’s dead baby may testify from the grave, that does not qualify you for British citizenship.

Javid, of course, is trying to prove his mettle to the reactionary elements of the population who have ingested decades of anti-migrant and anti-Muslim propaganda. The Tory party, in its bid to stem the hemorrhaging of its electoral support to UKIP, has tacked to the far-right.

Javid, despite himself being of South Asian descent, has capitulated to Tommy (Stephen Yaxley-Lennon) Robinson’s rhetoric of racial hatred, singling out the race of the perpetrators of the Rotheram sex-gang scandal on social media as  ‘sick Asian paedophiles’—as if their race, not their criminality, was the most important factor.

What is really going on? Racism and Islamophobia have complex and deep historical roots. But this recent upsurge and conjuncture with the rise of fascism has occurred in a specific politico-economic context.

Yaxley-Lennon, alongside many other of the far-right, fascist parties, is funded by big business and backed by billionaires. Donald Trump, Steve Bannon, and the alt-right, racist news network Breitbart, are all financially supported by corporate sponsors—including former PayPal CEO Peter Thiel, and Robert Mercer, co-CEO of the $50 billion Renaissance Technologies hedge fund. The dark funding behind the Brexit campaign has also been exposed, and it too has been exposed as a neoliberal project of the disaster capitalists: from Arron Banks to Jacob Rees-Mogg.

It is clear that a global alliance of neoliberals, racists, and the fascist far-right has emerged, and they are capitalising on the upswing of discontent that has mushroomed in the wake of the 2008 financial crash—channelling it into hatred towards the ‘other’.

Failed austerity policies, stagnant wages, market liberalisation, the rollback of social security, the intentional refusal of neoliberal governments to invest in social housing, free healthcare, better education, and sustainable jobs, compounded by historic levels of inequality as wealth and profits are hoovered up by the 1%, has unleashed a torrent of rage and discontent.

However, instead of blaming these problems on themselves and the failed neoliberal orthodoxy they have implemented, politicians and media outlets, funded by big business, have scapegoated migrants. Bosses, bankers, and politicians are not to blame: Muslims, refugees, free movement, and people of colour are.

Take, for instance, the British tabloid newspaper The Sun. In an article headlined ‘SUN SAYS: We urge our readers to beLEAVE in Britain and vote to quit the EU on June 23’, the erroneous statement that ‘To remain means being powerless to cut mass immigration which keeps wages low and puts catastrophic pressure on our schools, hospitals, roads and housing stock’ was published.

This, of course, is an outright lie. Countless studies have shown that the British economy would be kneecapped without migration, particularly given the ageing population. Indeed research from the Oxford Migration Observatory shows that migration has boosted British workers’ wages and overall economic performance in the medium and long term.

The real reason why wages remain stagnant across the world is the structure of the economy and the weakness of the trade union movement. In Britain, migrant workers are poorly unionised (though incipient steps are being taken to reverse this). Worker ownership and co-operativisation is low. Profits are being hoovered up by CEOs and shareholders. Social democratic parties, instead of fulfilling their historic post-war redistributive role, have cut back taxation and given in to the austerity narrative.

This capitulation of social democrats parties to the neoliberal orthodoxy and racist, migrant-scapegoating rhetoric is particularly dangerous. In an article for the Guardian, Hilary Clinton, former Democrat presidential candidate, stated that her party had to be more harsh on immigration to win. Even the left-wing leader of the UK Labour Party, Jeremy Corbyn—usually an ardent and unequivocal defender of migrant and refugee rights—has repeated the claim about migrants depressing wages, stating in March 2018 that Brexit would prevent firms ‘importing cheap labour’ to undercut UK wages.

Len McCluskey, leader of Unite the Union and key backer of Jeremy Corbyn, has also capitulated to the rhetoric. He has urged that the Labour leadership must take concerns about immigration into account, and in a speech in 2016, stated, ‘we are also, I would argue, past the point where working people can be convinced that the free movement of labour has worked for them, their families, their industries, and their communities.’

This is a dangerous admission of defeat from a man whose career was built on the premise of fearlessly and unashamedly defending the working class—and that should, in theory, include the non-British born working class.

History shows us that appeasement never works. To defeat the far-right, left-wing parties and movements must unapologetically and unashamedly defend and protect the rights of refugees, migrants, and Muslims. They must quash the claims that it is migrants—not a rigged economic system—who undercut workers’ wages.

They must call out and fight back against the racism of Boris Johnson, Nigel Farage, Sajid Javid, and the migrant-scapegoating Leave campaign. Across the globe, they must reach out to Muslim and migrant communities, and put them at the forefront of a united working-class movement to transform the neoliberal capitalist system into a system based on social justice and workers’ co-operation.

As the attacks on the synagogue at Pittsburgh, the murder of the liberal Polish mayor of Gdansk, the brutal stabbing of Labour MP Jo Cox, and now the massacre at Christchurch show, the fascist far-right is out to get us all. We must unite and fight back.

Seema Syeda is a writer, editor, and socialist activist. She is co-author of ‘Creeping Fascism: what it is and how to fight it’, with Neil Faulkner, Phil Hearse, and Samir Dathi. Follow Seema on Twitter @seema_syeda. 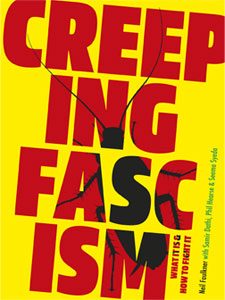 Creeping Fascism: What It Is And How To Fight IT
By Neil Faulkner with Samir Dathi, Phil Hearse and Seema Syeda.

The ﬁlm of the 1930s is re-running in slow motion. Fascism is rising again. A tide of nationalism, racism, and authoritarianism is sweeping the world. This book is an urgent call to arms. It argues that we face the clear and present danger of creeping fascism.