You are at:Home»Politics»Climate Change»A decade ago the banks crashed the economy; now they’re crashing the planet

From Cyclone Idai, which has killed hundreds in south-east Africa, to flooding in Bangladesh – where my family is from – for decades climate change has been devastating communities in the global south. More recently these effects have begun to be felt by people in the UK too: just last month, wildfires raged on Saddleworth Moor, while where I live in Brixton, the air is so polluted I suffer from breathing problems.

We all know that the impact of climate change is felt unequally, depending on where you live, how wealthy you are and how easily you can shield yourself from its effects. Less widely known, however, is that responsibility for the crisis is unequal too. In recent years we have been sold a lie: that ordinary people are to blame for the climate crisis. It’s our spending and our consumption habits that have created the mess we’re in, we are told, not the bankers, oil companies and a rich elite.

But there is another way. The truth is that the crises we face – economic, social and ecological – are the fault of an economic system that serves the few, not the majority. The rich have become richer, while austerity has hollowed out Britain, and the ecosystems sustaining life have been devastated.

At the pinnacle of this system stands the fossil fuel industry. A report last year showed that just 100 companies have been responsible for over 70% of the world’s carbon emissions since 1988. The fossil fuel industry has wrecked the planet, while enacting violence and devastation across the global south. They brought about this crisis, and they should be the ones to pay for it.

According to the Banking on Climate Change report, the worst offender in Europe is Barclays. Since the Paris agreement was signed at the end of 2015, Barclays has funded the fossil fuel industry to the tune of $85bn, from fracking and coal here in Britain to the Dakota Access pipeline in North America. In each case this funding has been integral to fossil fuel companies undertaking ecocidal projects, sometimes forcefully, against the wishes of local communities.

If we can pressure Barclays into stopping its fossil fuel finance, we will throw a spanner in the workings of a capitalist machine intent on extracting profit by any means, even at the expense of the planet. That’s why today, Momentum members around the country are launching a new campaign to bankrupt climate change and stop Barclays funding the fossil fuel industry. With over 40 creative direct actions planned at Barclays branches on the first day of the campaign alone, we will put huge political pressure on the bank to end its key role in financing climate chaos.

In doing so, we are drawing on a rich history of protest. In the 1980s British students campaigned for Barclays to withdraw from apartheid South Africa – and won. More recently French campaigners successfully pressured banks into stopping funding coal projects. And just last month, renters’ unions across the UK, including Acorn, forced NatWest to drop a policy discriminating against welfare claimants.

Our campaign can succeed too, especially in the context of an upsurge in climate activism. From the inspiring youth climate strikes, to the push for structural change by the Sunrise Movement in the US and Labour for a Green New Deal in the UK, people across the world are demanding not just the decarbonisation of our economies, but the transformation of the very basis of our societies too.

Ordinary people will no longer accept the many being punished for the crimes of the few who caused the climate crisis. Instead, we’re pointing the finger squarely at the oil barons, the fossil fuel executives, and the corporate elites – and demanding something better.

Seema Syeda is an author and Momentum activist. See also her recent article Christchurch, Islamophobia, and the rise of the far-right. On 2nd April 2019, she is speaking at a London public meeting titled Islamophobia, Brexit & Creeping Fascism. Details… 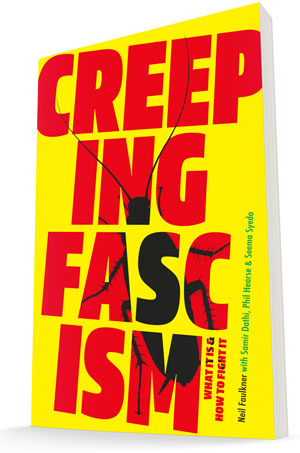 Seema Syeda is co-author of Creeping Fascism: what it is and how to fight it, published by Public Reading Rooms March 2019

How do we prevent the history of the 1930s repeating itself in the early 21st century? How do we break fascism, before it breaks us, and open the road to an alternative future and a world transformed?