You are at:Home»Writing»Jeff Goulding»Why the Labour Party under Jeremy Corbyn is no longer afraid of its own shadow

Standing in the ruins of a failed economic model, the question is not whether we can afford to implement Labour’s programme, but rather can we afford not to.

Labour have pledged to be even more radical in power than the Attlee government of the 1940s. In September 2016, on the banks of the Mersey, they laid down the policy foundations that could well deliver on that bold promise. In just one year, the new leadership had completely transformed the party’s outlook. This shift to a more radical set of proposals is as necessary today, as it was seventy years ago.

In 1943, with the war in Europe still raging and many of Britain’s cities in ruins, a debate raged in Parliament and beyond as to the future direction of social policy. ‘The Beveridge Report’ had been published a year earlier and it had identified the “five giant evils” that stood in the way of post war reconstruction: squalor, ignorance, want, idleness, and disease. It called for a revolution in social policy, no more tinkering around the edges.

The Conservatives, led by Churchill, sought to dampen down expectations and called upon the public not to make excessive demands on government. The country was crippled by debt, almost three times higher, as a percentage of GDP, than it is today. As a result the Tories proposed to limit the scope of change.

It would be left to Labour, who were swept into power in 1945, to implement the report in full, while the Conservatives voted against the introduction of the National Health Service. In the context of such devastation, sacrifice and economic ruin, Labour’s programme was arguably one of the greatest achievements in human history. It makes a mockery of today’s naysayers, who argue that we can’t afford to give every citizen a decent life.

In reality Britain could ill afford not to implement Beveridge’s recommendations at the end of the war. How would its streets and houses be rebuilt, or its factories put back to work, without a healthy and educated workforce, free from the squalor and disease previous generations had suffered.

It is a source of deep anger for me, that today all of these incredible social advances are being undone. Despite Britain being the sixth richest nation on the planet, those “five giant evils,” identified by Beveridge, are on their way back. The spectre of homelessness haunts our streets, while council houses lie empty. Child poverty is on the rise and people are relying on food banks to feed their families. Meanwhile the Tories distract the public with tales of refugees destroying our public services, while it is they who wield the wrecking ball.

John McDonnell has spoken of the sense of the optimism his family felt, in the sixties, as they moved into council housing and broke free of the slums. They had imagined they were entering a golden age of continuous social progress. Parents all across the land could expect that their children would go on to lead better lives than their own. Those men and women who had fought so hard during the war, had truly left the world a far better place than the one they had been born into.

Today though, parents who wave their children off to university, can only look on in horror as they rack up mountains of debt. Our transport infrastructure is crumbling and workers toil away on zero hours contracts, not knowing how much they’ll earn from one week to the next. Meanwhile the super rich avoid their taxes and hoard away the fruits of our labour.

Progress is being strangled and we are drifting back down the path of conflict and intolerance. Meanwhile, those in government move us ever closer to the type of nation our ancestors fought so hard to transform. It is nothing short of a counter-revolution and a betrayal of those who sacrificed so much for our future. Not since 1945 has Britain been in such need of an alternative vision. Thankfully we now have it, in the form of Labours new programme.

I have reflected a lot on the events of the 2016 Labour Party Conference. It was at times a truly inspirational gathering, both inside and outside the walls of the ‘Echo Arena’. Liverpool has long been the scene of mass gatherings. Our streets are accustomed to the pounding of feet, and the mighty Mersey has grown accustomed to demands for social justice and cries of power to the people. Nevertheless the sight of people, young and old, actively engaged in discussions about the type of society they want to create, is food for the soul.

The scale and scope of Labour’s ambition has taken even me by surprise and it has the potential to transform the lives of millions. Surely now the whole movement can unite behind it. Where Theresa May offers only a race to the bottom, Corbyn’s Labour offers education for all, for life. Not simply to create an army of workers, but to enlighten and unlock the people’s potential.

Labour now promises to end homelessness, child poverty and to restore the NHS to a publicly funded service free at the point of access. It is pledging a decent income for all and the reconstruction of our crumbling infrastructure. Of course the Tories will say we can’t afford it. Don’t they always though? Apparently we can afford tax evasion on an industrial scale and there is always a bottomless purse when it comes to war; but a decent society is too expensive, they say. It’s a lie and at last we have a leadership brave enough to say it.

No longer do we have a party afraid of its own shadow. No more hiding behind polling companies or pandering to the lowest common denominator. On immigration Labour is at last articulating a coherent strategy, that doesn’t accept the victimisation of minorities. No longer are we running scared of the right. Instead we are calling out the politicians and unscrupulous employers, who blame those they exploit for societies ills.

This is at last a vision that can unite a country and inspire this generation of voters to fight for it. Above all it is a manifesto in the making for a government in waiting. It is as bold as it is ambitious, as uplifting as it is comprehensive. Whisper it no more. This is socialism for the 21st Century.

As we stand once more in the ruins, not of war this time, but the result of a failed economic model, the question is not whether we can afford to implement Labour’s programme, but rather can we afford not to. 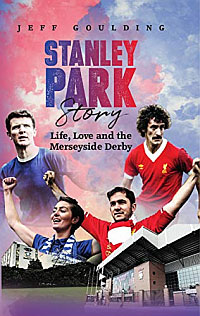 Review:
“A rich tapestry – yes for football fans – but also for anyone interested in how decades of social, political and cultural change and upheaval shaped Merseyside.”
– Read More…