You are at:Home»Politics»Brexit»Mass Action Can Stop the Brexit Coup

Hundreds of thousands of people took to the streets last Saturday to defend democracy – to stop Boris Johnson closing down Parliament and imposing a no-deal Brexit.

There were angry protests everywhere – from Bodmin to Orkney, from Swansea to St Albans. People in cities, towns, and villages – many of whom had never been on a demonstration before – came out against an illegitimate government. Across the country, the chant ‘Stop the Coup’ rang out.

In London, tens of thousands filled Whitehall, and thousands of young people went from there to take direct action – closing roads and bridges and marching on Buckingham Palace. They were outraged by Johnson’s attack on democracy, overwhelmingly against Brexit, solidly anti-racist and committed to free movement.

A new mass movement is being born.

Many of these protests were spontaneous. Many others were organised by campaign groups such as Another Europe is Possible. All credit to them!

The Labour leadership called on people to join the protests. Jeremy Corbyn spoke in Glasgow and Diane Abbott and John McDonnell in London. Many grassroots activists spoke alongside them, as well as Laura Parker from Momentum and the new general secretary of the UCU lecturers’ union, Jo Grady.

The suspension of Parliament is the latest stage in the right-wing takeover of the Tory Party and the Government that began with the Brexit referendum in 2016. The Leave campaign was pumped full of money by billionaire Aaron Banks. It used unlawful data targeting methods. It was fed by the lies of the Tory press. It was the opposite of democracy.

Anti-migrant xenophobia was the key to the victory of the Leave camp. And in the frenzy whipped up by the far right, MP Jo Cox was tragically murdered.

If we don’t defeat it, the suspension of Parliament will mean a calamitous hard Brexit, followed by a general election. In this, Johnson will posture as the politician who carried out the will of the people. He will advance an utterly reactionary programme based on being ‘tough’ on crime and fake spending promises.

The chickens of the 2016 referendum are coming home to roost. This was never simply about crashing out of the EU. It was always about the extreme right seizing control of the Tory Party and then the Government. They have done so.

Now they want to impose their ultra-right programme. They want to turn Britain into a deregulated, cheap labour, low-tax, outpost, with minimal workplace and environmental regulations. With no EU deal, Johnson will be forced to accept a trade deal imposed by the United States – with grave implications for the NHS. This will make Britain a vassal state. A cornucopia for ruthless billionaires, exporting cheap labour, operating as an off-shore tax haven.

There would be huge tax cuts for the rich, paid for by the working class. There would be soaring prices, stagnant or reduced wages, a collapsing health service and social care sector. Zero-hours contracts would be hugely expanded, with a reduction or abolition of the national minimum wage further down the line. Cue rampant racism and attacks on immigrants. Cue new attacks on trade unions and democratic rights. Cue British servility to American militarism world wide.

This is the hard Brexit that must be fought. It’s the only one on offer. So the Labour Party must fight for Remain. 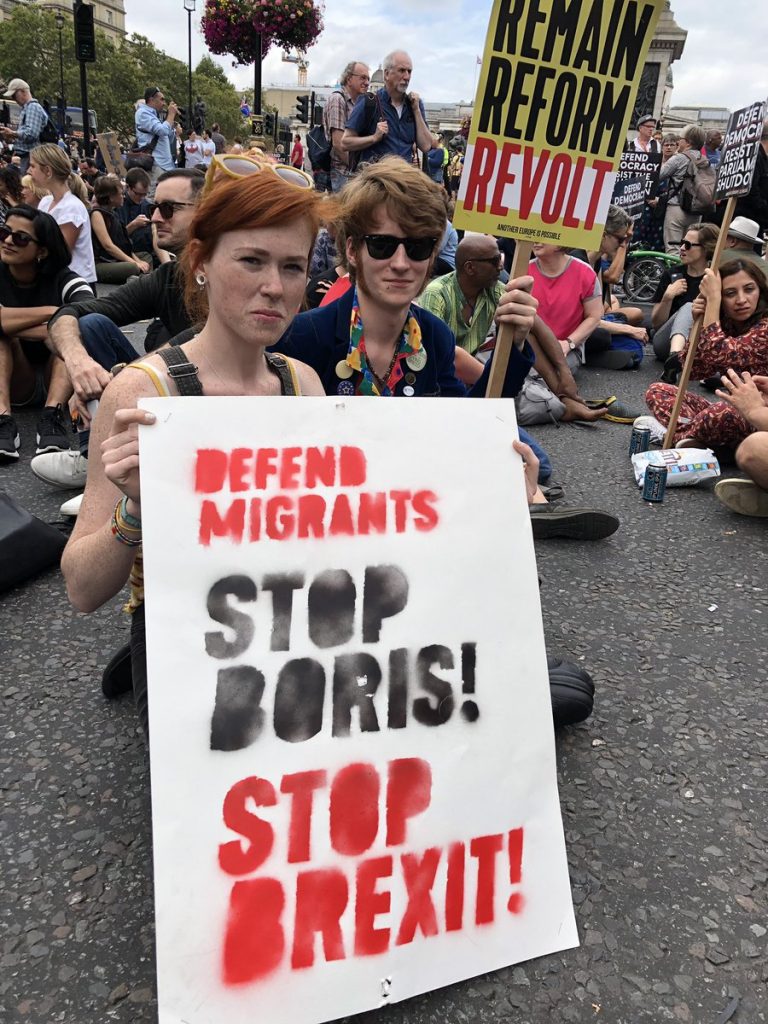 On Saturday, Extinction Rebellion activists occupying Manchester’s Deansgate spontaneously joined their actions with the anti-Brexit coup mobilisation. This is the kind of unity that is needed. We need to come together to fight and win.

There seems little chance that parliamentary action alone can stop the coup. Even with opposition parties united – a moot point – it needs Tory rebels to stand up to their leadership. In the past, all such rebellions have faded away. Johnson is threatening all Tory MPs who oppose his plans with immediate deselection. Tory MPs have few principles, but keeping their seat in Parliament is one.

Stopping the coup in Parliament would require a complex operation that could be derailed in the Lords. And even if Parliament succeeds in voting it down, the Johnson regime threatens to deepen its attack on democracy by ignoring it.

The present spontaneous mass action is showing the way. Now we need Labour and the trade union leaders to step up and play their part. They must call a national demonstration – a million-person (or more) march. Trade union leaders such as Dave Prentis from Unison, Len McCluskey from Unite, and TUC general secretary Frances O’Grady all recognise how calamitous Johnson’s plans are for workers and their families. The threats to union rights, to the NHS, and the threat of mass casualisation and large-scale unemployment are staring them in the face. They cannot step back from this fight.

Trade unionists must call for our unions to join together with Labour in preparing this national mobilisation, linking with the new movement that’s forming. The Labour and trade union movement has the strength to overturn the drive to dictatorship that the Johnson government represents.

Tory strategists will be reckoning that however this plays out, they can win a general election with a hard Brexit message, topped up with promises to build more prisons, lengthen sentences, exclude more unruly pupils, and spend more on the NHS.

The best way for Labour to prepare to win the election is to join with the mass mobilisation against the Brexit coup. The politics played out in the next few weeks will determine the future of Britain for years.

MPs can’t win the fight in Parliament without the mass action and civil disobedience we’re seeing across the country. We have to step it up on both fronts. This is a continuing struggle and we must link up with others across Europe and beyond who are facing the same attacks on democracy.

We must act, but we must also debate. We must decide strategy and tactics as we go forwards. This is the reason for this bulletin. It is an initiative of anti-Brexit internationalists on the Left. Please contact us with reports of actions in your area and ideas about the way forward. Contact us for further copies. Let’s work together to stop the coup, stop Brexit, and launch the fight for a better world.

Now is the time to act.