You are at:Home»Politics»Jeremy Corbyn»The life and work of infectious activist and inspiring writer Mike Marqusee. By Jeremy Corbyn

Losing a friend is always sad and tragic. Mike Marqusee has been suffering from a complex bone cancer for eight years and finally succumbed to it in St Joseph’s hospice in Hackney on Tuesday.

A fascinating and complex man, Mike was never afraid to deal with difficult questions, be they personal or political, or both.

He wrote frequently about cancer from the standpoint of his own experience and of total support and admiration for the NHS and the treatment he received.

Notably, he became irritated when people would tell him he was “brave,” in fighting cancer. He pithily put it in a Guardian article: “This is a front line, it is impossible to flee from.”

Mike as ever used his own experience to make the political point that as a naturalised British person born in the US he received excellent health treatment which in the US would have bankrupted him and his family, or left him with an xunpayable and ongoing debt.

He loathed and hated the free-market economics and immorality and hypocrisy of the US healthcare system. 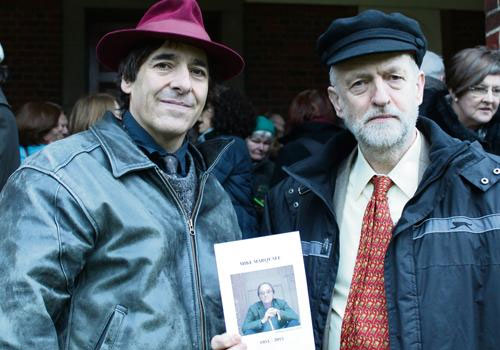 I first met Mike as a Labour Party member in Haringey when he was a youth worker in Holloway, north London. He was an inspiration to the disparate group of youth who enjoyed zany evenings with Mike at the former Highbury Roundhouse.

Indeed, only a month ago, as I was cycling home on a wet and cold night, a woman stopped me and asked how Mike was, because she had heard he was not well and went on to talk about the positive influence he had made on her life even though she gave him a hard time as a youth some 30 years ago.

He was a very effective member of the Labour Party, particularly in Islington North, and a great friend and support to me on many occasions. He couldn’t stomach new Labour, Blair and the wars in Afghanistan and Iraq.

He was politically active all of his life on the left, and never saw things through a sectarian prism.

His writings are what we have and they are amazing and prolific. His great work, jointly with Richard Heffernan, Defeats from the Jaws of Victory was a brilliant analysis of the 1992 election campaign and Labour’s constant retreat ideologically from the Tories.

Mike loved sport, poetry, politics and history, and had the rare ability to be a “sport nut” in his own words and at the same time be objective about the commercial interests and dishonesty of sport.

His love for cricket and India and Pakistan, partly because of their love for the game, enabled him to explore the colonial heritage of cricket in the great tradition of CLR James.

Mike’s Anyone But England, with its lovely subheading Cricket and the National Malaise, dealt in detail with not only the history of the game but also the class-ridden nature of the cricket establishment and the often dubious financing of so-called professional cricketers, in the way the game was supposedly an amateur sport.

Mike wrote an amazing book about Muhammad  Ali, titled Redemption Song, which he described as Ali in the spirit of the 1960s. In it he managed to weave together both Ali’s boxing career, the politics of the time, his victories, later his imprisonment and opposition to the Vietnam war and then an amazing comeback to become the all-American icon of the 1996 Atlanta Olympics.

He wrote many other books and one he was very proud of was Chimes of Freedom — about the politics of Bob Dylan’s art — in which he deftly wove together Dylan’s exploration and growth as a musician in the early 1960s with the civil rights movement in the US and including the killing of James Meredith, Martin Luther King and many others, and the inspiration that Dylan’s music gave to the anti-war movement. Mike also wrote in his deeply honest book If I Am Not For Myself about life growing up in the US as a young Jewish boy, his strong opposition to the Vietnam war, which had a big effect on him, and describing his anti-zionist Jewish attitudes — all a fascinating description of how his own politics were formed. Mike was a strong supporter of the rights and justice for all Palestinian people.

When he wrote he would become totally absorbed in the subject. His studies of William Blake for example have showed a depth and breadth of knowledge of English history, poetry and the mysticism Blake encompassed, and the huge political influence he’s had on the lives of many people.

He loved poetry deeply and wrote great poetry himself.

Mike should be respected for his selfless devotions to the cause of socialism and justice, his understanding of the power of culture and sport, and the way in which he illustrated how colonialism and racism has so brutally disfigured the lives of so many people.

In the few hours after his death, messages were already on social media — all over the world — from people who had been inspired by his work and his infectious activism.

Mike’s progressive family were an important influence on him. His partner and the love of his life lawyer Liz Davies, former chair of the Haldane Society of Socialist Lawyers, gave amazing support and inspiration to him, and our deepest sympathies must go to Liz.