You are at:Home»Politics»Far Right»The far right commands 22 million voters across Europe and it’s rising – what next?

The extreme far right now commands an electorate of over 22 million across Europe. From 1999 to 2014, the share of seats of extreme right-wing- and neofascist parties in the European Parliament has more than doubled from 11% to 23%, and they are projected to be the second largest bloc in the May 2019 elections.

Is Europe under threat from the biggest rise of the far right since the 1930s? On 2 March 2019, Walter Baier of Transform! Europe addressed the ¡No Pasaran! conference on the rise of far right extremism – named after the Spanish anti-fascist cry  of the 1930s ‘They shall not pass’. His sobering speech – reproduced below – makes a chilling read.

Throughout last year, the biotope of modernised, right-wing extremist parties in Europe has spread virally.

We are not speaking about violent, militant fringe groups but rather about parties who found their way to the command heights of states.

The experiences in Hungary, Poland, Austria and elsewhere make clear the antidemocratic character of these parties, which, once in government, infiltrate the state apparatus in order to take precautions against their being deprived of power again.

Should we use the term “Fascism” to label these parties, well-aware of the strong historical associations this term evokes?

You can also ask from the point-of-view of tactics, whether it makes sense to emphasise and give prominence to the objectively existing continuity between present-day right-wing extremist parties and historical Fascism.

What we have to consider, however, is that we must not look at historical Fascism exclusively with the knowledge of those born into a later generation, but we must also ask what contemporary theoreticians such as Arthur Rosenberg, Otto Bauer, Antonio Gramsci, Walter Benjamin, Friedrich Polock or Leo Trotsky had in front of their eyes when describing the rise of Fascism. 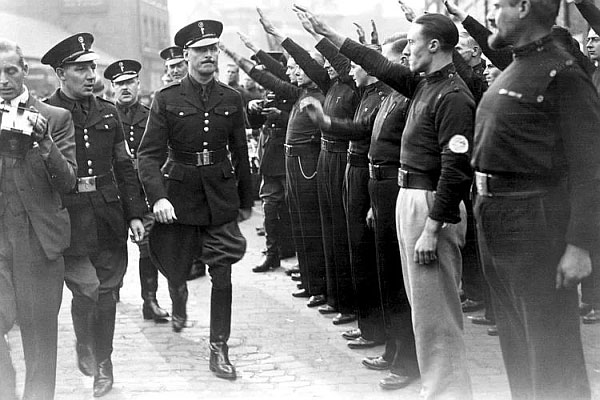 The phenomena they were analysing in a terrifying way resemble what the mainstream of empirical political science today calls “right-wing populism”.

Critical theoreticians such as Hannah Arendt and Karl Polyani agreed with the Communist Left on the point that Fascism was the political answer of one part of the bourgeois class to the crisis of liberal democracy.

Thus, Walter Benjamin wrote in 1936, “Fascism attempts to organize the newly created proletarian masses without affecting the property structure … Fascism sees its salvation in giving these masses not their right, but instead a chance to express themselves.”[1]

And Karl Polanyi adds, “Fascism, like socialism, was rooted in a market society that refused to function.“ And, he continues, “The fascist solution of the impasse reached by liberal capitalism can be described as a reform of market economy achieved at the price of the extirpation of all democratic institutions, both in the industrial and in the political realm.“[2]

However true it is that we cannot effectively fight modernised, right-wing radicalism with slogans, language and symbols of the Interwar period, it is equally true, on the other hand, that the radical, neofascist, populist or otherwise right-wing parties’ grab for power can only be understood in the context of capitalist property and dominance relations.

In this sense I would like to present for discussion the following five theses:

Right-Wing Extremist Parties and the State

Seven weeks after the elections that led to an absolute majority of PiS in the Polish Sejm, Die Zeit published an article headed “How a New State Is Emerging”, in which it said that “step by step the new government is rebuilding Poland into a right-wing nationalist state.”

Since then the PiS-government has done its best to meet the expectations, trying to get control over the decisive power positions in the state, for instance, by its effort get a grip on  the supreme court, which caused the European Commission to initiate infringement proceedings against Poland half way through last year. Meanwhile the government is trying to get under control as completely as possible public opinion by supervision of the media, censorship measures and politically motivated dismissals.

Similarly must be reported from Hungary, where FIDESZ in 2012, enacted a ‘Basic Law’, which starts with a national avowal to the ethnic-cultural nation of Hungary, thus defining the frame of legislation and administration, e.g., by distinguishing general human rights from civic rights, which remain the privilege of Hungarians inside and outside the boarders of the country.

In Austria, the Freedom Party (FPÖ), which is a nationalist party, however not faithful to its country but to a unified Great-Germany, is now in charge of the command over police, army and all secret services. While the FPÖ is creating a ‘deep state’ under their control, powers to overrule are established everywhere, from the National Statistics Institute to the Public Broadcasting Service.

In all these cases, there is no reason to presume innocence.

Wherever right-wing radical parties become members of governments, they act according to the principle: tolerate not more democracy than necessary but enforce as much authoritarianism as possible.

The Struggle for Interpretation in the Heart of Societies

Not merely theoretically, but also empirically, that is, on the basis of the politics pursued by right-wing radical/neofascist parties, it can be demonstrated that they are parties of the capitalist elites. Chasing them away from power requires mobilising the majorities in our societies for democracy.

This is the reason why it is important to see who the voters for neofascist parties are.

Mainstream political science answers the question by referring to the high votes for neofascist parties among the working class. The typical voter is portrayed as male, white, with low-income and level of education, typically at home in industrial regions on the decline, outside urban conglomerations.

From here, the road is short to considering Neofascism a phenomenon spreading only in the lower classes. This leads straight to the so-called “populism-thesis” according to which populists are dividing the population into “corrupt elites” and a “good, clean people”.

But populists address the people in a special way, namely through the medium of the reactionary prejudice or, as Adorno has shown in his study about the authoritarian character, through “antidemocratic resentment”, which is not contrary to the neoliberal world view but forms an inherent part of it.

This is the reason why the discursive cleavage in the political field between Right and Left continues to be important. This can be illustrated by data from the first ballot of the French Presidential Elections (2017) where the votes of blue- and white-collar workers were polarised between Marine Le Pen (39% resp. 30%) and Jean-Luc Mélenchon (24% resp. 25%)[3]. 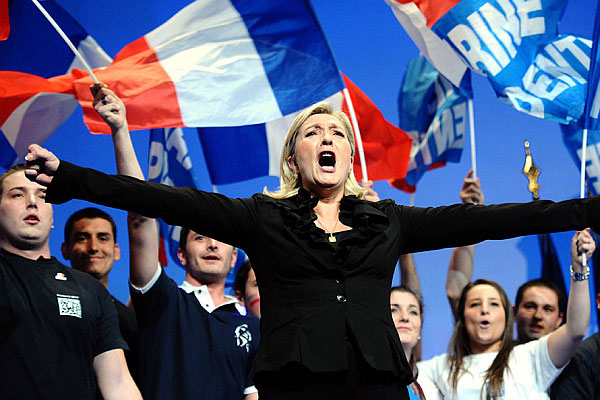 Contrary to the thesis upheld by main-stream political science that populism evades being assigned to either Left or Right, 70% of voters for Mélenchon identified themselves as “left”, while 63% of Le Pen voters called themselves “right” in post electoral surveys. This is even confirmed by the decisive motives the interviewees expressed, which were the classical topics of the Left such as social security, health care and an increase in mass purchasing power on the one hand, the topics of the Right such as the fight against terrorism, protection against crime and criminality on the other[4].

It is no longer possible to analyse the spreading of the extreme right-wing biotope in different countries as parallel phenomena that are independent of each other. It is a European phenomenon. From 1999 to 2014, the share of seats of extreme right-wing- and neofascist parties in the European Parliament has more than doubled from 11% to 23%.

According to the most recent projections, the extreme right-wing parties can expect 25% of seats in the upcoming elections in May, which would make them the second largest bloc.

This clearly shows that the kind of nationalism as embodied by the extreme right-wingers and neofascists has become an alternative, reactionary concept not only as the restructuring of states is concerned but also with regard to Europe as a whole.

In the incumbent European Parliament the extreme right-wing spectrum is split into three fractions. Of these, the most dynamic force of uniting the extreme right-wing parties is the fraction of the neofascist Right “Europe of Nations and Freedom” (ENF), embracing the Rassemblement National, the Freedom Party, the Northern League, the Congress of the New Right (Poland), the Czech SPD,  the Party for Freedom (PVV) and Vlaams Belang.

The Charta of the ENF contains in admirably frank and precise words the following,

“[T]he parties and the individual MEPs of the ENF Group base their political alliance on the sovereignty of states […] The opposition to any transfer of national sovereignty to supranational bodies and/or European Institutions is one of the fundamental principles uniting Members of the ENF […] They base their political alliance on the preservation of the identity of the citizens and nations of Europe […] The right to control and regulate immigration is thus a fundamental principle shared by the Members of the ENF Group.“[5]

The rejection of the EU in the name of “national sovereignty” and ‘immigration control’ is the common position of all these right-wing extremist parties.

It would be fatal for the Left to join in the game of nationalism, precisely because European integration finds itself in a crisis. A collapse of European integration – quite thinkable today – would be positive only if we thought that there was anything better to come, if we supposed that the great problems our societies are facing – such as globalised financial markets, migration, development, climate change, security – could be solved in a better way within a Europe of 28, 35 or 50 national currencies, nation states and border regimes.

However, if that is not the case, the consequence is to defend peaceful European integration against nationalism. But, no less important is to take into account that, accepting uncritically the status quo of the current EU and her politics, this cannot succeed but that it is necessary to fight for a radical social, ecological and democratic reformation of the EU.

To come back to the question: Is it possible to speak, in a scientific sense, of a fascist danger in Europe today?

My answer is ambivalent. Not long ago, a friend wrote to me on Facebook, saying “The light we can see in the tunnel only comes from the entrance behind our backs. It can disappear with the next curve. We need to be alert!”

This article also appears in the next edition of Transform Magazine.  To find out more about Transform! Europe: www.transform-network.net/