You are at:Home»Politics»Palestine»Israeli cartoonist sacked for his cartoon on “Israel’s shameful new Nationalism law”

There is no escaping the moral imperative now. Those who insist on supporting Israel must know that they are supporting an unabashed Apartheid regime.

The new Jewish Nation-state Law enshrines in law a racist doctrine of “separate and unequal”. The law states, Hebrew is the sole official language, the Jewish people have the exclusive right to national self-determination, and the “state views the development of Jewish settlement as a national value, and will act to encourage and promote its establishment and consolidation”.

Aida Touma-Sliman, Palestinian member of Israel’s parliament says, “This law, which fails to mention the words “democracy” or “equality” even once, constitutionally codifies Jewish supremacy and tells Palestinians like me: you’re not welcome here.”

In reponse to the law, the legenday Israel cartoonist, Avi Katz, published “My cartoon on Israel’s shameful new Nationalism Law”, parodying the selfie (see below) taken by Netanyahu and parliamentary supporters celebrating the enshrining in law that Israel is effectively an apartheid state. 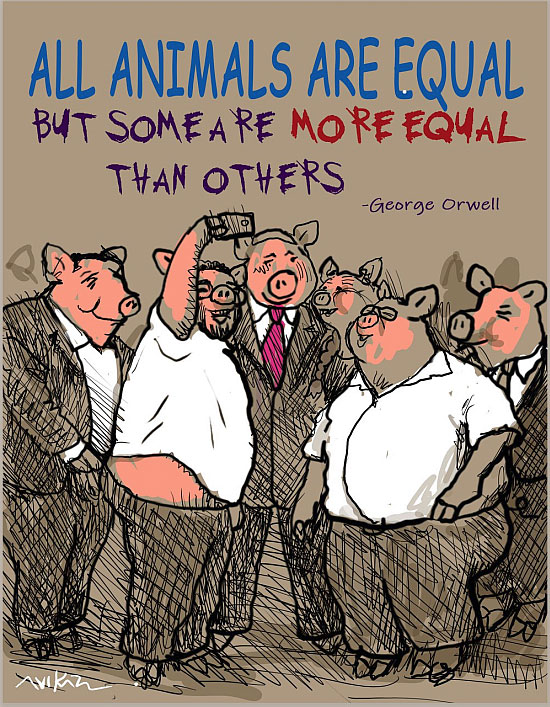 A veteran Israeli cartoonist was cut loose on Tuesday from the magazine he worked at for nearly three decades over an illustration portraying Prime Minister Benjamin Netanyahu and Likud lawmakers as pigs from George Orwell’s “Animal Farm.”

The cartoon by Avi Katz drew on a photo of Netanyahu and members of his Likud party snapping a selfie at the Knesset following the passage of the so-called Jewish State law last week.

The legislation, which defines Israel as the nation-state of the Jewish people, has had a mixed reception, with some critics decrying it as discriminatory toward the country’s non-Jewish citizens.

Alluding to the law, Katz’s drawing — in which all the figures have the heads of pigs — includes Orwell’s quote “All animals are equal, but some are more equal than others.”

“Animal Farm,” which tells the story of a revolt by animals on a farm against their human owners and its aftermath, is seen as an allegory for the Soviet Union following the communist revolution and the totalitarianism that accompanied Joseph Stalin’s subsequent rise to power.

The publication of the cartoon on Tuesday in the Jerusalem Report, a biweekly magazine published by the Jerusalem Post, was met with praise by some and anger by other social media users, with many objecting to his portrayal of the Likud politicians as pigs, which are perceived as among the most ritually impure animals in Judaism. 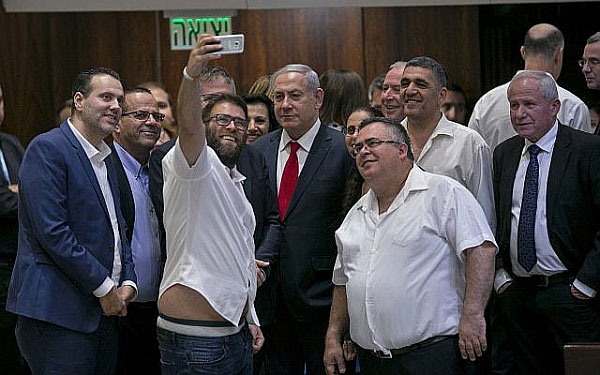 Following the uproar, the Jerusalem Post announced it would no longer work with Katz.

“Avi Katz is a cartoonist who worked as a freelancer at the Jerusalem Post and in accordance with editorial considerations, it was decided not to continue the relationship with him,” it said in a Hebrew-language statement.

Katz did not immediately comment. He had worked for the Jerusalem Report since 1990.

After he was fired, the Animix festival launched a fundraising drive to raise money to employ Katz until he lands another job.

Animix said in a Facebook post that while it found the cartoon “shocking,” the drawing does not go against the principle of freedom of expression and contains only contains “matter-of-fact” criticism of the government.