You are at:Home»Robin Beste Tributes»His loves stretched from Doris Day to Frank Sinatra to Rai, Lowkey and the Young’uns and beyond – by Andrew Burgin

Robin passed away on the 29th May at the Royal Free Hospital surrounded by his family. He’d had a heart attack the week before in the street close to his home while out on a walk with his wife Manuela. She said he was reciting a passage from the Tempest at the time.

The heart attack was a shock to us all because Robin, although in his seventies, was one of the healthiest people that we knew. We thought that he would live forever such was his spirit and engagement with the world.

I first met Robin in the early years of Stop the War Coalition. He was running Muswell Hill STW one of the largest groups with several hundred members and a mailing list of thousands. For many years his group ran a weekly stall on the Broadway. In 2005 STW put out a call for help with the International Peace Conference that we were organising in London. We had scores of international delegates that needed hosting. Robin immediately responded offering help from his group. The entire US delegation some thirty strong were looked after by Muswell Hill STW.

The following year he took over running the central STW office organising the massive demonstrations that took place in the wake of the war on Lebanon in 2006.

He was hugely talented and efficient and for many years ran the STW website almost single handedly. He admired good writing and sought it out promoting those those he considered the best writers. For STW and subsequently on his own Public Reading Rooms website these included STW Convenor Lindsey German and others such as Matt Carr, Jonathan Cook, Tansy Hoskins, John Wight, Caitlin Johnstone and the late great Heathcote Williams among many others.

It was his love of Heathcote both as a person and a writer that led to our closest work together. Heathcote had written a series of pieces on Boris Johnson whom Heathcote hated with a vengeance. Heathcote wanted the articles published as a book and as he said – a weapon. He approached Robin and myself with this as a plan. We agreed and set up a publishing house, the Public Reading Rooms, to launch the book. At the same time Robin set up a PRR website to promote the book and also to be a voice for a shared politics and future publishing. The book was published as Brexit Boris from Mayor to Nightmare and was illustrated with cartoons featuring Boris Johnson from the leading cartoonists of the day. The two printings of the book have sold out.

Over the last four years Robin continued to develop the website and build the publishing continuing to promote the writers that he admired. He was an editorial board member of the radical left journal Transform and he was central to building the successful European conference that the journal organised this March against the rise of the far right.

Robin never wavered in his support for the work of STW remaining a member of its steering committee until his death. Robin was a strong supporter of the Palestinian struggle and he was on the National Demonstration for Palestine only a couple of weeks before he died. 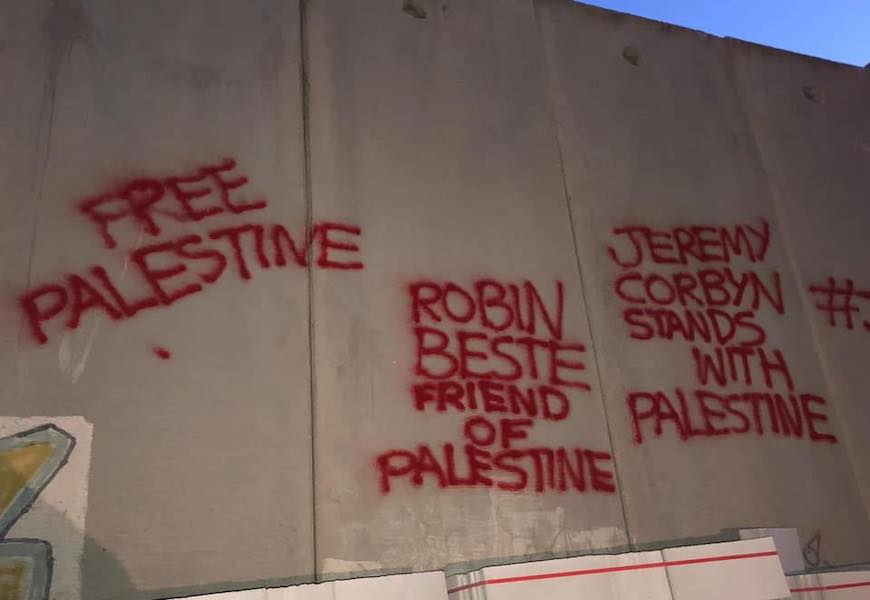 He was also very concerned at the lack of support from the left, as he saw it, for the case of Julian Assange whom he felt had been abandoned.

Robin had been a long time member of the Socialist Workers Party in the 1970s and early eighties and he retained an affection for comrades from that period and for the work of the organisation particularly its anti-racist and anti-fascist organising. However like many who’d been involved with the far left, myself included, he was drawn back into political life through the anti-war movement.

When Jeremy Corbyn became Labour leader Robin joined the Labour Party to support him. He saw Jeremy’s election as opening up a real possibility for social change. He and Manuela canvassed energetically for the Labour Party in the 2015 general election. In the great Brexit debate he plumped for Remain but he was opposed to the right wing in the Labour Party using the Brexit question to attack Jeremy’s leadership. He was very critical of me when I went on the two People’s Vote marches and in the usual Robin very straightforward way demanded that I explain myself.

Robin would have been absolutely furious about his own death. He was extraordinarily careful in guarding against that great thief. He said he hadn’t had a drink in forty years and was very proud of his specialised juicer and swore by the medicinal properties of ginger and according to Manuela had recently discovered the benefits of magnesium. For those of his friends who like myself who were/are in relatively poor health he had lots of advice. During my chemotherapy treatments he provided an endless supply of films and books to help me pass the recovery time.

His great love of culture is reflected in the many posts he made on the Public Reading Rooms website. The breadth of his knowledge of plays, films and music was vast and his loves stretched from Doris Day to Frank Sinatra to Rai, Lowkey and the Young’uns and beyond. He loved his family above all else and he made the teasing of Manuela into an art form. He was immensely proud of all his children. The last song I heard Robin sing was ‘the wheels of the bus go round and round’ which he performed live with his 2 year old grandson in his sitting room. Great fun.

I shall miss Robin terribly and miss our long telephone conversations which we considered to be serious political analysis but were really time well spent endlessly gossiping about the left and its foibles. I shall also regret the fact that I never asked Robin for any of the passwords or log-ons for our website and social media and you tube platforms which may now be locked for eternity. Robin was meticulous in protecting against any possibility of us being hacked. He succeeded. RIP.