You are at:Home»Recent»Foot Work – What your shoes are doing to the world

TRANSFORM interviews Tansy Hoskins about her new book: Foot Work – What Your Shoes Are Doing To The World. In Foot Work, you discuss the detrimental effects of the footwear industry on society and our planet. What would you say is the biggest issue in the book?

The working title for the book was Foot Work – What Your Shoes Tell You About Globalisation. I wanted to write it because I am interested in the way certain objects tell us a bigger story – in this case shoes perfectly tell us the story of globalisation and out-of-control corporate power.

Globalisation has meant a dramatic shift in where our shoes are made, how much people are paid to make them, and the ability of corporations to circumvent environmental protections. With production so cheap, 66.3 million pairs were churned out every single day in 2018. This is having a devastating impact on people, on animals, and on the planet.

I hope that a key take-home from Foot Work is that unchecked corporate power is trashing our planet and enslaving millions of people while the rest of us are sold a tale that everything is fine because there are shops full of nice sparkly consumable objects that we should aspire to own. Under capitalism, shoes have been reduced to being a shiny excuse for exploitation and profiteering.

In Foot Work I’ve tried to explain that you don’t need to know everything or have all the answers to want to change things: ‘There are a lot of big questions about capitalism, but the simplest ones hold the key. Is it worth destroying the rainforest to make trainers? Is it right that factories churn out 24.2 billion pairs of shoes a year, yet wealth is distributed so unequally that tens of thousands of kids get sick walking barefoot to school? Should people tanning leather have a life expectancy of fifty? If in our hearts we know the answer to these questions is no, then we have to ask ourselves what we are doing in a system where the answer is yes.’

What are standards, wages and factory conditions like in the shoe industry?

It is a mixed bag, but corporations systematically target different countries in the Global South to find the most amenable conditions with the lowest wages and restrictions.

I’ve written a lot about the fashion industry but when I started looking into the shoe industry it became clear that footwear is lagging far behind the rest of fashion in terms of standards and workers’ rights.

China is still the world’s number one footwear giant. I don’t think people quite get the scale of production in some of the industrial sites in China. There is a Taiwanese company called Yue Yuen which has 400,000 global employees – it is the biggest sports shoe manufacturer on the planet. When a strike took place at Yue Yuen’s facility in 2014, 40,000 workers walked out!

Another interesting, but far smaller, place to look at for shoe production is Eastern Europe. Often wages and conditions can be worse in Eastern Europe than in China – and these are shoes being made specifically for export to the rest of Europe.

A Macedonian factory I went to in 2018 was paying its workers, most of whom were women, 200-350 Euros a month. The shoes they were working on cost more than they would earn in a week so it was really depressing stuff. I have been thinking about the factories I researched in Eastern Europe a lot recently – one of them had just two toilets for fifty-six people. With those conditions how do you keep yourself and your work station hygienically clean during a pandemic?

It is also vital to remember the millions of people who make shoes but who aren’t in the recognised factory system. Homeworkers are a key reason why the shoes on our feet remain so cheap. They are the hidden pillar of globalisation. Conditions when production drops out of the formal system are even worse – a family of 4 homeworkers in Pakistan can earn 800 rupees per day, which is about £8. Then there are the basements of Syrian refugee children stitching shoes in Turkey. That was an upsetting part of the book to write, these children face all kinds of dangers and abuses and then the shoes they make are exported across borders which are closed to Syrian children. 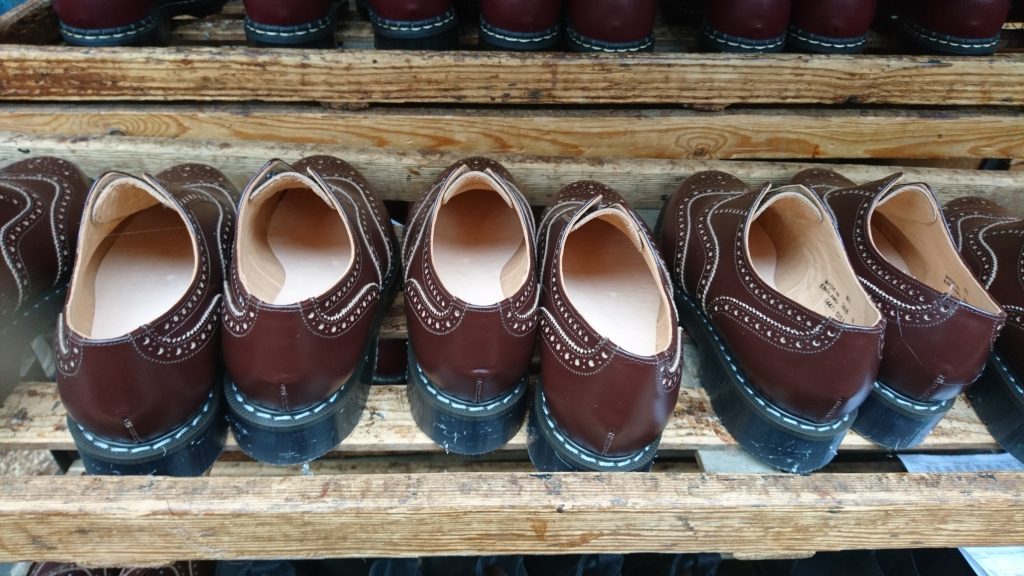 We live in a consumerist society, what should we do to change our relationship with the ‘things’ in our lives?

This is a difficult one because navigating modern society means being bombarded with messages that tell us we are being judged on what we wear, eat and drive. Thousands of adverts link consumption to our social status and tell us to be insecure about what we have.

Unfortunately this is a pressure that now starts very young and so we see children (as well as adults) desperate to own and wear a certain brand and type of shoe because their peer group considers other types of shoe to be a stigmatised product.

We certainly need to re-orient society away from valuing and stigmatising people based on their appearance and what they wear. This is a huge challenge because all the messages that tell us we aren’t good enough are designed to make us shop so ultimately we need to unpick capitalism and create a fairer world that values people not objects.

At the same time, people in much of Europe have lost their links with production as they no longer have friends or family working to make objects like shoes; this has allowed items in shop windows to become mysterious. This isn’t helped by the fact that shoe brands spend billions of advertising dollars obscuring supply chains and trying to make us believe shoes spring from puffs of pink smoke at the snap of a fairy godmother’s fingers.

The result is that capitalism has made us really alienated – from each other, from nature, from the true cost of the things around us. The best way to overcome this alienation is to work collectively to change the system.

Changing the world is definitely not an easy task. In Foot Work I worked on a tool called the Triangle of Change which contains three issues: individual, political and systemic. Individual change is placed at the top of the Triangle – because shoes are a consumer item, emphasis is often placed on changing ourselves, rather than the world around us. Individual change is not invalid, but it can function as a trap. The trap is thinking that as long as the top of the triangle is fixed, everything will be fixed.

The second level is political change, and it is here that questions of power begin to be examined. This level covers regulation, legislation, freedom of association and taxation, all elements that involve placing political pressure on governments and institutions and pushing them to regulate capitalism. By its very nature it is collective and covers a far greater number of factories and countries.

The third level is by far the biggest and is often the unspoken elephant in the room. This is quite literally the basis of the problem. It is here we find the most intransigent problems of capitalism: the systemic exploitation of women, the exploitation of the Global South, the creation and maintenance of racism and the imposition and exploitation of class and poverty. This third level means confronting capitalism and moving towards system change.

That is what I like about shoes – they carry us around but they also hold a lot of answers if we’re willing to listen.

Plus your local book shop!

‘Fascinating and eye-opening, FOOT WORK shows brilliantly how a simple everyday object can shed light on the hidden costs of globalisation and environmental degradation.’ Owen Jones

‘Tansy is one of the sharpest and committed analysts of the true cost of the stuff we own. FOOT WORK is an absorbing, meticulous and at times completely horrifying account of the shoes on our feet and how that supply chain is marching (all puns intended) us towards an even more dystopian future, especially for the workers in the system. Read this and you will make better decisions about all fashion, and all consumer goods in the future.’ Lucy Siegle