You are at:Home»Politics»Why history matters: if we understand how the past was forged, we arm ourselves to change the future

A Radical History of the World is a contribution to the ideas that we need if we are to achieve a world of equality, democracy, peace, and sustainability.

2018 concludes the centenary of the First World War. In Britain, at least, the commemorations have been dominated by ‘revisionist’ perspectives. Jeremy Paxman headed up the flagship BBC TV documentary in 2014 to repeat the old lie that it had been a war for democracy against German militarism. Former Prime Minister David Cameron claimed that same year that it had been fought ‘in defence of British values’. Right-wing historians have invited us to regard the slaughter on the Somme as ‘a necessary sacrifice’ and attempted to rehabilitate Western Front generals like Douglas Haig.

Equally pernicious is the almost total invisibility of the revolution that ended the war. Another flagship BBC TV documentary, broadcast in October 2017 to mark the centenary of the Russian Revolution, rehashed another old lie: that the whole thing was a conspiratorial coup designed to establish a dictatorship. Again, dominated by ‘revisionist’ commentators, the audience was treated to a succession of fake facts laced with right-wing vitriol. No-one watching would have guessed that the October Insurrection represented a mass popular revolt from below that trigged a global revolutionary wave that not only ended the First World War, but almost ended the world capitalist system that had given rise to it.

That revolutionary wave had ebbed away by 1923. The Russian Revolution – left isolated, besieged, impoverished – eventually succumbed to Stalinist counter-revolution. The last vestiges of the great mass movement of 1917 were destroyed in the winter of 1927/8. This re-set the European stage for a second great upsurge of imperialism, nationalism, and war. This time, between 1939 and 1945, some sixty million died. The great German revolutionary, Rosa Luxemburg, who was murdered by right-wing paramilitaries in 1919, had said that humanity faced a choice between socialism and barbarism. She was right: the defeat of the world revolution in the early 1920s was followed by the barbarism of Stalingrad, Auschwitz, and Hiroshima.

Are we heading towards another such cataclysm today? In the context of the 2008 Crash and the advent of the Age of Austerity, a wave of nationalism, racism, and fascism seems to be sweeping across the world. It is as if we are watching the film of the 1930s re-running in slow motion. A kind of creeping fascism is represented by Trump, Brexit, and a host of far-right politicians across Europe – Le Pen in France, Weidel in Germany, Salvini in Italy, Wilders in Holland, Orban in Hungary, and many others. Mainstream conservatives are mimicking the fascists, ramping up racist attacks on Muslims and migrants, while liberals and social-democrats at best say nothing, at worst echo the ‘strong borders’ rhetoric of the right.

We learn grim lessons from history about nationalism, racism, and fascism. We learn that ignoring it, let alone capitulating to it, puts you on the road to war and genocide. That is why history matters so much. That is why right-wing ‘revisionism’ – the neutering of criticism of the system – the burying of popular struggles for radical change – the distortion of history in the interests of wealth and power – has to be fought with a different kind of history: one that foregrounds the mass activity of ordinary people and shows our capacity to change the world.

Nation-states and nationalism are rooted in the bourgeois revolutions of the 16th to 19th centuries, above all in the French Revolution of 1789-94. But other ideas were forged in the same crucible – ideas about social equality and political democracy. And since the first emergence of mass working-class movements in the early 19th century, those ideas have been underpinned by social forces capable of realising them. For almost two centuries, working people across the world have engaged in mass struggle against the elites with ‘equality’ and ‘democracy’ inscribed on their banners.

Because of this – the threat of socialist revolution from below – nationalism has become something more than an expression of the interests of national elites: it has become an ideological device for dividing working people and discouraging them from uniting against the rich and powerful. Since the French Revolution, and especially since the emergence of the working class as an organised force – organised in trade unions and socialist parties – the elites and the masses have been represented by two sharply contrasting sets of political ideas. The Right has promoted nationalism, racism, militarism, and authoritarianism, the Left internationalism, peace, and equality. It is no exaggeration to talk in terms of a 200-year ‘war on democracy’ – a war of global elites against people power.

In periods of crisis – periods of economic stagnation and social decay following major financial crashes like those of 1873, 1929, and 2008 – this deep ideological fracture-line, reflecting underlying class antagonisms, is liable to become toxic. The long depression of 1873 to 1896 was ended by imperialism, an arms race, and finally the carnage of the First World War. The Great Depression of 1929 to 1939 culminated in fascism, war, and genocide. We appear to have entered another period of protracted capitalist crisis with similar potential. With great pools of despair and bitterness festering at the base of society, the right is again holding aloft its national banners, banging its war drums, and spitting bile at vulnerable minorities.

History, in this context, is not a form of entertainment. We do not study history simply as a pastime, because we are curious, because we are awed by the spectacle and the drama. We study history to learn from the past, to guide action in the present, and to change the future. For the future is not predetermined. Everything in history is contingent: alternative outcomes are possible, and what happens depends on what we do. We make our own history, albeit in the circumstances in which we find ourselves; we are subject to numerous constraints, but we always have options. So it was in 1914 and again in 1933. If the European socialist parties and trade unions had acted on their countless peace resolutions and called for mass resistance to war – for workers to strike, soldiers to refuse to answer the call-up, activists to block the railway lines, and so on – the carnage might have been prevented. If the socialist and communist leaders of the German working class had done something similar to stop fascism in 1933, Hitler might never have come to power.

We have to learn from the history of both successful struggle from below – the Russian Revolution, the great unionisation battles, the Civil Rights Movement, the campaign against the Vietnam War, the struggle of women for equality, and so many more – but we also have to learn from the defeats. We need to learn from history both how to fight and how not to fight, who to trust and who not to trust.

I am an academic archaeologist and historian, so my Radical History of the World is a serious attempt to understand how history works and how our world has been formed and re-formed by thousands of years of economic development and social struggle. But I am also an activist, and that is more important.

I know that we are at one of history’s great crossroads, and that one direction leads to nationalism, racism, fascism, and war, while the other involves mass struggle from below by hundreds of millions of people, organised democratically, acting collectively, armed with a vision of the world transformed. The new book is intended as a tiny contribution to supplying the ideas – the understanding of history – that we need if we are to achieve a world of equality, democracy, peace, and sustainability. 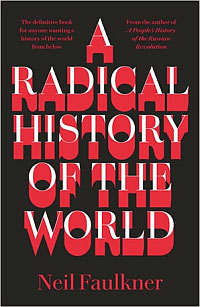 A Radical History of the World is available from Pluto Press.

Neil Faulkner is a leading historian and archaeologist. He is the author of numerous books. His new and updated version of Creeping Fascism: Brexit, Trump, and the Rise of the Far-Right will be published by Public Reading Rooms in early 2019.