You are at:Home»Politics»Brexit»Trump, Brexit and Tory Mayhem: is this a crucial turning point in British politics?

These are dangerous times, but the anti-Trump protests showed the potential power of those who champion social equality and inclusion, women’s rights and anti-racism.

The events of the past 10 days have spectacularly revealed key faultlines in British and world politics. In particular they have highlighted the acute crisis of the May government, the real motivations behind the antics of the hard right of the Tory party, the nature of the ‘America first’ strategy of Trump, the craven anti-working class politics of the Labour right and the immense potential reserves of the Left and progressive opinion in Britain.

We are at a crucial political turning point. Theresa May will certainly not survive and it is an open question whether the Tory government will survive.

Behind the mayhem lurks an astonishing fact: in the United States, around Donald Trump, a nationalist hard right has emerged, using its mass base to escape the immediate control and sanction of big business interests; and in Britain the nationalist hard right of the Tory party is similarly prepared to defy the immediate interests of big business to seize the leadership of the Tory party.

The resignations of cabinet ministers David Davis and Boris Johnson brought about something utterly predictable. The ultra-nationalist right wing of the Tory party will not accept anything other than a ‘hard’ Brexit. Their aim is to make a bonfire of EU labour and environmental regulations, already weak and difficult to enforce, while pushing the whole of British politics further to the right. In a parliamentary exchange last year, a laughing David Davis was happy to confirm to madcap Tory Brexiteer Peter Bone that while all EU regulations would immediately pass into UK law on the day of Brexit, the day after that parliament could repeal them all.

Beyond a hard Brexit, however, the Tory right is aiming for a harshly anti-working class, anti-immigrant, anti-welfare state and anti-multicultural government, a hugely dangerous prospect.

Of course the Tory right is pro-capitalist. But that does not mean that it is prepared to kowtow to leading companies and business people who fear Brexit will harm business interests. As Boris Johnson says, “fuck business”. Many times in history we have seen extreme right-wing forces willing to break with the immediate interests of capital to secure longer-term nationalist goals.

Theresa May’s Chequers Brexit compromise did nothing to safeguard working class interest, but attempted to position Britain ‘close to’ the single market and make some limited concessions to the EU on immigration and the rights of EU citizens here. All this is too much for the Tory hard right. Boris Johnson and Jacob Rees-Mogg are doing what they planned to do all along – cry ‘betrayal’ at anything less than crashing out of the EU with no deal. The cry of ‘betrayal’, promoted by the Sun, Telegraph and Daily Mail, is also the battle-cry of UKIP, whose support in opinion polls is now climbing quickly, up 5 points in the last week alone. It will also be supported by the fascist and semi-fascist right wing organised in the ‘Free Tommy Robinson’ demonstrations.

Theresa May’s plans face another obstacle – in their present form at least they will not be acceptable to the EU itself. It would be fatal for the European Union to allow countries to leave the union and maintain crucial advantages of membership without the main obligations. This is why Theresa May is in such a dire position.

While the Labour leadership will not lend a helping hand to prevent her defeat in parliament, some people in the PLP have other ideas. MPs Ian Austin and Mike Gapes have suggested that Labour work with May ‘in the national interest’, while Tom Watson amazingly says that it is not Labour’s job to bring down the Tory government. Some Blairite MPs may harbour dreams of a National Government, but it would split the Labour Party and finish the Labour right for generations to come.

However, in the event of a split in the Tory party, the emergence of a new centre party with the Lib Dems and some sections of the Labour right should not be excluded.

The mobilisations in London and around the country against Donald Trump were extraordinary, involving hundreds of thousands. The women’s demonstration alone numbered over 20,000, with more than 250,000 on the Together against Trump demonstration in London, while women and young people were heavily represented in all the protests. These demonstrations were the largest since the Iraq war protests of the early noughties.

Most of the anti-Trump actions were on a weekday, and as Len McCluskey told the crowd in Trafalgar Square “you represent millions who couldn’t be here”. This turnout represents the Other Britain, based in the Labour Party and the Left, in the trade unions, in the peace and women’s movements, and above all among young people. Probably an overwhelming majority of people who demonstrated voted against Brexit. And this broad current in British society is fiercely anti-racist and committed to multiculturalism. While it’s true this situation is in sharp contrast to some other European countries where xenophobic Islamophobia is near-dominant, this broad Left in British society will come under heavy attack in the next period.

Donald Trump’s evident racism and sexism, and the apparent crudity of his speech and manners, make it easy to over-personalise the opposition to his politics. But if Donald Trump dropped dead tomorrow, his place would be taken by Vice-President Mike Pence, just as fiercely right wing, nationalist, xenophobic and misogynistic. Trump represents a current in American politics which is huge, and which he is building by weekly mass rallies nationwide.

The Trump visit to Europe, and Britain in particular, shows he and his advisors have broken with key planks of US foreign policy that has lasted for nearly 70 years – support for NATO, European integration and managed trade. In particular Trump’s xenophobic nationalism is sending him on a mission to crush the EU as a political and economic bloc that can defy American dominance. Several weeks ago, Trump told French president Macron that France should leave the EU and seek an independent trade deal with the US. Trump brutally intervened in the Tory conflict over Brexit to undermine May, and then told her Britain should not negotiate with the EU but “sue them”.

Undermining the EU is part and parcel of the same strategy that has led to Trump launching a trade war with China, now putting high tariffs on billions of dollars worth of trade in both directions. This is worrying US manufacturers and many farmers – large and small – who depend on the Chinese market. But most of all it causes consternation in Wall Street where falling stock prices risk becoming a torrent.

In the past you could have expected the Congress grandees from either main party to put a rapid end to anything that Wall Street deplored. Now that is not possible. Far from the Republican Senators and Congress people holding the whip hand against Trump, today it is the other way around. Trump’s mass base can be whipped up against incumbent Republicans at any time. This is a new and ultra-right wing political force, with some parallels to fascism in the 1930s, although it does not need, while it is in the government in a country with a para-militarised police and hugely repressive court system, 1930s-style stormtroopers in the streets.

Trump and his allies are consciously promoting hard right political forces internationally. An official of the Trump government, the ambassador for religious freedom (!), has complained to the British government about the imprisonment of Tommy Robinson. Trump’s unofficial outrider, Steve Bannon, is touring Europe, talking to the Front National in France, the Lega in Italy and appearing on Nigel Farage’s LBC radio show during which he called for Robinson’s release. Trump himself has no problem promoting Boris Johnson as next prime minister in the UK, or attacking Angela Merkel over immigration, benefitting her right-wing critics in the AfD (Alliance for Germany) and in the Bavarian wing of her own party coalition, the CSU. 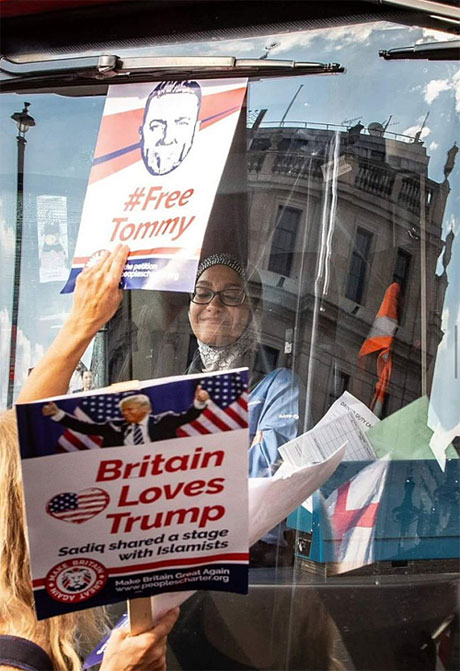 On 14 July, the most recent Free Tommy Robinson demonstration took place, mobilising a few thousand. An RMT contingent from the anti-fascist counter-protest was attacked by fascist thugs and Steve Hedley and Bridget Power were hospitalised. The Left and the labour movement have to sound the alarm and organise much wider forces against the Football Lads Alliance and similar ultra-right gangs.

The hard right in Britain is now a mutually-reinforcing continuum that stretches from Jacob Rees-Mogg to UKIP, to Britain First and the Football Lads Alliance. The event that has generated this force at its present level of determination and effectiveness is the vote for Brexit. One thing that Trump said on his visit that was true was that a large part of the Brexit vote was a vote against immigration.

Anti-immigrant racism has been rampant in the base of the Conservative Party since Enoch Powell’s ‘rivers of blood’ speech in 1968 – and before. It was fostered by Margaret Thatcher talking about the danger of Britain being ‘swamped’ by immigrants. But it was put front and centre by the campaign to ‘take back control’ during the Brexit referendum. It was what animated the main Brexit-voting areas, especially in the middle-class suburbs. And it is on the front page of the Mail, the Express, the Sun and the Telegraph every day of the week.

British politics is undergoing a sharp polarisation, caused by neoliberal austerity and the economic crisis of 2007-8. These are dangerous and difficult times for the Left, which has strong forces arrayed against it. But the anti-Trump demos showed the potential power of those who champion social equality and inclusion, women’s rights and anti-racism. A huge struggle against the racist right will be needed to ensure those values are embraced throughout society.