Brexit is the trampoline upon which Johnson thinks he can bounce himself into Number 10 Downing Street.

This is extracted from Brexit Boris: From Mayor to Nightmare, in which Heathcote Williams, who died in July 2017, uncovers the lies, the sackings, the betrayals, the racist insults, the brush with criminality, that should have got Boris Johnson disbarred from ever being considered for high office.


Boris Johnson has been the most vocal of those lining up to wrench the country they claim to love away from the dastardly clutches of a Europe which they see as undermining their sovereignty and hence their own power. They do not want to love their neighbour. They want to divorce him.

Johnson is someone whom the right-wing media are fond of describing as a ‘national treasure’. He has a bumbling, blustering manner which some find engaging and others tiresome. He’ll unfailingly ruffle his hair before a TV appearance in order to give the calculated impression of harmless eccentricity. He specialises in self-deprecation which some find winning and others calculated.

Johnson has admitted that he employs self-deprecation as a manipulative ploy, to disarm his potential enemies. In an interview with the American TV channel CNBC he declared:

“Self-deprecation is a very cunning device … all about understanding that basically people regard politicians as a bunch of shysters, so you’ve got to be understood … that’s what it’s all about, I suppose.”

In the light of what lies behind his muddled façade, namely a ruthless and often cruel ambition together with an elitism and a ferocious temper when challenged, it is wrong-headed to describe such a man as a ‘national treasure’. Johnson is a man who values himself and his own agenda much more highly than he does the nation or the nation’s interest.

His friends say of him approvingly, as if it was a virtue, “Boris is about Boris”. They’re saying this, of course, because they admire the man’s remorseless self-promotion and perhaps because, as enthusiastic members of the cult of Boris, they look forward to bathing in his stardust should he become Prime Minister. For that’s what he has most assuredly set his heart on, and what in his madder moments he has spoken of as his “destiny” if not his birthright.

The European issue has been the trampoline upon which Boris Johnson thought he could bounce his 17-stone self into Number 10 Downing Street.

‘Beano Boris’, or ‘Bonking Boris’ as the satirical magazine Private Eye (always at a loss as to why anyone should take Johnson seriously) calls him, has made his pitch for the top job his life’s work.

The prospect has not been universally well received. In a guest column for the New Statesman, Boris’s former colleague on the Daily and Sunday Telegraph, Simon Heffer, claims that “Even Boris’s senior colleagues dread Tory activists handing him the keys to Downing Street”.

Heffer points out that “it is little wonder that the campaign to leave the European Union was so thrilled to receive Johnson’s belated—and confused—endorsement last month.

“However, he did what the campaign views as the right thing for the wrong reason. When Johnson worked with me in the mid-1990s an Oxford contemporary warned me about him, saying he was the most rampantly ambitious person he had ever met and that he believed in nothing apart from himself.”

Heffer begins his column by saying, damningly: “Some people feel that Boris Johnson can do no wrong. They are often those who live vicariously through the celebrities seen on television and followed on the internet, and for whom entertainment is an important distraction. Most entertainment is harmless—no wars have been started or economies wrecked by I’m a Celebrity – Get Me Out of Here! or Strictly Come Dancing. However, our education in citizenship should extend to understanding that when a politician becomes entertainment first and foremost there is a danger that he, or she, may lack the requisites of statesmanship.”

Johnson has something about him that feels at home in a braying mob. In his campaign to restore foxhunting (now illegal) and in his preposterous urging of his fellow-Londoners to take up foxhunting as a way of dealing with urban foxes (Johnson was distressed when the family cat was snapped at by a visiting fox) he is clearly unafraid of the implications of Oscar Wilde’s description of foxhunting as the “pursuit of the uneatable by the unspeakable”. There are many ways in which Johnson qualifies as unspeakable.

The following quotes should be enough to convey a sense of the mind-set of this ‘national treasure’ whom the governing party in Britain has been turning into a cult figure and crediting with inflated gifts such as his being able to rebrand the Tory Party, so often nicknamed “the nasty party”.

Unfortunately for such a project, Johnson has more than his own share of nastiness. He talks of migrants who “leech, bludge and scrounge” off taxpayers. Visiting Uganda, Johnson cheerily said to UN workers and their black driver: “Right, let’s go and look at some more piccaninnies”—a racist word notoriously used by the Tory MP Enoch Powell in his ‘rivers of blood’ speech against immigration.

Johnson likens Chinese workers to “puffing coolies” and he even favours a return to colonial rule for Africa: “Left to their own devices,” Johnson has proclaimed, “the natives would rely on nothing but the instant carbohydrate gratification of the plantain.”

More egregiously still, he adds: “The problem is not that we were once in charge, but that we are not in charge any more.” He accused Nelson Mandela of moving Africa towards a “tyranny of black majority rule”. And he also used his column in the Spectator to claim that the Stephen Lawrence inquiry was a “witch-hunt” against the police.

Johnson’s sexism doesn’t lag far behind: “The chicks in the GQ expenses department—and if you can’t call them chicks, then what the hell, I ask you, is the point of writing for GQ.” For the benefit of readers of the Spectator Johnson claims to have invented the Tottometer—“the Geiger-counter that detects good-looking women”. Appointing him as editor was, in the words of one Spectator contributor, like “entrusting a Ming vase to an ape”.

He supported the homophobic Section 28 legislation and once compared civil partnerships to the marriage of “three men and a dog”.

When one minute Johnson is cracking homophobic jokes about “tank-topped bum-boys”, and the next he is urging the gay community to support him in voting for Brexit on the grounds of the prevalence of gay oppression in Eastern Europe, it is no wonder that Conrad Black, then the Spectator’s owner, characterised Johnson as “ineffably duplicitous”.

Worse however than Boris provoking the ire of the soon-to-be discredited jailbird Black, was how he routinely aroused the suspicion and irritation of his fellow journalists. Rory Watson, a Press Association correspondent who worked in Brussels at the same time as Johnson, has claimed that Johnson “made up stories”.

David Usborne of The Independent considers Johnson to be “fundamentally intellectually dishonest in my view. He was serving his masters in a very skilful way but I never felt he believed a word.” And Johnson’s Etonian contemporary James Landale, now a senior BBC political editor, went into verse about the lies of Boris the journalist—having experienced them at first hand in Brussels:

Boris told such dreadful lies
It made one gasp and stretch one’s eyes. 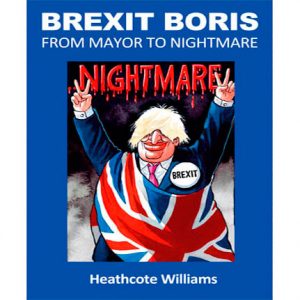 In Brexit Boris – From Mayor to Nightmare, Heathcote Williams is joined by seven top cartoonists in exploring the dark side of Britain’s foreign secretary Boris Johnson.