You are at:Home»Politics»Brexit»Preparing for a Hard Brexit – Mr Bolton Comes to Town

As was widely publicised, Donald Trump’s National Security Advisor, John Bolton, was in London last week, having meetings with senior government ministers. According to the UK government, this was all about negotiating a trade deal after Britain leaves the EU on October 31. Simon Tisdall in the Guardian says that it was not really about trade, it was about aligning a post-hard Brexit Britain with US foreign policy imperatives, such as withdrawing from the Iran nuclear deal and refusing to allow Chinese electronics giant Huawei access to the UK’s 5G infrastructure.

Of course the Bolton visit was about both. There is no divide between economics and politics in the US government; and ever since the Project for a New American Century report in 1997 – the panel that produced it was chaired by John Bolton – the United States has leaned on its military dominance and hence dominant political role, to leverage its economic position.

Hard Brexit is a Godsend for the Trump administration. Boris Johnson, if he wins the upcoming election, will be desperate for a trade deal with the US. Unless that happens, Britain outside the EU will operate with calamitous Word Trade Organisation rules, and giant tariff walls worldwide. And the United States is perfectly well disposed to a trade deal with the UK – on their terms, economically and politically. Britain will have to get into line with US trade demands and also political/military demands. This will involve subordinating the world’s fifth largest economy and its political weight to the needs of Washington; it will amount to a substantial shift to the right in the world relationship of economic and political forces.

Economically the US had made its position crystal clear by publishing in February this year a summary of its trade deal negotiating objectives. This involves detailed demands for full access to the UK for American investment capital, including all state operated or controlled enterprises, with only commercial criteria being used. It contains strictures against ‘unfair’ subsidies for domestic companies, and demands a harmonisation of standards for goods and services, including food and agriculture. In return the UK would be required to accept the US government’s own ‘Buy American’ policy. The document also contains proposals for banning any attempt to discriminate against Israeli goods in trade.

Ironically there is one area where the US position seems more ‘progressive’ than the present practices of the UK government – labour law, which the US says it wants harmonised with ILO conditions on the right to organise unions and decent working conditions. In practice it is unlikely, to say the least, that the US would object to the UK’s anti-unions laws, which would probably be further tightened in the event of a Boris Johnson electoral victory.

There are also numerous proposals for joint oversight and dispute resolution. It amounts to forcing the UK into close alignment with American political and economic needs. It would force a unique subordination to the United States at a level that has not been seen between two major capitalist countries since the Nazi invasion of France, and the American occupation of Japan after the second world war. Any attempt by the UK to pretend to independent foreign policy or trade positions, especially in relation to Iran, the Middle East and China, could be met by immediate trade retaliation. Chlorinated chicken and US firms further enforcing their penetration of the NHS is the least of it; Britain as a 51st state is on the agenda.

This attempt to shore up a Trump-Johnson international hard right axis comes at exactly the same time as Matteo Salvini’s Lega party in Italy has forced a general election, in an attempt to eject his Five Star party coalition allies, leaving the fascists in complete control. 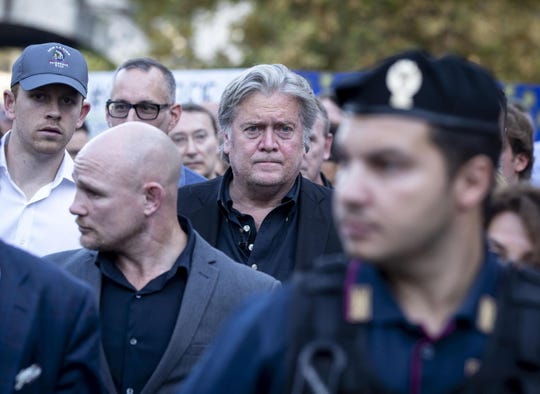 The Lega party is likely to win the upcoming election in alliance the Fratelli d’Italia (Brothers of Italy), led by Giorgia Meloni. The Brothers are the re-branded fascist MSI (Italian Social Movement), the historic continuers of the Mussolini tradition. The same people who cheer in bars when the deaths of immigrants in the Mediterranean are reported on TV News, will also cheer the election of an all-fascist government.

The Lega-Five Star government has already resulted in a spike in racist attacks against immigrants and Roma people, as well as the death of hundreds of would-be immigrants who have drowned as a result of their flimsy boats being refused permission to land and driven out to sea.

“The list of reported racist incidents in Italy from the beginning of this year is shocking. In Lecce province, a young boy from Sierra Leone was battered on the back with a chair as his assailants racially abused him and told him to ‘go home’. In Rome, a 12-year-old Egyptian was verbally abused and beaten up so badly by a group of older boys that he ended up in hospital. A black brother and sister were pilloried by a schoolmaster in Foligno, in central Italy. Women of colour are more and more treated as if they were sex workers – and not only in the street but even in public offices. Many incidents go unreported, but that doesn’t take away from the fact that what is happening in Italy is a sign of a descent into barbarism.”

The election of a Salvini-led fascist government will lead to a new crisis for the EU, with a strong temptation by the Lega-led government to repeat Britain’s exit from the EU and more closely align with the United States. This corresponds of course with the Trump administration’s plan to force European politics to the right and widen its alliance against China.

The news that the German economy is sliding into recession is a confirmation of the warnings of many economists, that there is a danger of a new world slump. A time of new economic turmoil, at a level as big or bigger than 2008, with the far right on the march and the left retreating in many places, highlights major dangers for the world working class.

In these circumstances, the announcement of a new left-wing pro-Brexit campaign is, as Lenin once put it, like wishing people many happy returns of the day at a funeral.