You are at:Home»Politics»Brexit»Paul Mason: ‘Our Secret Weapon to Defend Democracy Is Ourselves’

Parliamentary options to protect democracy are limited, but we can use mass civil disobedience to create a situation politically unbearable for the Tories.

We’re being collectively gaslighted, and we know it. When Boris Johnson and a string of ministers tried to tell the British people that it was “routine” to suspend Parliament for five weeks, we could see from their faces and body language that they knew it was a lie.

But this cynical deployment of the smirk and the shoulder shrug comes at a cost, as Johnson will now find out. Last night, as I joined the thousands occupying the greens and squares around Parliament, I met people furious at the blatant theft of their democracy. Some had simply left their office with a hand-scrawled sign, to take part in their first ever political act.

They did so because they have an innate sense of the beauty and fragility of parliamentary democracy, even if they don’t get the intricacies. 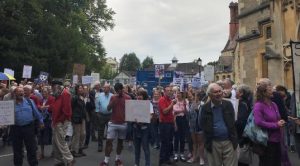 Hundreds marched through the Cotswold town of Malvern on Thursday evening

Secondly, his staff briefed the media that, should Parliament vote to stop him, or to remove him as Prime Minister, he will ignore them. We are now warned, again by his unseen spokespeople, that he will refuse to forward any emergency laws passed to the Queen for Royal Assent. That’s what makes this a coup.

This is such a clear attack on parliamentary democracy that it not only brought progressive people to the streets, it has knocked the wind out of the middle class racists and xenophobes who support the Brexit Party and No Deal as a project.

The moral strength of the Leave argument was always that we would “take back control” via parliamentary sovereignty. It drew on a strain of radical democratic principles that has always been strong within English nationalism, and which stand at odds with what Johnson has done. So, from today, the struggle is no longer about Leave versus Remain. It’s about whether Britain is going to be a political and economic colony of Trump’s USA.

But where do we go from here? It’s said that Johnson wants exactly this kind of confrontation. We know his backroom mastermind, Dominic Cummings, revels in military geek-speak from the Vietnam War era. For Cummings, the aim is always to “make the enemy react to you” – and to shape the battlefield in advance so that we lose.

Looked at this way, Johnson’s parliamentary shutdown was simply the programmed response to opposition MPs throwing him off-balance. On Monday, MPs from across all parties agreed to take control of parliament and block No Deal. So within 24 hours, Johnson’s playbook meant he had to do something to throw that off balance. The coup was the result.

The parliamentary options are now limited. Phase one is for MPs to take control of the parliamentary agenda, through something called Standing Order 24. Phase two – being prepared right now – is to publish legislation stopping No Deal. Phase three is preventing Johnson and his allies from filibustering or sabotaging that legislation.

If we get through all these phases by the 14th of September, when parliament is due to be suspended, Johnson has the following options: he can ignore the new law, triggering a total constitutional meltdown that will see my friends and I transfer our protests from Downing Street to Buckingham Palace, or he can call a snap general election.

In that case, the opposition parties have 14 days to form a replacement government with a majority in Parliament – and my hopes are growing that they will do so.

But our secret weapon is ourselves. Whether it’s at the Oxford Union or on the wretched PPE course the elite all seemingly have to attend, what I’ve noticed is the total disdain among otherwise clever people for mass action. People in these elite circles regard the spectacle of the streets like dog-dirt on their shoes. As a result, they have no idea of its power – both to change politics and to transform and exhilarate the people taking it.

What we need now is a mass peaceful movement of civil disobedience. Protest theory tells us that if around 4 percent of the population simply refuses to comply with the powers that be, we win.

Authorities can tolerate mass demos, even isolated sit-downs in Whitehall. But Tory MPs live in the real world of high streets, shopping centres, village fetes, private members clubs – the very civil society that Margaret Thatcher once claimed did not exist. There are not enough security guards, police or cameras to prevent every public space – from a football match to Westfield on a Saturday afternoon – becoming the venue for some goodnatured and peaceful symbolic action that starts a conversation and calls people onto the streets.

Add to that the power of networks. The three tools you need for mass online movements are networks of activists, some Twitter “superstars” and a technology platform that can leverage all the power into one place at the right time. By my reckoning we have the first two, and could have the third going by Sunday night.

Another thing we have is the power of laughter; these dour-faced hypocrites in oversize twill suits most certainly don’t.

With all these things – mass action, networks and humour – we can, like the Hong Kong protesters, “be water”. Flow around obstacles in a way that makes their Vietnam-era political combat strategies irrelevant.
At our impromptu meeting last night I heard a refugee from Chechnya, a migrant worker from Poland and a 13-year-old schoolgirl take the mic and call, in simple language, for a radical change. Here’s why that is important: it may be that we can’t stop Brexit. It may be that Johnson crashes us out on the 31st of October, to cheers from Trump and the tabloid press. But we can make the overhead cost of that – and the chaos that follows – politically unbearable for the Tory party.

Even No Deal is not the end of Brexit. In the end, Britain will have to sign a deal with Europe. It will be a straight choice: Trump’s terms or Europe’s terms.

A government of progressive parties, determined to make that deal fair and keep Britain close to Europe, would stop Farage and Johnson’s attempts to hand our economy over to the USA – and leave a pathway for the next generation to re-enter the EU, if they’ll have us. This massive self-own by the Tories makes that much more likely.

But the best case scenario is that we drive Johnson from office, and in the process shatter the tawdry alliance of billionaires and racist pensioners who support No Deal.

I’ve learned – from reporting the Arab Spring, Occupy, the Greek crisis and the Gaza war – that the most important question in a crisis is: “Where am I going to put my body?” By turning this from an issue about Brexit into an issue about democracy, Johnson just gave millions of people a reason to ask themselves that question.