You are at:Home»Multimedia»Politics of Fashion»London Fashion Week: A Manifestation of our Denial

Friday 13th saw the opening of London Fashion Week. Just before dawn, a group of five Extinction Rebellion protestors glued themselves to the doorway of event space 180 The Strand. Hand in hand they stood quietly in the cold, purposefully saintly in flimsy white clothes. 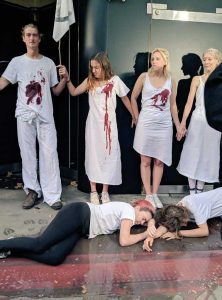 As the sky lightened, more protestors arrived and soaked the pavement with buckets of fake blood. Red ink splattered the white clothes of the five. Police and security guards moved in, but then gave up. The protestors lay down on the pavement, their ‘Fuck Consumerism’ and ‘Beyond Fashion’ T-shirts soaking up the red liquid. Above the London pavement, plastic billboards promised beauty, glamour, and excitement with every purchase. 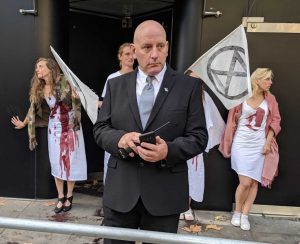 Two hours later the Fashion Week audience arrived. Logoed Mercedes Benz and black cabs pulled up at the curb, people with passes formed a queue behind metal railings and security guards, every attendee dressed with painful studiousness. Silver boots and clipped moustaches, baseball caps next to a towering mauve and yellow headdress, pink sunglasses matching a pink coat, chunky oversized sneakers, and layers upon layers of black cloth. They were an audience living for spectacles: they had come to attend a spectacle, and had striven hard to themselves be spectacles capable of competing in a crowd.

The Extinction Rebellion protestors had not left. They were still stuck to the building and others had gathered in a small crowd around a portable sound system. Their voices rang out around passionate arguments, they were kinder and more patient than most agitators.

Many of them used to be part of the fashion system – until they woke up and smelled the burning. So now they were disrupting Fashion Week, standing as a living reminder that our society, led by the dancing promises of retailers, has gone badly wrong. The audience did not want to hear it. The audience wanted to artfully observe the impact of their look on their surroundings, to be photographed, to pretend not to care.

"Why is this industry – perceived as the zeitgeist – not acting on the warnings?"
London Fashion Week off to a bloody start as @boycottfashion stage a die-in for the planet. #LFW pic.twitter.com/JVZx1ZlxPt

Over the sound system Extinction Rebellion described the fashion industry as ‘playing the fiddle while Rome burns’. The queue was a Hunger Games moment, a Fashion Week audience of outlandish ‘Capital’ people refusing to see the reality the ‘Districts’ had brought to their door. It was an indifference to reality that reduced the spectacle of fashion to sad blandness.

The protestors made reality clear: brands at Fashion Week are showing collections to be sold in 2020 – the year we need to alter course if we are to avert runaway climate change. Next time the trade show returns to London, brands will be producing and showing clothes for the year 2021 – past the climate deadline set by the UN.

Bangladesh is draining its precious groundwater to feed thousands of fashion factories, the Aral Sea has been dried up by cotton production, every wash-load of polyester puts 700,000 microplastic fibres into the environment, and in 2015 the fashion industry was responsible for 1.7 billion tonnes of CO2 emissions. Under the shadow of facts like these, Fashion Week’s business-as-usual approach is unforgivable.

The fashion industry’s relationship with the future is deeply disturbing – it is simultaneously obsessed with the future and unable to confront it. As an industry, it constantly looks ahead and yet it won’t. Fashion wants to be the future, to construct it by defining what new things we should lust after, and yet it refuses to see the looming precipice this approach has created. All it can truly promise us is a headlong rush into disaster. Under capitalism we have been taught to relate more to commodities than we do to nature itself. We no longer see ourselves as part of nature; rather the earth is something to be gloriously conquered for profit. Instead of existing in harmony with each other and with the planet, humans are taught to measure their success by their distance from, and indifference to, nature.

Extinction Rebellion described Fashion Week as ‘wearing the manifestation of our denial.’ Ultimately denial and indifference has one purpose – it makes exploitation easier. This exploitation, of the planet, of animals, and of people, is the heart of the fashion industry.

Now is not the time to give up. Rather exploitation must be challenged in its entirety. Extinction Rebellion have opened up a powerful space, exposing the hypocrisies of the industry. Now we must demand climate justice that goes hand in hand with social justice, both here and across the Global South. This means linking up with campaigns and trade unions in countries like Bangladesh where on the one hand climate crisis is already causing death and destruction, and where on the other exploitative factory jobs remain vital sources of income – these two issues have the same cause and the same answer and we cannot afford to separate these conversations from each other.

A sobering point from XR: #LFW brands will soon be 'showing clothes for a season that marks the turning point we must adhere to to avoid collapse.'
Sara Arnold from @boycottfashion pic.twitter.com/pEAz5qa1Qs

Change means continuing to build a movement that rejects the premise that people are little more than ‘consumers’ whose only power is in choosing Product A or Product B. It means leaving behind the notion that fashion is a democracy where individuals have equal standing with corporations hell bent on competitive profit maximisation.

It means solidifying calls for planetary protection into binding legislation and enforcement, in holding corporations and their CEO’s to account for ecocide, and in collectively bringing about a permanent end to ending the exploitation of people and planet.