You are at:Home»Politics»Palestine»Israel, creeping fascism, and the ferocious attack on the Labour Party

If the left does not learn how to fight – and learn fast – it is liable to be engulfed by the tidal wave of nationalism and racism that is now sweeping the world.

In May this year, the Israeli Knesset passed a controversial new Nationality Law which formalises a Zionist form of apartheid. Just to recap, apartheid was the white-supremacist system that operated in South Africa between 1948 and 1994 and had the effect of denying citizenship to the black majority. The new Israeli Nationality Law has comparable effect. It proclaims Israel to be ‘the nation-state of the Jewish people’. As far-right Israeli Prime Minister Binyamin Netanyahu proclaimed from the podium during the debate: ‘This is our country: the state of the Jews.’

There are now seven million Israeli Jews, the vast majority of them immigrants or the descendants of recent immigrants who arrived in the country at some point during the last century. Israel can therefore be accurately defined as a ‘colonial settler-state’. Most of the indigenous population were forcibly removed – as we might say nowadays, ‘ethnically cleansed’ – mainly in 1948 and 1967. The replacement population comprises recent immigrants from other parts of the world. This necessarily violent process has been funded, armed, and sustained by foreign powers, principally the United States.

The dispossessed comprise ten million Palestinian Arabs, some two million still living in Israel, a further five million in the West Bank and the Gaza Strip, and another three million or so in Jordan, Syria, and Lebanon. Most of these people are refugees or descendants thereof. The West Bank and the Gaza Strip are, effectively, ‘bantustans’ – that is, they are comparable to the small, impoverished, overpopulated ‘homelands’ where black labour was corralled under South African apartheid.

The oppression of the Palestinian people by Zionism and US imperialism has continued unabated for 70 years. The new Nationality Law declares ‘the development of Jewish settlements nationwide’ to be a ‘national priority’. In other words, the seizure of Palestinian land to provide homes for foreigners is an ongoing process. Donald Trump, the far-right US President, has recognised Jerusalem as the capital of Israel and relocated the US embassy there. He has also cut off funding to the United Nations Relief and Works Agency for Palestine – funding on which millions of desperately poor Palestinians depend.

Trump may be a boorish, bigoted, bullying narcissist. But we should not overstress his bar-room banality. He represents a wave of nationalism and racism that has a hard fascist core. The latter is best represented by Steve Bannon, the former Breitbart chief and Trump advisor, who has appointed himself roving ambassador for an emergent fascist international. Bannon’s vision of the world is as crazed as Hitler’s once was. He imagines a global struggle between ‘the Judeo-Christian West’ and the rest – the rest including, most notably, Muslims, Chinese, and Latinos, but ultimately the entire mass of non-white humanity. Note the new fascist dichotomy: no longer Aryans versus ‘the international Jewish conspiracy’ – oh, so 1930s! – but the Jews and the Christians of the West versus what Bannon avoids calling (though this is what he means) ‘the international Islamic conspiracy’.

This is the new far-right alliance. Anti-semitism was the primary expression of racism in Germany, France, Britain, and many other countries in the 1930s. Not any more. Now it is Muslims, Latinos, migrants, and, more generally, the people of the Global South who are targeted. The Zionists, by contrast, are inside the tent, reconfigured as ‘one of us’, recast as leading protagonists of a 21st century crusade for ‘the Judeo-Christian West’.

We should not underestimate the threat posed by anti-semitic forms of fascism. Bannon has an anti-semitic record which he now downplays and his new-found Zionist friends choose to ignore. In much of Eastern Europe – notably in Hungary and Poland – anti-semitic racism has been a prominent feature of the politics of the neo-fascists. But anti-semitism – for the time being at least – is not the ideological driver of far-right movements in America and Western Europe: it is anti-Muslim and anti-migrant racism.

The informal alliance between Zionism and fascism, on the other hand, is a reality of early 21st century politics. In the face of this – and, specifically, in response to a massive attack by Zionists, Blairites, Tories, and their media echo-chambers – the Labour Left has capitulated. The Labour Party NEC has signed up to the International Holocaust Remembrance Alliance (IHRA) definition of anti-semitism. This includes the following as an example of anti-semitism: ‘denying the Jewish people their right to self-determination, e.g. by claiming that the existence of a State of Israel is a racist endeavour’. In other words, it equates anti-semitism with anti-Zionism. The IHRA definition is not ‘internationally agreed’ – as widely stated by right-wing commentators. On the contrary, it would be better described as ‘highly contested’, since it amounts to wholesale endorsement of the policies of the Israeli state, including the dispossession of the Palestinian people of their land, their civil rights, and their nationhood, none of which the IHRA considers to be ‘racist’.

A qualifying statement passed at the same time may contradict the sense, if not the literal meaning, of some of the IHRA definition, but this appears to be a transparent face-saving exercise, and it cannot alter the damage done by the substantive decision to cave into political pressure on a central question of socialist principle: that one stands with the oppressed (the Palestinians) against the oppressor (Zionism, the Israeli Defence Force, and US imperialism).

If you don’t run, they can’t chase you. But the Labour leadership has been running on this question ever since it first came up in 2016 in relation to Bradford West MP Naz Shah’s suggestion that Israel might be relocated to the United States, followed, in the context of the ensuing row, by this remark of Ken Livingstone on the radio: ‘When Hitler won his election in 1932, his policy then was that Jews should be moved to Israel. He was supporting Zionism, before he went mad and ended up killing six million Jews.’

Naz Shah was alluding to the fact that modern Israel is largely a construct of US imperialism. It has been reliant on massive levels of US economic and military aid throughout its existence as an independent state. Ken Livingstone was making reference to a simple historical truth: the Nazis wanted to get rid of the German Jews, the Zionists wanted to create a homeland in Palestine, a secret agreement was therefore made between – the Haavara Agreement signed on 25 August 1933 – to facilitate German Jewish emigration to Palestine, and around 60,000 German Jews did indeed emigrate to Palestine between 1933 and 1939. Neither Naz Shah nor Ken Livingstone were being anti-semitic. The truth is not anti-semitic. What is at stake here is not simply the fate of ‘the wretched of the earth’ – in this case, the Palestinians – but the historical truth about the (racist) Zionist project that has created the modern state of Israel.

When the onslaught on the Labour Left started, the right tried to twist anti-Zionist statements into anti-semitic statements. Now, gaining confidence, they have abandoned all pretence, openly proclaiming that anti-Zionism equals anti-semitism. This has been the basis of a ferocious smear campaign against Corbyn, who, of course, has a long record of anti-war, anti-imperialist, and anti-racist activism. It is spearheaded by an unholy alliance of Zionists and New Labourites, cheered on by the Tories, the BBC, and The Daily Mail. Its purpose is not only to undermine solidarity with the Palestinians, but to weaken the left and terminate the Corbyn leadership, even at the risk of wrecking the Labour Party’s chances of winning the next general election. Corbyn – the red cuckoo in the neoliberal nest – is to be evicted by any means necessary.

Some on the left have argued that the Labour Party should drop ‘unpopular’ issues – like opposition to nuclear weapons and defence of migrant rights – in order to win support by focusing on bread-and-butter economic and social issues. This is what the leadership appears to be doing. They are largely silent on the mounting tide of anti-Muslim and anti-migrant racism fostered by Brexit and the War on Terror. They are endlessly apologetic about an issue – anti-semitism in the Labour Party – that is almost entirely media fabrication. Instead of ducking and diving, they should have stood their ground and stated the simple truth: to be anti-racist is to be anti-Zionist and pro-Palestinian; to be anti-racist is to be anti-Brexit and pro-migrant; to be anti-racist is to be anti-war and pro-Muslim. They should have faced down the legion of right-wing charlatans who have made a mockery of historical truth and the meaning of words by labelling Jeremy Corbyn a racist on the basis of his record of solidarity with the oppressed.

They are out to smash the Corbyn leadership and the left’s tradition of international solidarity. And make no mistake: the hostile political alliance that is engaged in this project stretches all the way from Steven Bannon to Stephen Kinnock. The fascists, the neoliberals, the Zionists, and the Tory media are all singing from the same hymn-sheet.

If the left does not learn how to fight – and learn fast – it is liable to be engulfed by the tidal wave of nationalism and racism that is now sweeping the world. The Corbyn/Momentum leadership has just revealed a disastrous lack of political backbone. You cannot fight for radical change by ducking arguments, peddling lies, and running panic-stricken when the enemy attacks. To change the world, we have to win over the masses. To do that, we have to confront every shabby right-wing argument they throw at us and expose it for what it is.

If the Labour leadership thinks that capitulation on the question of the IHRA definition of anti-semitism will end the crisis, they are wrong. The faster you run, the faster the chase. The right will just keep on coming. Their end-game is the destruction of the Corbyn leadership and the reassertion of untrammelled neoliberal control over the Labour Party. The left has to stop running and start fighting.

Neil Faulkner is the author of Creeping Fascism: Brexit, Trump, and the Rise of the Far Right and A Radical History of the World. 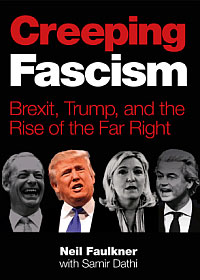 Creeping Fascism – Brexit, Trump, and the Rise of the Far Right

This book is an urgent call to arms. It argues that the film of the 1930s is running in slow motion, and that we face the clear and present danger of ‘creeping fascism’.