You are at:Home»Politics»Jeremy Corbyn»How the BBC toxifies Jeremy Corbyn and makes him stink like Donald Trump

Where Jeremy Corbyn is concerned, the BBC seems to see its role in shaping political events rather than merely ‘reporting’ them.

Source: Extracted from Mark Doran’s blog, which can be read in full here…

On January 10, Jeremy Corbyn gave a speech in Peterborough that was presented by the media as a debacle. Here are three things that — in that single day! — the BBC did to distract attention from Corbyn’s message and to toxify him as an individual. I present them in the order in which I happened to see them as the day wore on.

First, a BBC TV News animation in which one of the 12 stars of the European Union flag detaches itself — in a reference to so-called ‘Brexit’. 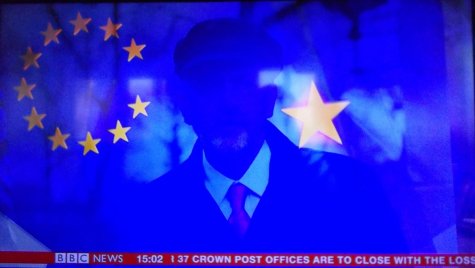 This star then turns red…

And lands in the centre of Corbyn’s cap…

See what they did there? Corbyn — by any rational analysis a mild social democrat who has never even proposed so basic a socialist policy as ‘workers’ control of the means of production’ — is here made to look like Mao Zedong: he gets a Chinese People’s Liberation Army cap — and a quick bit of toxification in terms of those decades of far-away tyranny and destruction, the millions killed, the dogmatic political inflexibility, etc.

A little time passes, and what do I see next? Ah! I see something online that features Laura Kuenssberg — the ‘Political Editor’ of BBC News, and very obviously the head of the Corporation’s Anti-Corbyn Unit. Let’s look closely…

There are in fact three fascinating elements there. First, there’s the choice of headline: without there being a quotation mark in sight, and whatever his half-hour speech was really about, Corbyn is credited IN BIG PRINT with saying the one thing that is guaranteed to constitute a red rag to many millions of working class voters whom the Labour Party is currently seeking to win back.

(And this, let me remind you, comes from the BBC which has allowed Nigel Farage of the anti-immigration party UKIP no fewer than 31 appearances on Question Time since November 2000: ever wondered what a broadcaster’s attempt to split the working class anti-Tory vote would look like?)

Secondly, there is what follows it — in the form of the denial of an embarrassing, undermining U-turn: ‘Labour’s leader denies…’. See that? That’s what you write when you want to place an idea in people’s minds while still being able to claim that you weren’t really trying to place the idea in people’s minds. (So, for example: ‘Corbyn denies that he kills tiny and helpless kittens using a big hammer’. See? He denies it; and it’s not true anyway — but you still felt a feeling and saw an image that I created for you.)

Thirdly, there’s the framing and cropping of the photo. See how Kuenssberg appears as a huge and dominating visual element, filling almost a third of the space? And how Corbyn, by contrast, is presented as a tiny and distant figure — and, on top of that, shown as literally ‘in a corner’?

And then there’s Newsnight. Less than eight hours after the BBC had made Corbyn stink like a long-dead Chinese communist, viewers saw their national broadcaster change tack — and make Corbyn stink like today’s liberal hate-figure, Donald Trump.

See how they did it? They did it by producing and broadcasting — for an extended period — a photograph of something that has never, ever happened: Corbyn wearing a Donald Trump-type hat.

Consider what had to happen for that image to have come into existence. Someone in charge of a budget and able to give instructions to a skilled photoshop operator will actually have sent out an order: ‘Look, stop what you’re doing: we need something for 10.30pm. Get a photo of Donald Trump in his red hat. Take him out of the picture so you’ve only got the hat. Re-write the words on it so that they say ‘Make Britain Great Again’. Got that? Then find a high-resolution photo of Jeremy Corbyn, seen — and lit — from the same sort of angle, and put the hat on it so it looks like he’s wearing it. Is that clear…?‘

Nor was this the end of that day’s BBC onslaught. Before long, they had gone to Twitter and were advertising one of Newsnight‘s interviews in the following terms…

If you can’t tell what attracted my attention to that, simply take a look through the programme’s Twitter timeline — and see if you can see the pattern in who has, and who has not, been described as ‘getting grilled’.

I spoke earlier of the twin media mechanisms of ‘smacking’ and ‘silence’, and of their role in shaping political events rather than merely ‘reporting’ them. In connection with Corbyn, I want to underline my point by presenting the entire text of his Peterborough speech — which you can see here. When UK readers have read it (or watched the video below), I hope they will be so kind as to consider this question:

On January 10, Corbyn featured in the BBC’s news and current affairs output over and over again: he and his speech were referred to, and discussed, during the day, in the evening, and late into the night. As you’ll see from the video, the BBC — as it was obliged to! — actually broadcast the whole speech live (albeit on a news channel most people don’t watch at a time when most people are busy working anyhow).

Yet how much of what he said in that long speech did you yourself actually encounter in all of that studio-based ‘coverage’? Or, for that matter, in our proudly ‘free’ billionaire-owned press? In other words, when you came to read the text linked to above — or to watch the speech as recorded — how much of it still came as a complete surprise to you?