You are at:Home»Politics»Anti-Semitism»How antisemitism is used as a weapon to weaken, stigmatise and divide the left

Other forms of racism are downplayed – notably Islamophobia, which is a form of ‘respectable racism’ firmly in the political mainstream.

There is currently another round of attacks on Jeremy Corbyn’s leadership of the Labour Party on the basis of alleged antisemitism – or failures to deal with it effectively. This is a long-running saga. The charges against the Labour leadership have become progressively harsher: we are now routinely being told that Labour is an ‘institutionally antisemitic’ party.

While there have indeed been instances of antisemitism from some Labour members, the evidence shows overwhelmingly that it is not a widespread problem in the party, it has increasingly been addressed in a serious way, and the notion that Corbyn personally is complicit is absurd.

In the US, meanwhile, there has been an outpouring of vitriol directed at Ilhan Omar, a newly-elected congress member, for critical comments of Israel that have been tendentiously spun as antisemitic. In January, Omar became one of the first two Muslim women members of the US Congress in history, alongside Palestinian-American Rashida Tlaib. Together with another new left-wing Congress member Alexandria Ocasio-Cortez, Omar and Tlaib have rapidly developed a high profile for challenging the conservative status quo in Washington politics. They have been faced with the inevitable backlash.

In both cases – Corbyn here, Omar in the US – antisemitism is being weaponised. It is wrongly treated as a smear tactic, cynically deployed to attack the left. This is motivated, above all, by the fear of the kind of politics represented by a new left.

In the UK there is real anxiety among the political establishment, and in the British state and ruling class, that a socialist could become prime minister. In the US the threat is less serious, but the trio of refreshing new voices in Congress – together with Bernie Sanders’ campaign for the 2020 Democratic presidential nomination – represents a growing rejection of the old order, and a burgeoning interest in broadly socialist ideas.

These campaigns around antisemitism are therefore a misuse of a real form of racism, geared towards political ends: weakening, stigmatising and dividing the left. They involve ignoring or downplaying the more serious instances of antisemitism on the far right and, by weakening the Left, threaten to damage the political forces that can actually confront the growing far right and its racism. There is also a massive downplaying of other forms of racism, notably Islamophobia – which is a form of ‘respectable racism’ firmly in the political mainstream.

There was recently a triple whammy of insulting comments by senior Tory ministers in the space of just 48 hours that illustrated the point. Amber Rudd referred to shadow home secretary Diane Abbott as ‘coloured’. Andrea Leadsom responded to a request – from a Muslim Labour MP – for a debate on Islamophobia by saying it was a Foreign Office matter. Karen Bradley, meanwhile, caused great offence to Northern Irish Catholics by suggesting that killings by British security forces in Northern Ireland had not been crimes.

These ‘gaffes’ were swiftly followed by the news of the death of Shamima Begum’s baby in a refugee camp, exposing the callousness of Sajid Javid, home secretary, who had made Begum stateless. Yet, in this context, it is Labour – not the Tory Party – that receives the lion’s share of media denunciation and whipped-up controversy.

Opposition to Israel is not antisemitic

One thing that the sustained attacks on both sides of the Atlantic have in common is the question of Israel. Ilhan Omar faced a backlash due to comments she made about Aipac, the American umbrella group for pro-Israel lobbying  campaigns, and its influence on US politics, and for wider criticisms of the Netanyahu government and Israeli abuses of Palestinians’ human rights. Last summer’s furore over alleged antisemitism in the Labour Party pivoted around how to define antisemitism. There was a major campaign to force the party to adopt the full definition, including very controversial examples relating to Israel, proposed by the International Holocaust Remembrance Alliance (IHRA).

The IHRA code was subsequently adopted by the Labour Party’s national executive committee. It treats as antisemitic such things as saying that Israel is a ‘racist endeavour’ or challenging Jews’ right to self-determination, which in practical terms means the state of Israel. Many Jewish organisations worldwide have condemned the definition on the grounds that it extends the meaning of antisemitism to encompass fair criticism of Israel. Attitudes towards Israel have always varied within Jewish communities, which have rich traditions of anti-Zionism and of non-Zionist currents. These Jewish groups have also expressed concern that it makes the struggle to defeat antisemitism harder by focusing on the wrong targets.

This does not mean that the entire weaponising of antisemitism is driven by Israel or its lobbyists. That is to grant them an exaggerated influence. Their objectives – to delegitimise opposition to Israel’s apartheid regime and its violence, racism and colonisation of Palestinian land – dovetail with how significant parts of the US and UK political establishments view the strategic interests of their own countries.

It also fits neatly with their wider opposition to a rising Left, especially in the field of foreign policy. A great many of the attacks on Corbyn’s politics have focused on foreign policy, such as his personal background of opposition to Nato and nuclear weapons, with senior figures from the British state (former generals or security services chiefs) warning darkly of a Corbyn premiership.

Similarly, Omar’s support for justice for Palestine goes together with a refreshing opposition to US imperialism which is almost unprecedented in mainstream US politics. Her highly critical comments about Barack Obama’s extensive deployment of drones caused outrage in the Democratic Party elite.

The conflation of antisemitism with opposition to Israel does not stand up to scrutiny. Israel is a state built on the ethnic cleansing of Palestinians in 1948-49, creating a huge refugee population. It has been characterised, for the last 70 years, by dispossessing Palestinians of their land, often through force. Israel has developed a system of control that fragments the Palestinian people: Palestinians inside Israel are second-class citizens, those in the West Bank live under military occupation, Gaza’s two million Palestinians endure an open-air prison and the effects of a long-running blockade, and millions more are refugees unable to return to historic Palestine. Opposing all of this is a political and moral matter, not a question of antisemitism.

Why has the defining of antisemitism become so contentious? It is no accident. There has been a concerted push by Israel, and by its political supporters elsewhere, to tarnish opposition to Israeli policies with the smear of antisemitism.

The Israeli state has become more and more strategic in its response, pouring considerable funds into propaganda and lobbying to counter this threat. An integral component of these efforts has been the re-defining of antisemitism to protect itself against criticism. This is necessary because the realities of Israel’s treatment of Palestinians have only got worse.

The military assaults on Gaza in 2009, 2012 and 2014 have galvanised widespread public outrage across the world, as more recently has the murderous suppression of Palestinian protests near the Gaza/Israel boundary. Settlement building has continued, in defiance of international law and United Nations condemnation. Last year’s Nationality Law enshrined apartheid inside Israel by declaring that it is a state for its Jewish citizens only, formally sanctioning the discrimination and segregation that was already part of Israeli life.

The tight alliance between Israeli prime minister Netanyahu and President Trump has helped open up serious cracks in support for Israel among American Jews, the majority of whom are anti-Trump.  This fraying of support for Israel is part of the context for the viciousness and the weaponising of antisemitism directed at Israel’s critics in both the US and the UK. The rise of the BDS movement and threat to the old order posed by a reviving Left are other crucial factors.

We should not be deflected – from both building a mass solidarity movement with Palestine and developing a stronger Left – by the spurious attempts at weaponising antisemitism.

Alex Snowdon is a Counterfire activist in Newcastle. He is active in the Palestine Solidarity Campaign, Stop the War Coalition and the National Education Union. 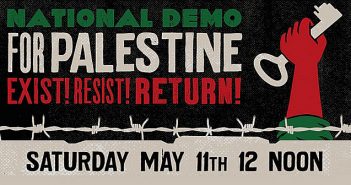