You are at:Home»Politics»Brexit»Brexit – why the cure is worse than the disease and the disease has no cure

Theresa May’s determination to hang on regardless long ago crossed the line from tenacity and is now an affront to democracy. 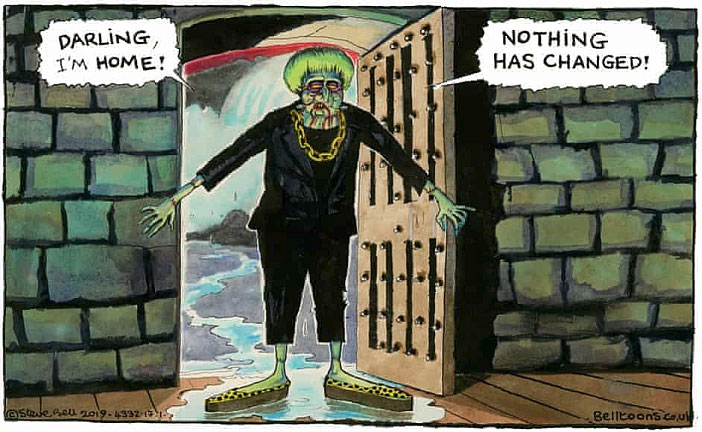 It was Winston Churchill who famously offered up, “The best argument against democracy is a five minute conversation with the average voter.”

Though no elected British minister or politician of the current crop would dare venture anything approaching an endorsement of Churchill’s dismal verdict of the ‘average voter’, lacking his candour and biting wit for one thing, it’s a fair bet that many are sympathetic to it — and never more so than now with the country at sea in a Brexit storm with the clock ticking down to March 29 with no solution in sight.

It goes without saying that democracy, any democracy, only succeeds to the degree that its supposed beneficiaries, the average voter, are informed with a sufficient grasp of the issues. Yet with responsibility for insuring that he or she is informed devolving to the political class itself, along with a Fourth Estate (mainstream media in today’s parlance) ably and honestly fulfilling its role as disseminator of facts rather than a conduit for the prejudices and political hobby horses of its very rich proprietors, we arrive at the myth of a free press across the West and within the UK in particular.

In fact if any issue embodies the corrosive impact of the current state of media ownership in the UK it is Brexit. In the run-up to the EU referendum in June 2016 a veritable tsunami of half-truths, untruth, and obfuscation peddled by a Brexit-supporting media extended itself in ascribing the cause of British society’s ills to Brussels rather than a generation and more of free market Thatcherite economic nostrums, accompanied by an assault on the welfare state, NHS, public services, and the wages and conditions of the country’s working class.

More recently, in the wake of the 2008 economic crash and the resulting imposition of austerity, the callous disregard for the welfare of the most vulnerable in society spiked to the point where it became commonplace to blame their plight on them themselves, adding insult to very severe injury.

In other words, as part of an exercise in deflecting the underlying cause of the economic crisis — in précis private greed and an unregulated financial and banking sector — the political class and reactionary press successfully made the case that its cause was a crisis of public spending and bloated welfare state, thus setting up the most vulnerable as a convenient scapegoat in the eyes of a wider public demanding answers and solutions.

In the years since this scapegoating has continued apace; only now, in service to Brexit, the guns have been turned on migrants, refugees, and by extension existing minority communities, depicted as a threat to that hoary old leitmotif of ‘British values’.

In parenthesis, just what are those values the British people are meant to hold so dear anyhow? Are the product of an empire that plumbed new depths of racism and brutality in its super-exploitation of large swathes of the developing world? Are they the product of a cultural propensity for unleashing war against poor countries, resulting in the slaughter of innocents? Or do they derive from the callous cruelty towards the poor and vulnerable at home that has long been the shameful hallmark of a sociopathic ruling class?

On the other side of the Brexit divide it is impossible to be a fulsome supporter of the EU — certainly not in its current form — underpinned as it is by institutions that stand as a dismal reflection of a tired and outmoded Washington Consensus.

In fact it is no exaggeration to state that whenever a politician of the stature of Jean-Claude Juncker, President of the European Commission, pops up on your television screen your stomach automatically hits the floor. Verily, if mediocrity were an Olympic sport Mr Juncker would boast a string of gold medals; yet by dint of some grotesque bureaucratic trick, the man finds himself endowed with the power to dictate chapter and verse to sovereign governments, which unlike him are accountable to electorates.

The cracks that have appeared in the foundations of the EU recent years, of which Brexit is the most serious, reflects the neoliberal economics it champions; the very same that have wreaked havoc in the lives of millions of ordinary working people. In truth, neoliberalism is a corpse whose burial is long overdue. And whether in the context of the EU or Brexit Britain, until there is a fundamental break with this dead economic model political and social crises across Europe will continue to be the rule rather than its exception.

Despite the narrative to the contrary, Polish plumbers and Bulgarian bricklayers are not the enemy of working people in the UK. Migrant workers are not the cause of the crisis within the NHS, the housing crisis, or any of the other crises that working people in Britain are faced with. Those are a product of the most draconian austerity programs of any advanced economy. Taking a wider view, the enemy of working people of all nationalities and cultures are global corporations with their ability to sow economic dislocation and foment a race to the bottom to the detriment of workers of all lands. And with this in mind, for all its manifest drawbacks the only political entity to stand up to global corporations in recent years has been the EU

The concept of European unity is a sound and progressive one; the role of nationalism across the European continent in producing two of the most devastating world wars and conflagrations in human history leaves no doubt of it. But for there to be a truly united Europe the inclusion of Russia and the exclusion of the US is non-negotiable; for it is the lack of the former and too much of the latter that is the true source of Europe’s problems in the second decade of the 21st century.

I maintain that a Corbyn government within the EU would have a massive catalysing impact on left and progressive forces across the continent, pushing back against the traction of an awakened far right and presenting Brussels with an ideological challenge it has not yet faced. This being said, Corbyn’s stance on Brexit at this juncture is the most coherent and nuanced of all the available permutations mooted, tailored as it is to addressing the regional and national fault lines cleaved across these islands over 40 years of Thatcherism, reflected in the breakdown of the 2016 EU referendum result.

Theresa May’s determination to hang on regardless long ago crossed the line from tenacity and is now an affront to democracy. We currently have general mayhem masquerading as leadership; what we need is a general election and new leadership. The mounting casualties of austerity demand nothing less.

As they continue to pile up, Brexit increasingly takes on the character of a sideshow.

See also:
Brexit, Theresa May and the malign incompetence of the British ruling class