You are at:Home»Politics»Far Right»An invisible fascism is creeping into British society

Britain is not Nazi Germany, but undoubtedly our freedoms are being eroded, both in the organisation of the economy and in the reduction of civil rights.

The UK economy today has some startling similarities to the economy of Nazi Germany and privatisation is at the heart of both. The Spanish economist Germà Bel1 stated that the word – which is synonymous with neo-liberalism and Thatcher – has its origins in the German word reprivatisierung (denationalisation) and the term was first used in English by the Berlin correspondent of the Economist in 1936 to describe how the Nazi economy worked.

The overriding image of fascism is the Nazi jackboot trampling over the brave democratic countries of Europe, and fascism itself will always be associated with a totalitarian state, racial superiority, concentration camps and most of all, the Second World War.

Yet the economic and financial system that underwrote political fascism has not received much publicity, since the victors always write history. Germany lost the Second World War but well before the final defeat, the Western Allies were fighting a new war – the Cold War – against Russia, their old ally, and communism. West Germany was the new ally on the front line facing the Soviets, so it was better to bury much of the truth about Nazism, including the economic system it had used, and the companies that openly worked with fascism.

In the totalitarian world of the Soviet Union, the state owned and ran a centrally planned economy. In Nazi Germany, the totalitarian government still did the planning, but mainly contracted private companies to produce the goods and services needed; giving them an outright monopoly or making them part of a cartel.

Denationalisation first entered academia in 1943 as ‘privatisation’, when Sidney Merlin in the Quarterly Journal of Economics1 wrote that the Nazi party ‘facilitates the accumulation of private fortunes and industrial empires by its foremost members and collaborators through privatisation and other measures, thereby intensifying centralisation of economic affairs and government in an increasingly narrow group that may, for all practical purposes, be termed the national socialist elite’.

Today, the rhetoric of neo-liberalism and free markets is just that same rhetoric, for the reality is that there is the same intensified centralisation, and the neo-liberal elite are the small number of shareholders who, through myriad companies – often financial companies in numerous tax havens – own the actual companies that have benefited from privatisation and outsourcing/contracting out.

Today, it is conveniently forgotten that the financial base of household names such as ThyssenKrupp, Mercedes, BMW, VW, Porsche and Hugo Boss all came from the vast profits made under the Nazi government, when there were no unions, few regulations and cheap labour – very often slave labour from the concentration camps.

AEG made ovens, and still do today. I.G. Farben, made Zyklon B – the gas used in the concentration camps – but the company was broken up after the war into Bayer and BASF. In return for the Nazi Government’s largesse, the companies did not involve themselves in politics.

After the Second World War, the main political parties in Britain accepted that the UK was a mixed economy, with clear dividing lines between the state and private enterprise. Public transport, social housing, health, education, social services, correctional services, job training services, utilities etc were all run and operated by government, centrally or locally, directly or indirectly and there was an amount of democratic accountability.

This consensus ended over 30 years ago, as neo-liberalism took its place. Today, there are four main ways that the State and corporate power are being merged into corporatism – through outright privatisation, franchising, outsourcing/contracting out and PFI (Private Finance Initiative). What all these have in common is, firstly, the loss of any semblance of democratic accountability at local or national level. Secondly, the use cheap labour; unions have become more and more emasculated, EU and UK law allows gangmasters to recruit from low- wage economies, especially in Eastern Europe, and there is very little enforcement of the minimum wage or safety levels. The citizens of Bulgaria and Romania can now work in Britain and, though not reported in the mainstream press, the large companies have been actively recruiting in those countries for some time!

The rationale for privatisation, we are repeatedly told, is that because of competition private enterprise is more efficient than state-run industries, and this has become a quasi-fundamentalist, almost religious belief of all UK governments for the past 30 years. Strangely, it is only British state-run industries that are deemed inefficient. Just one example of a foreign state owned company running a privatised British company is the French state-controlled company EDF. They not only run one of the big six British energy companies but will also get large subsidies from the British taxpayer to build – in partnership with the Chinese Communist Party – an overpriced nuclear power station at Hinckley Point in Somerset!!

With outsourcing and contracting out the reality is that there are only a small number of companies that can compete for these contracts. The main 4 are G4S, Serco, A4e and Crapita (apologies Freudian slip, or reading Private Eye too much – Capita). A study of the various shareholder registers will show that the shareholders are often the same. An example is Invesco, a very large US investment fund who are the largest single shareholder in both Capita and G4S. Is this really competition?

This domination by financial corporations is not just in contracting out, but also in privatisations. This domination will be legally strengthened if the Transatlantic Trade and Investment Partnership (TTIP) now being negotiated by the European Union and the USA comes to fruition. This agreement – currently being negotiated in near secrecy – will enshrine in law the right for the corporations to not only tender for contracts – including with the NHS – but also to sue governments for losses if they can show that the tendering process discriminated against them. These cases will not be heard by normal courts with juries, but by secret tribunals.

It can be argued that though there are economic similarities with Nazi Germany, Britain is a democracy and not a totalitarian state. However, any democratic audit will show that over the last 30 years, our personal freedoms have been reduced, especially the right to protest.

All strikes now require ballots conducted over a period of time, which can eliminate the effectiveness of industrial action. The new legislation promised will make a legal strike virtually impossible. Picketing was legal over 100 years ago, but today there are so many legal restrictions that effective picketing is not a viable option today.

Demonstrations need police agreement in advance, including the route to be taken, so that a spontaneous demonstration as a reaction to events is, essentially, illegal. Even when protestors follow the agreed route, there can be problems. ‘Kettling’ has entered the English language as the process whereby the police can force a large group of protestors into a small area and keep them there for hours.

The police today have more power to arrest on suspicion, without any evidence, than ever before, and the line between legitimate protest and terrorism is being clouded by both statute and the increase in police powers. More cases can be heard in camera, with the defence restricted on the direct questioning of prosecution witnesses. Legal aid is being cut, and protest is becoming a crime.

Britain is not Nazi Germany, but undoubtedly our freedoms are being eroded. An invisible fascism is creeping into our society both in the organisation of the economy and in the reduction civil rights. A reduction that will increase with the Tories now having a small majority in Parliament. If we do not take action soon to stop this we may wake up and find it is too late.

Creeping Fascism – Brexit, Trump, and the Rise of the Far Right 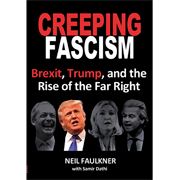 Neil Faulkner’s new book Creeping Faciscism – Brexit, Trump, and the Rise of the Far Right will be published by Public Reading Rooms in March. You can pre-order it here…