You are at:Home»Politics»Alice Kilroy: In memoriam

In life and in politics there are friends and comrades who are too precious to lose. There are people whose absence from this world can never truly be overcome. Alice was one of these people.

I first met Alice in 2001 at a local Stop the War meeting in Islington and worked with her on many campaigns and projects over the next nearly twenty years. From the off she was the proverbial force of nature driving forward the campaign. She wasn’t interested in the doctrinal disputes of the left. They irritated her and she wasn’t shy in letting those who were thus engaged know how she felt. And she had a wicked sense of humour – see below. 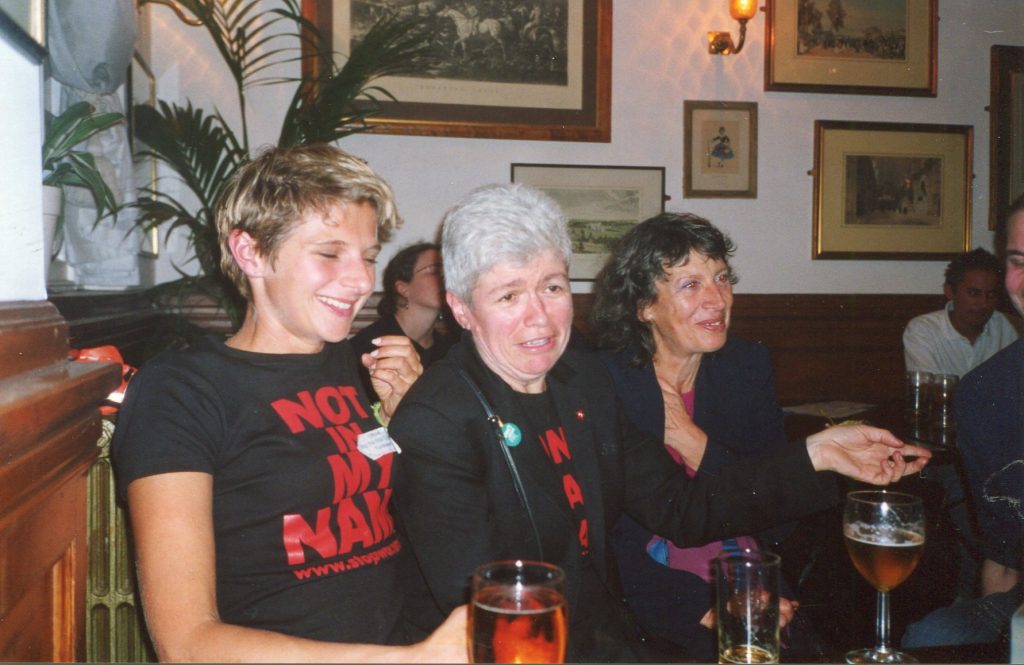 For her the movement was everything. She wanted action and a better world for all. You didn’t want to fall out with Alice. She was one of the warmest and most generous people I have ever met but woe betide anyone she felt wasn’t pulling their weight in the movement 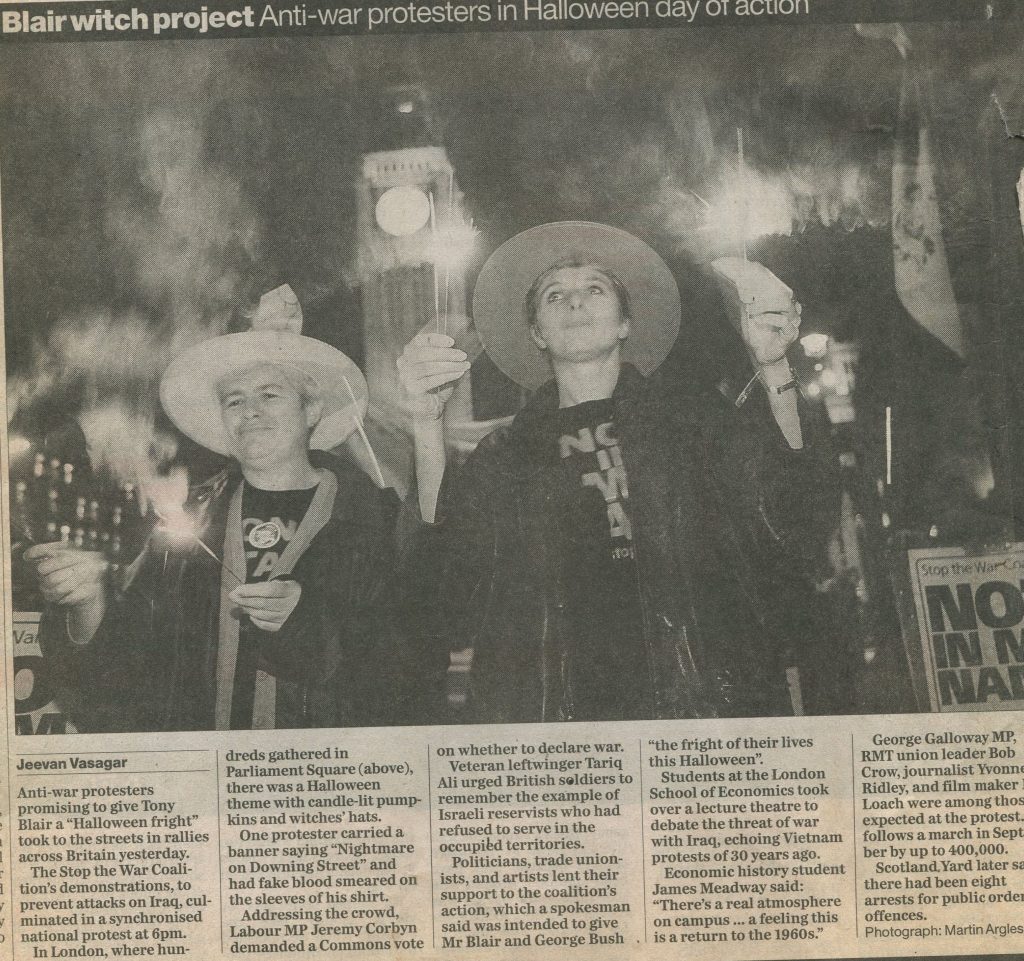 Halloween eve protest. Alice and Laura Dubinsky. 2002 in the Guardian

For many years she was at the heart of the Stop the War coalition. In the early days she made the initial contacts with the Muslim community in Islington when it came under attack and visited the local mosque to express solidarity. In 2002 she was central to the first ever protest against the US detention camp at Guantanamo Bay. 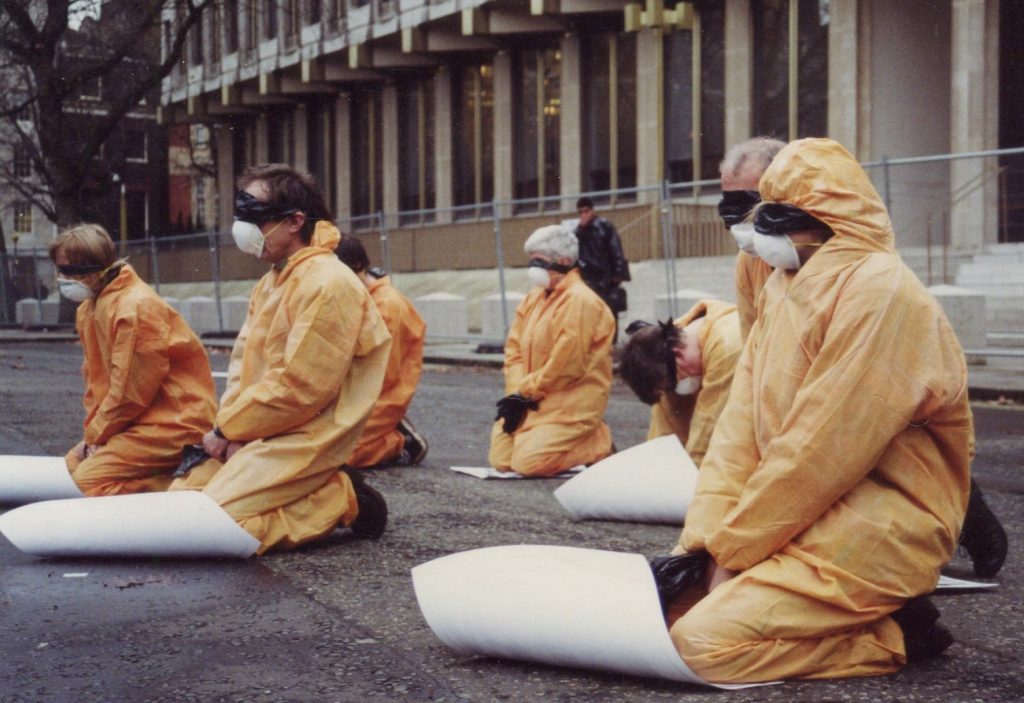 She helped organise the collections from the national demonstrations and ran the stalls. And before we had a proper office we would count the collections in the living room of her council flat. Later on Alice became the finance worker at Stop the War. She had many skills and bookkeeping was one. She kept books for a range of radical projects: the Left Book Club, Muswell Press, Left Unity and others.

Alice was very proud of being a council tenant and never considered buying her flat even though it would have profited her personally. She used to talk about how pleased she was that her flat would continue as part of the social housing stock and would house a family in need. She was appalled by the Grenfell fire tragedy and campaigned against Rydon which was one of the contractors responsible. She attended many of the silent marches.

Our joint work was only part of her work for the movement. There was so much more and so much that we all have to thank her for.

Her heart lay in her commitment to social justice and her support for the NHS. She fought to defend our local hospital and this tribute from the secretary of that campaign, Shirley Franklin, sums it up:

‘So devastated that my feisty friend and comrade Alice Kilroy passed away today. She was a brilliant fighter for peace, socialism and social justice. And a fab banner maker. She was our very rigorous treasurer in Defend Whittington Hospital Coalition. And today it was confirmed that she has been awarded the Islington Mayor’s Civic Award. She knew it was going to happen. Big thanks to Alice for your tireless work for a better world.’ 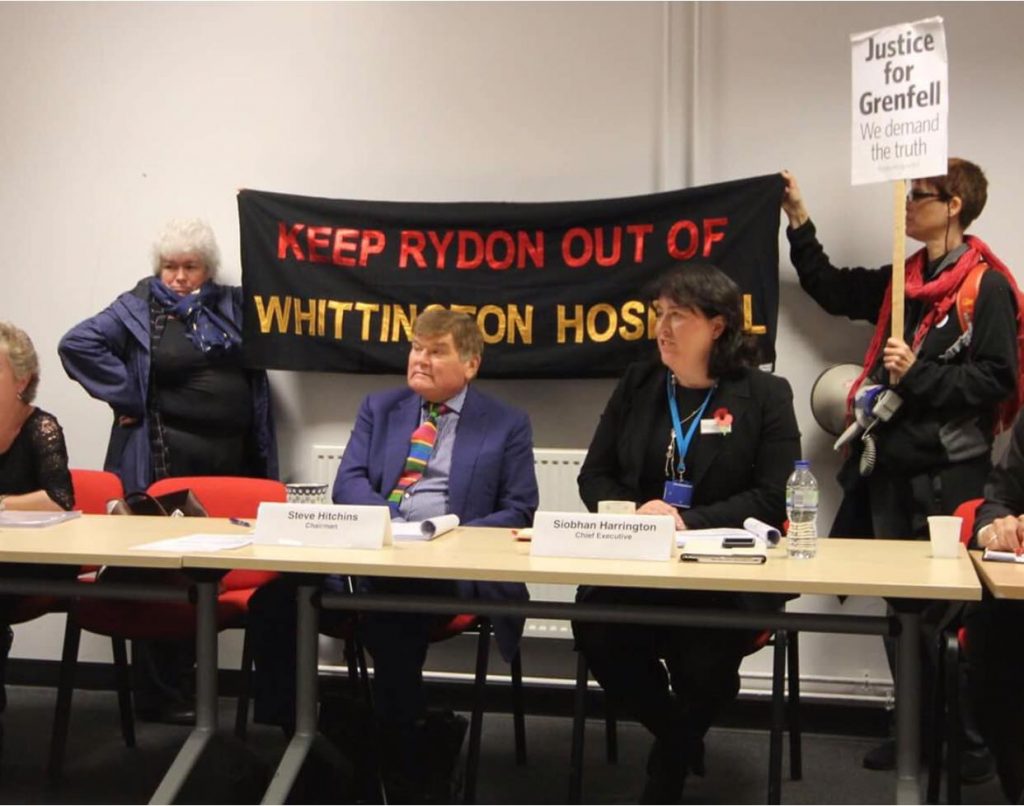 I want to mention some of the many campaigns that Alice supported or helped build. There will be many that I don’t know about but others will speak about them. And I want to talk about the personal help she gave me.

Alice was outraged at the way the families of soldiers in both the wars in Afghanistan and Iraq were treated. She supported the Military Families Against the War campaign for which she made the banners and she became close friends with some of the family members; she was close to Joan Humphries, the grandmother of Private Kevin Elliott, who was killed Afghanistan in 2009. She was always willing to put people up when they had to travel to London for meetings with MPs.

Over the years her embroidery, needlework and quilting skills developed to the point where she was able to create the most beautiful banners. Many have been exhibited. She used a very light netting fabric as the base which made the banners portable – essential for long demonstrations. Probably the most delicious of all was the one she made for the Lesbians and Gay Men Support the Miners banner which is truly a work of art. For many years she made costumes for the Notting Hill carnival which she loved to attend. 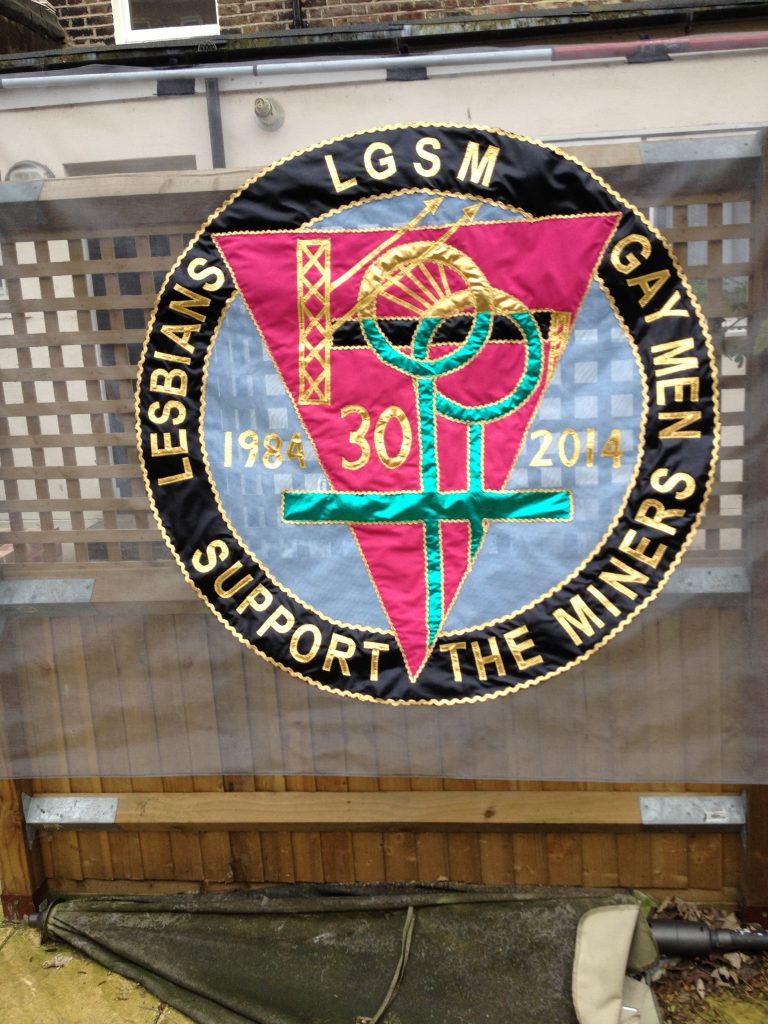 LGSM banner. This was the banner Alice thought this her finest creation.

She made the banners for the Greece Solidarity Campaign, for the anti-austerity Coalition of Resistance, for the No Pasaran conference, as well as banners for Stop the War, the Labour Party, Left Unity and many trades union branches. 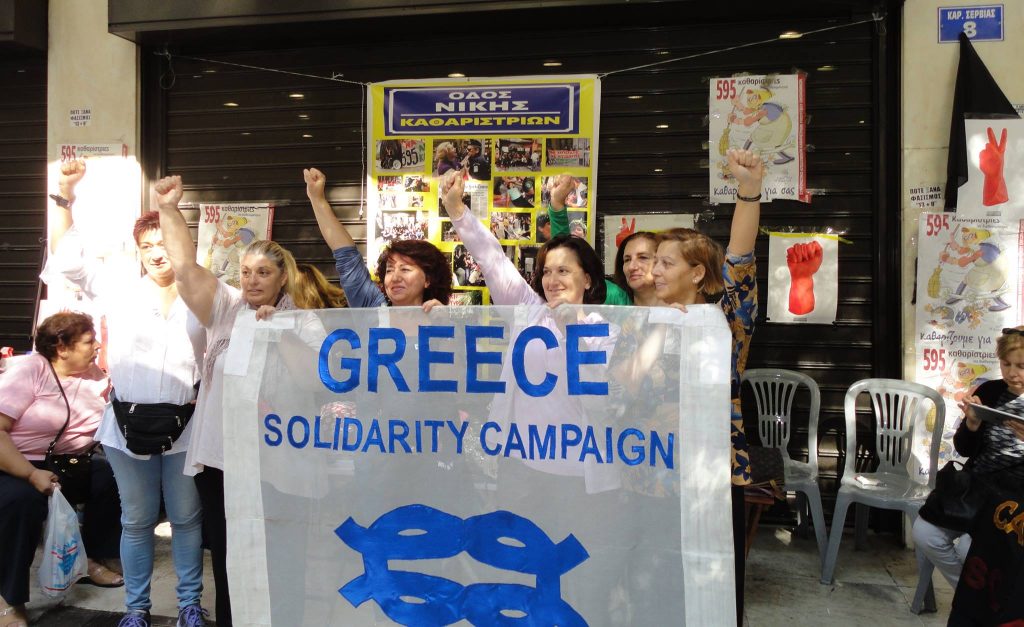 Representatives of the 595 sacked cleaners from the Ministry of finance welcome a delegation from the Greece Solidarity Campaign (14 Oct 2014) at the cleaners’ camp, outside the ministry of finance just south-west of Syntagma (Constitution) Square, Athens. Alice was very proud of this international solidarity work. 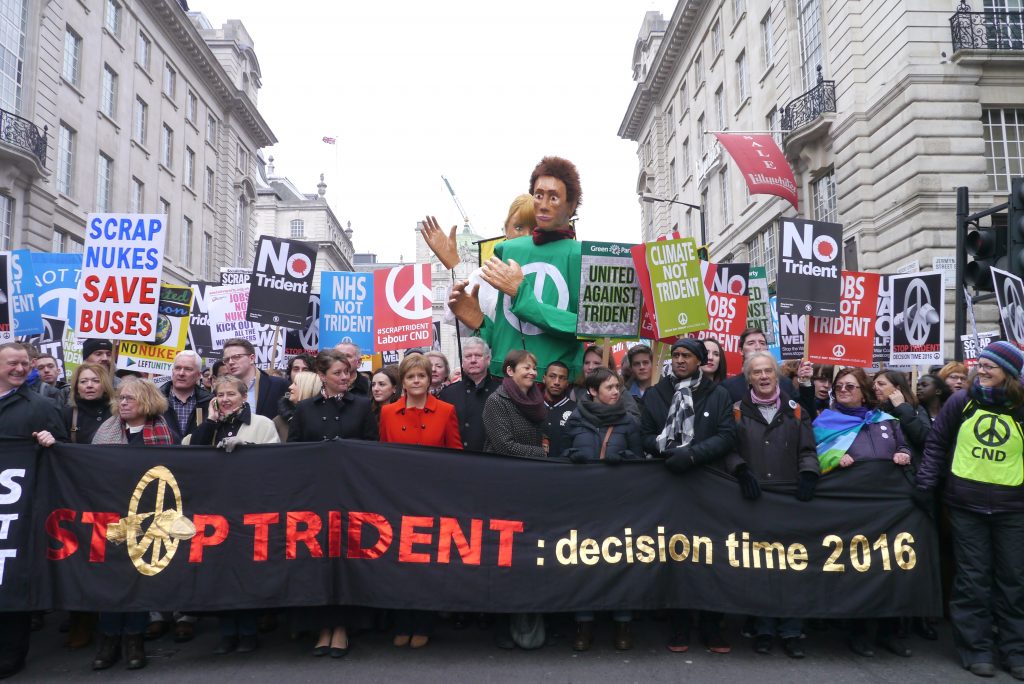 She was for a time a member of the radical left party Left Unity acting as a national officer and treasurer. She also made banners for practically every Left Unity branch. As soon as Jeremy Corbyn launched his leadership campaign she left Left Unity and rejoined the Labour Party. Jeremy was Alice’s local MP and she was fiercely loyal to him recognising in his leadership bid a renaissance for political life in Britain. Within a week of Jeremy making it onto the ballot for the leadership Alice had made a ‘Just for Jeremy’ banner which was used on the first ever campaigning stall supporting his leadership bid. She went on to make many others both for his campaign and for the local party. 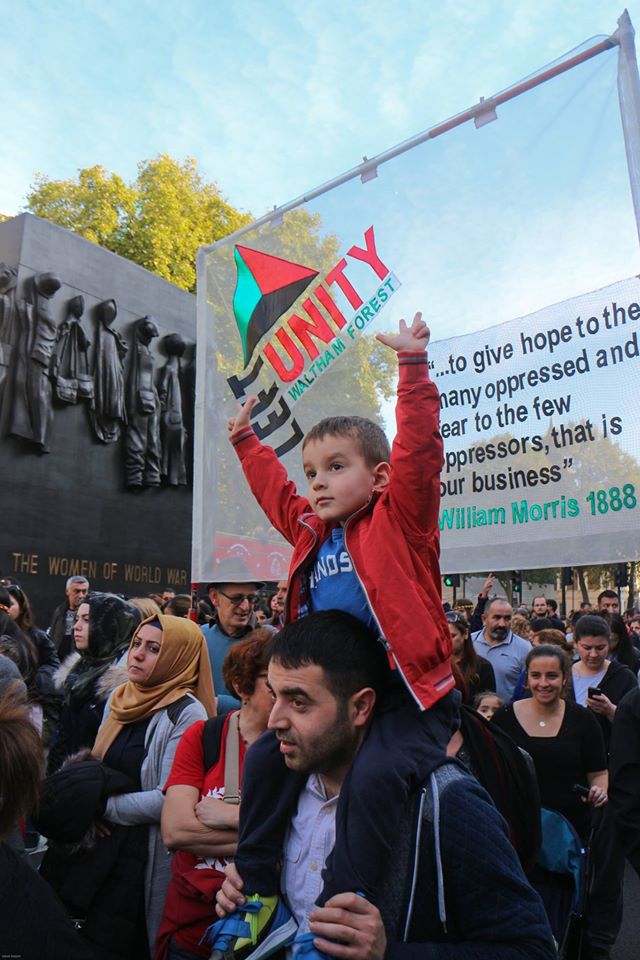 Although Alice had been opposed to Brexit she was even more opposed to right-wing remainers who sought to use the issue to undermine the Corbyn leadership of the Labour Party. She had no truck with those who sought to paint Jeremy as an anti-semite and a racist. Jeremy was a personal friend as well as being her MP. He visited her in hospital in December and she knew Jeremy’s deep commitment to the working class. She understood with a clarity that so many lacked that vilification of Jeremy Corbyn was driven by the establishment and his opponents in the party. 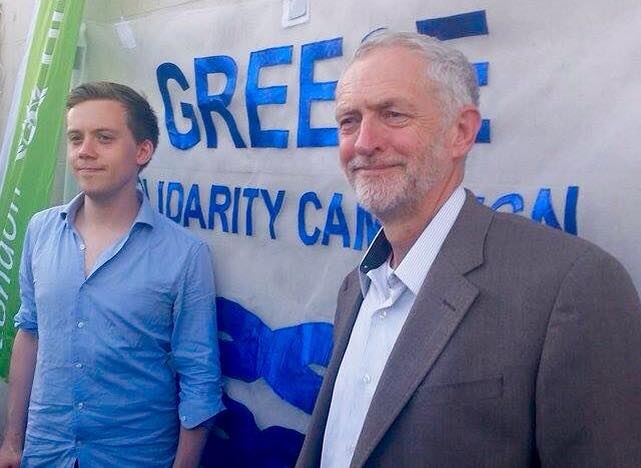 Jeremy and Owen Jones on Solidarity with Greece demo.

Alice and I set up the People’s Campaign for Corbyn facebook page but Alice ran the page and built the followers up to nearly 60,000. Some of the posts went viral such as the one with the photograph of Jeremy on the night bus. The page was a continuous source of support for Jeremy’s leadership and Alice was dedicated to using it to oppose those who were attacking him. 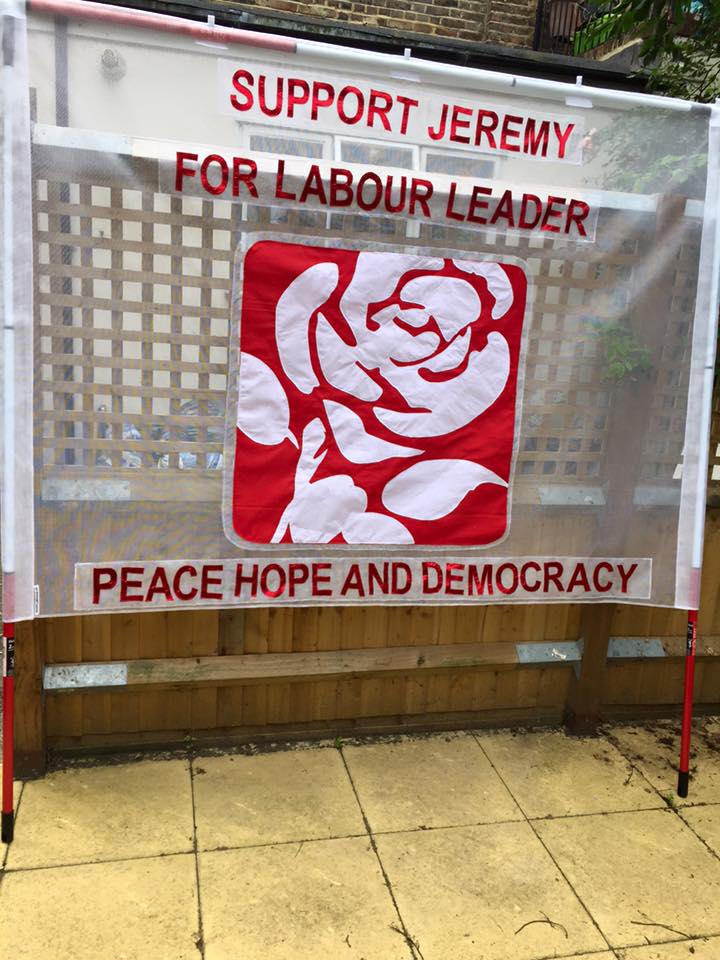 I have much to personally thank Alice for. She made me four incredible banners for a conference I organised in 2008 on the 40th anniversary of the May events of 1968. The banners were huge long quotations from the Situationist graffiti that littered the walls of Paris at that time: ‘Run Comrade, the old world is behind you’. She made a banner for my daughter’s 10th birthday – Holly is now 25 but we still have the banner. And she made banners for my 60th and for my wedding to Kate. The wedding banner is a fantastic hammer and sickle. And I need to say a special thanks because when I was ill with cancer and having chemotherapy and was temporarily homeless, she took us in. 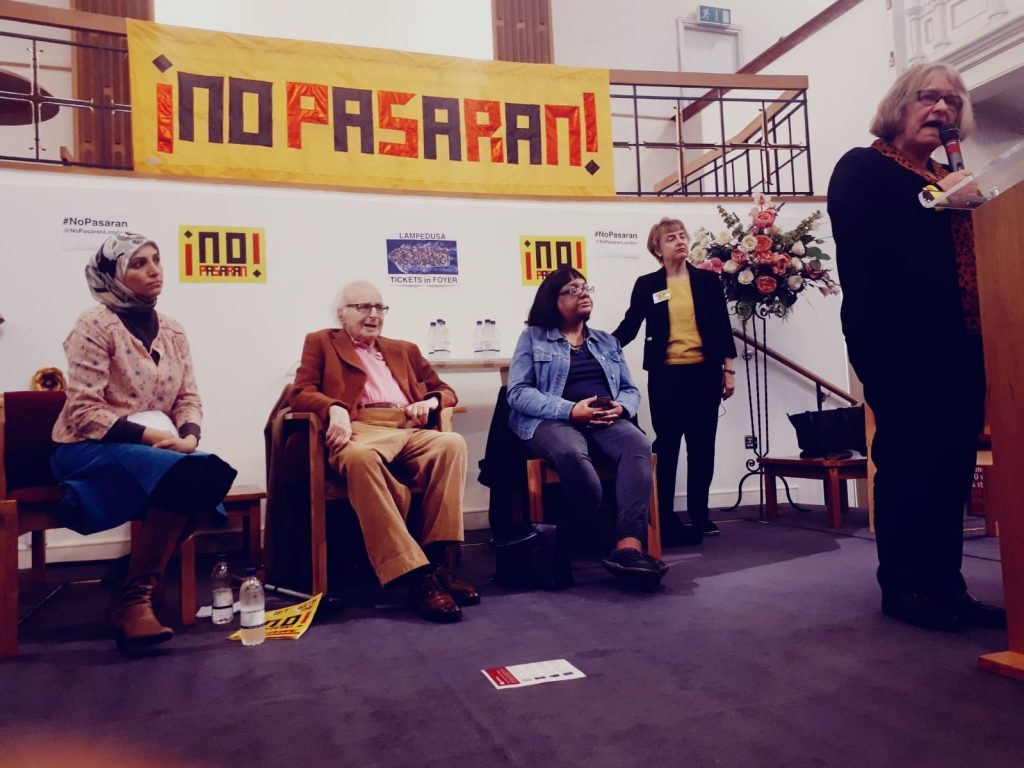 One of the last banners Alice made was for the No Pasaran conference. Lindsey German is speaking and on the platform is Salma Yaqoob, Walter Wolfgang –  sadly no longer with us, Diane Abbott and Chairing is Kate Hudson

Alice loved her daughter Stephanie above everything else. My thoughts are with Stephanie and with all Alice’s family and friends. Not only will she be much much missed but in a very real sense she is irreplaceable.