You are at:Home»Politics»Palestine»Ahed Tamimi: what it means for child of Israeli occupation to be a symbol of Palestinian resistance

Ahed Tamimi tells the story of her arrest and eight months in an Israeli prison – and the struggles she faces as a symbol of Palestinian resistance.

On December 15, 2017, Ahed Tamimi was filmed slapping an Israeli soldier after her 15-year-old cousin was shot at close range with a rubber-coated steel bullet. Film of the incident went viral and Tamimi was arrested four days later at her house in Nabi Saleh. She was sentenced to eight months in prison and a fine. Tamimi was one of 1467 Palestinian minors arrested by the Israeli army in 2017.

I am a child of the Israeli occupation. It has always been there. My first real memory is of my father’s arrest in 2004 and visiting him in prison. At the time, I was three years old; he has since been arrested on two further occasions. Last year, when I was 16, I was arrested too, during a nighttime raid, for slapping a soldier who was standing in our yard. I was sentenced to eight months in an Israeli prison.

Life behind bars was very hard. The guards woke us at 5.30am for the count and at 8am they returned to search the cells. Our doors opened at 10.30am, when we were let out for breakfast. Afterward, we would go to the other rooms, where I could talk to my fellow inmates. There were around 25 of us. We were not allowed outside and walked around in a big hall for exercise. Along with the other girls, I tried to make study groups, but the prison administration did not encourage this and broke up the class. Instead, we read books, and I managed to pass my final exams in prison. Only my immediate family was allowed to visit me, and that was limited to 45 minutes through a glass barrier every two months.

Through my arrest, I became the symbol of the occupation, but there are 300 other children in Israeli jails whose stories no one knows. Nurhan Awwad was arrested when she was 16 and sentenced to 13 years in prison. It is said that she tried to kill a soldier. Nurhan was walking with her cousin, who was shot and killed in front of her eyes. Israeli security forces also shot Nurhan, who was sent to hospital. From there, they took her to prison on a 13-year sentence. She is 18 today. The youngest girl in prison is Hadia Arainat. She is 16 and has already served three years; she should be released in four months. They say that she also tried to kill a soldier; she was on her way to school in Jericho at the time of her arrest. 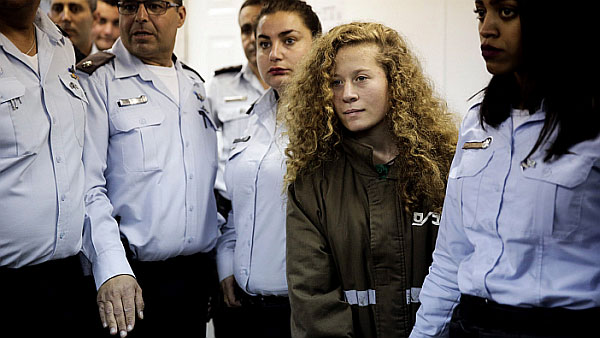 Since I was released on July 29, I have become a spokesperson for the Palestinian cause, which is not easy. With this role comes a great deal of responsibility and pressure. In parallel, I am on a suspended sentence for the next five years; if I say something they don’t like, I can be imprisoned for another eight months. I must tread carefully. People often ask where I find my strength and courage to stand up to the occupation, but I am experiencing a situation which forces me to be strong. Of course, it is also due to the influence of my parents. They remain my biggest inspiration. Yet I believe that everyone in my village is like me; I am not special. Do I sometimes wish that I could just let go and not be strong? No. Under occupation, you must be. I have always challenged my fear and found the strength I needed.

If there was no occupation and Palestine was a normal country, I would move to Acre and live by the sea and go swimming. I have only been once – even if the water is only 30km from my house. Some years ago, during Ramadan, Israel gave us permission to visit Jerusalem. On that day, my dad took us kids to the sea. We were afraid, of course, because it was illegal – the permit we had only allowed us to stay in Jerusalem for a few hours, but my father was determined.

I want to be a regular 17-year-old. I like clothes, I like makeup. I get up in the morning, check my Instagram, have breakfast, and walk in the hills around the village. Sometimes I go to Ramallah with friends to go bowling, eat ice cream, and go to restaurants – but I am not a normal teenager. Both my parents have been in jail, as have I, and now my eldest brother, Waed, is imprisoned too. If I were permitted to be a regular teenager living in a normal country, I would play sports. I wanted to become a football player but I don’t play here because there is no time. Instead, I have been involved in demonstrations and confrontations with the Israeli army since I was a child. Many criticize that, but why not criticize the army who places itself in front of children? Under the occupation, everything is a crime. People should not accuse us; it is the occupation that is wrong.

Everything we Palestinians do is a reaction against the occupation. I do not see any signs of improvement. On the contrary – the settlements will continue to expand and there will be even more checkpoints; that is what I see three years from now in the West Bank. Yet, we still aspire that one day we will live in a free Palestine. Two states will never come to pass. We believed that the Oslo Accords (signed in 1993 and 1995) would serve as a step to eventually achieve this – but look at the situation today.

“Now that I’ve completed high school, I want to study law, although I do not know where. I have a dream to work internationally, five years from now, doing high-level advocacy for Palestine and speaking at the International Criminal Court in the Hague.

I understand that I have this role now, but I have no privacy any more. Sometimes I feel like I am losing myself – my personality. People ask me what life was like in prison, but I wish I didn’t have to talk about it. I just want to forget.”

Join the National Demonstation for Palestine 11 May 2019 Details…