You are at:Home»Politics»Brexit»First stage of coup defeated – now the battle gets serious

The first phase of Johnson’s coup has been defeated. The attempt to force through a no deal Brexit by suspending parliament failed. This was because it was out-manoeuvred at a parliamentary level, but also because of the mass movement. The astonishing mobilisation on the streets, involving some hundreds of thousands, boosted the Labour leadership and helped change the political situation. Labour is right to insist on passing anti-hard Brexit legislation before accepting an election. The road to defeating Johnson’s hard-right plans goes through the fight to defeat a no-deal Brexit.

Without a doubt the street mobilisations have been in part inspired by Extinction Rebellion. The boldness and civil disobedience tactics of ER, together with the school climate strikes, has struck a major chord with the public, especially the youth, in the light of the inspiring example of Greta Thunberg – and of course the ongoing climate crisis exemplified by the fires in the Amazon and the Greenland melting. The spontaneous unity of the Extinction Rebellion and anti-coup demonstrators in occupying Manchester’s Deansgate is symbolic of this. The fight against climate extinction is also the fight against the hard right. 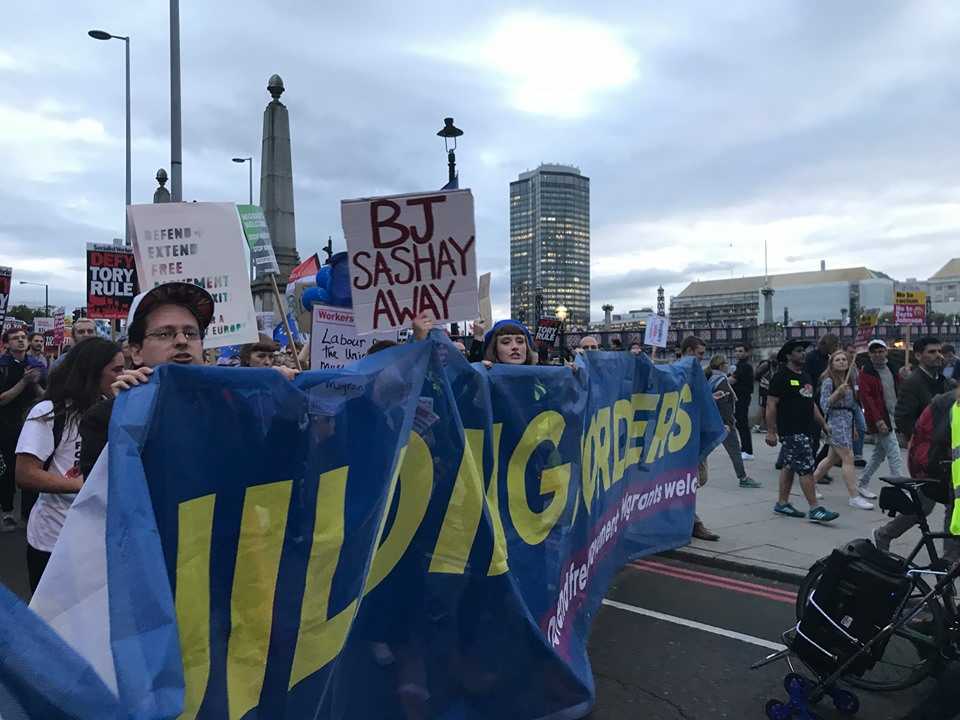 The mass movement transformed the situation for Corbyn and Labour. Jeremy Corbyn has been de facto the central spokesperson of the anti-hard Brexit forces in parliament and the country. The anti-Corbyn Labour right-wing has been caught off guard by this, although on Wednesday Jess Phillips made an aggressive anti-Tory Commons speech in an attempt to get back in the limelight. But some of the right – Stephen Kinnock, Caroline Flint and about eight others – have been in the pro-Brexit camp and foolishly tried to bring Theresa May’s plan back from the grave.

The defeat of stage one of the coup has forced Johnson to reach for his major weapon, the preparation of a general election. This will be an elaborately prepared carnival of reaction. Johnson’s speech on Thursday in front of massed ranks of police gave a flavour of what is to come. It is the beginning of the Trumpisation of his campaign. Mass meetings featuring xenophobia, Islamophobia, anti-Europe nationalism and attacks on unions, benefit claimants and the alleged liberal elite are being prepared, especially in those Labour areas where there was a big Leave vote. An alliance with the Brexit Party is central to this road to victory for Johnson.

Nigel Farage is quite right that he personally is the key to a Johnson victory. If Johnson meets a number of preconditions – hard Brexit or nothing! – the Brexit party faithful will be mobilised for Johnson. At a certain stage it is quite possible his rallies will also feature Farage.

This Saturday’s demo by the Football Lads Alliance – ‘Support Boris and the Queen’ – will be an indicator of the scale of the reaction to come. The reactionary onslaught will of course be led by the Tory press, with the Sun and the Mail in the vanguard

The whole of the Left must completely reject the Johnson-Brexit line that the government is fighting to implement the democratic will of the people as indicated by the 2016 referendum outcome. The 2016 Brexit referendum was not a democratic exercise and, in any case, the British people did not vote for a hard Brexit – on the contrary they were told a trade deal with Europe would be easy and everything would be tickety-boo, European UK residents would be safe etc etc. This has now been revealed as rubbish. In fact a softer Brexit was available in May’s plan, and not passed largely because the Tory right (and DUP) wanted only a hard Brexit. In this sense it is ridiculous for the Morning Star to say that Parliament has frustrated the democratic will of the people. That is repeating Johnson’s line.

Any attempt to further impose a disruption of the anti-hard Brexit bill by some new parliamentary trickery would be a continuation of the coup. This now seems unlikely. The battle will unfold – eventually on the electoral terrain around implementing a hard Brexit. For the moment the central issue for the left is to defeat a hard Brexit. This is because, as this site has argued repeatedly, Brexit will be a massive attack on working class living standards, on the rights of immigrant workers, as well as aligning Britain with the US against China and the European Union.

Further, Brexit is the centre-piece of a prolonged campaign by the Tory right to impose a hard right government, smash up the post-war welfare state consensus and hobble the workers’ movement with more anti-democratic measures against the unions, strikes, demonstrations, the right to organise etc. The imposition of a Johnson government, inspired by the ideas of Britain Unchained and by the examples of Trump, Bolsonaro and Salvini, would not signal a fascist government – but would be an important step on the road of Creeping Fascism.

What would an electoral victory for Johnson mean? First, a hard Brexit. This, contrary to what some on the left think, is completely opposed to the interests of the working class. A crashing pound and trade chaos will cause a massive surge in prices. Wednesday’s Daily Telegraph produced a special report saying that Britain was already in recession, and this is likely to worsen with a hard Brexit.i A repeat of the 2008 financial crash, which Brexit and austerity make more likely, would result in a massive attack on the savings and living standards of millions of British workers.

Hundreds of thousands of immigrant workers will be in limbo, and open to deportation. The Tories have already indicated that family reunion for children will be ended. EU legislation on working conditions and the environment will be ended.

Under a Johnson government Britain will become a vassal state of the United States, forced to accept a UK-US trade deal that would open up all public services to US companies. Britain would lamely follow Trump in international politics, likely breaking with the Iran nuclear deal and aping his China trade sanctions.

The coup crisis has shaken up British politics across the board. The purge of the Tory MPs, unthinkable even under Thatcher, shows the ruthlessness of the domination of the hard right. It reflects a split in the capitalist class itself, with Phillip Hammond and friends representing the interests of both finance capital and major industrial forms. This is likely now to further deepen pressure for a new centre party. It is unclear whether this will simply be another regroupment around the Liberal Democrats. Their recruitment of pro-privatisation and homophobic ex-Tory MP Philip Lee shows the contradictions of the LibDems, and the difficulties they will have with their right-wing past in the coalition government. It is noticeable however that the resignation of Luciana Berger from Labour to join the LibDems has been hardly noticed. Her decision to work inside the Liberal Democrats may be motivated by factors other than the Brexit controversy.

The coming election will be the most tumultuous and decisive since 1979. Now the whole labour movement must proceed to wage a massive campaign against the Trumpisation of British politics. All the forces of social progress must be challenged with the choice – either a left Labour government or a hard-right government aligned with Trump, Salvini and Le Pen. In particular, a fight must be waged with all anti-Brexit forces against voting for the Liberal Democrats. Only a Corbyn government can stop a hard Brexit.